Search
A Ski for All Snowshoers

Sitzmark Ski Area, Washington. It was a world-record gathering of ‘Hoksters’ with over 75 people either bringing their own Hoks or wanting to test the ‘demo’ Hoks brought to the event by Altai 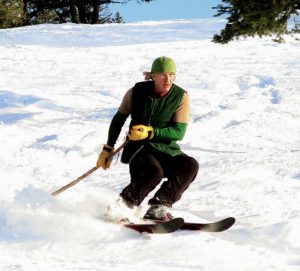 Nils Larsen, one of the co-developers of the Hok (a skinned ski or a ‘skishoe’), carving smooth turns on the descent of a hill he had just climbed with the same boards.

Skis headquartered in Curlew, Washington. “We’ve never had this many people skiing Hoks at one event before,” said Nils Larsen, one of the co-owners of Altai Skis.

The occasion here at Sitzmark, a community ski hill located 20 miles northeast of Tonasket, was the HokFest, the first event of its kind celebrating a product that some would call a sliding snowshoe, others a grippy ski. The Hok (pronounced hawk) is a short (125 cm or 145 cm), wide ski that has a permanent climbing skin covering about half of its length. The skin and short length allow the ski to climb quite well; yet when pointed downhill, it delivers a moderate but not overly fast glide.

About a third of the 75 participants of the event had brought Hoks they owned and were looking for tips to use these ‘skishoes’ with greater proficiency. The other two-thirds were testing the product. Snowshoes, they knew, were easy to master but also tedious to use, particularly coming downhill when gravity might make a decent more enjoyable on skis. Meanwhile, they knew cross-country skis were fun on gentle terrain but easy to pile-up on steeper slopes or in tricky snow conditions.

The Hok, these testers hoped, might solve these problems and give users a product that  walked uphill like a maneuverable snowshoe yet came downhill like a controllable ski. In other words it might deliver the best of both worlds – which is why people came from Seattle, Twisp, Mazama, Republic, and Spokane to give the Hoks a go. 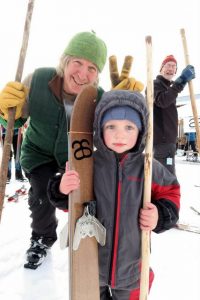 Hok’s come in a junior size and in two sizes for adults.

So I came, not knowing what I was missing, but a little pessimistic that the Hoks would offer me something that my downhill skis, backcountry skis, cross-country skis, or snowshoes couldn’t do better.

My bias cracked a smidge when I ran into Don Portman from Winthrop. Don has become an enthusiastic Hokster and was showing newbies like me how versatile these skishoes were on both sides of the equation – going up and coming down. In the Nordic worlds of skate, classic, and telemark skiing, Portman is a skier’s skier and a Northwestern legend, so the fact that the Hoks filled a niche for him carried weight. 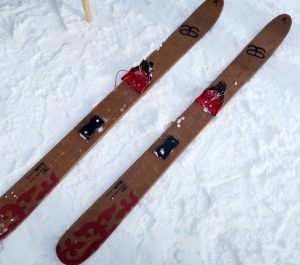 He told me he valued these short, fat boards because he could just clip them on and go – no waxing or scraping, no skinning or deskinning, no tightening or loosening of boots, no clamping or unhinging of bindings. “I can ski the local hills, climb a snowed-over road, or wander through forests near my house with no fiddling of gear. Even if I only have 30 minutes, it’s enough to do something fun in the snow.” Binding options for the Hoks include three-pin bindings (pictured) for use with light weight telemark boots and the universal binding accommodating many different boots.

Portman insisted, however, the Hoks were not just for knocking around or casual snow play. He has also enjoyed using them on ski tours of intermediate difficulty because there was none of the usual fiddling with skis, skins, and boots. “Friends tease me that I should be on ‘real’ skis but then I ask them, ‘Who’s the first one up and the first one down?’” 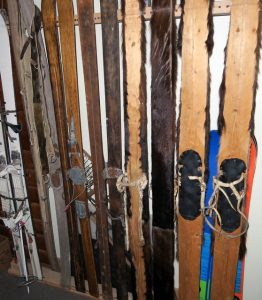 I received a little clinic on descending with the Hoks from Portman and immediately saw  that, when using flimsy boots, the secret to the system’s stability and versatility was ditching the two-pole technique of normal skiing, and adopting the old (and mainly forgotten) technique of using a single staff. The indigenous people of the Altai Mountains in China have skied on skinned skis for thousands of years (really!) and have used the single staff they call a ‘tiak’ (pronounced tieyak) to maintain stability when skiing downhill with slipper-like boots attached by rawhide bindings to long skis. The staff provides a third leg of support and allows one to charge downhill and swerve around obstacles despite flimsy footwear. 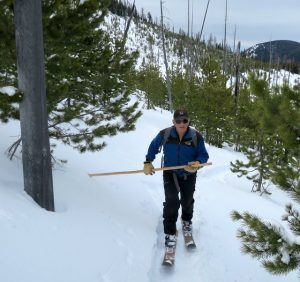 Portman showed me how to position my weight back, but not too far back, on the staff and how to roll my knees toward the direction I wanted to turn. After only two runs, I Hoked down a moderately tight tree run sprinkled with inconsistent snow that I would have been hesitant to ski. Next I talked to John Magoteaux of Curlew, Washington who arrived with his own Hoks and was descending Sitzmark executing smooth, fluid turns using a tiak. He showed me some of the finer points of positioning the tiak for better balance, which helped me negotiate the steeper slopes on the ski hill. I could control the terrain with these lightweight skis and my flimsy leather boots partly because the skins scrubbed some of the downhill speed of normal skis, partly because the tiak created such an effective tripod to stabilize balance. With these factors in play, it didn’t take that much talent to come down the hill on my feet rather than my face. 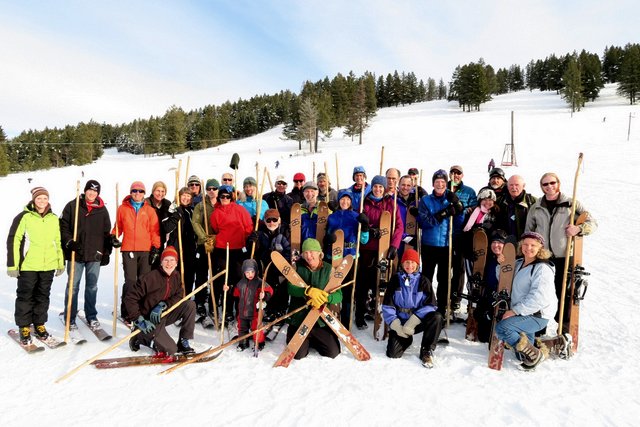 About half of the participants in Hok Fest.

Magoteaux told me, “I’ve got several pairs of snowshoes in the garage but, since my wife and I started using the Hoks, the snowshoes have become so dusty I can’t even see their logos.” Later I talked to Linda Green a Forest Service employee living near Curlew. Similar to  Portman, she likes skiing anywhere – fields, hills, mountains, forests, roads — using the Hoks because there’s no fussing. You put them on and go … up or down. An intermediate telemark skier, she was initially reluctant to use a tiak. “For quite a while I tried to do traditional telemark turns with the Hoks using two ski poles and I was falling in difficult snows and getting frustrated. When I switched to the tiak, I stopped falling.” 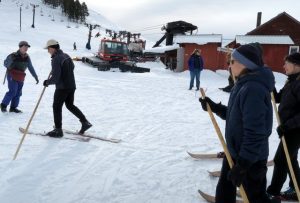 Toward the end of the day I skied with Nils Larsen from Altai Skis and the co-designer of its products. We skied a slope with variable snows and some underlying brush that would have slowed me down and even been potentially dangerous on normal skis. With our weight back slightly on the tiak and our ski tips rising out of the snowpack, we skimmed over these areas quite easily.

Larsen told me how he adopted what he learned while skiing with skinned skis and tiaks from the skiers of the Altai Mountains in China. He’s modernized their skis, skins, and bindings but this was really ancient technology that worked. His is a story about going forward to the past. Using the tiak took time to embrace because Larsen was a product of modern two-pole skiing. Two-pole skiing has its place for good skiers using stiff, more supportive, and heavier equipment. Larsen, however, was striving to make a lightweight, no-fuss, versatile, go-anywhere ski system and, using two-pole technique, he was incapable of keeping up with Chinese, herdsmen who were flying down the mountains on low-tech gear with a tiak. “As soon as I switched over, I realized that the third point of stability solved all the issues of lightweight gear, flexible boots, short skis, and variable snow. Plus just having one thing in your hands is so much simpler.” 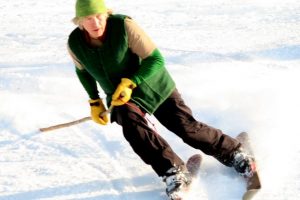 The other issue Larsen was trying to solve with his simplified system pertained to cost. “Backcountry skiing is really expensive. Skis, boots, bindings, poles, and skins can easily run $2400 if you’re buying everything new. We wanted the cost of using Hoks similar to the cost of using a high-end snowshoe.” The Hoks run $220 for the skinned ski. Then, depending on what boots you already own and plan to use with the boards, bindings will run $65 (3-pin telemark binding) to $108 (a hinged universal binding accommodating many boots). Given that high-end snowshoes run $200 to $300 per pair, Larsen has remained in sight of his affordability goal. 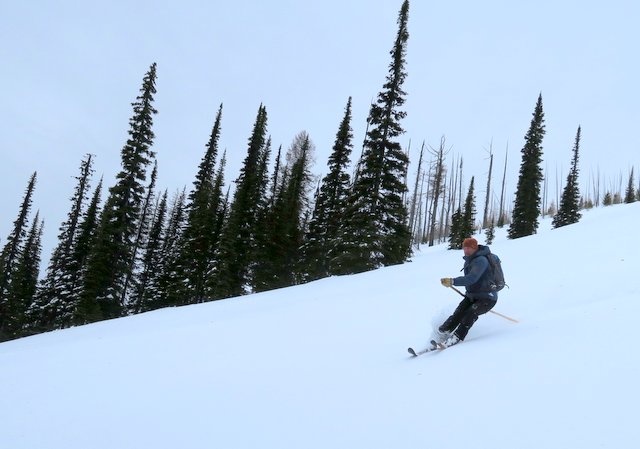 A day at HokFest either brainwashed me or helped me see the light — I headed home with a  new purchase. The next day I headed out my door and skied a slope next to my house. The snowpack was only a few inches deep and stumps of burnt sagebrush and blades of grass stuck out of the snow. Keeping my weight back on the single staff, I skied down a hill of intermediate steepness wearing lightweight leather boots. I had good control and, with my weight back slightly and stabilized by the tiak, I did not feel reckless skiing a slope with so little snow. This would not have been the case with normal skis — they would have slid too fast and having them bottom out on dirt or a stump could have easily sent me soft face flying toward something hard. Without needing to remove the skis, skin up, or loosen boots, I climbed back up and repeated the circuit. Already I had other slopes in mind for the next day. The others were right: I hadn’t known what I was missing.