This meandering stretch of river offers a surprising sense of wilderness considering its close proximity to civilization. The sandbar on which we camped was laced with bear tracks and the land seemed so untouched that it was a shock to catch a rare glimpse of a road or pass under a bridge and be reminded of the nearby human presence. Views from this teal-tinted river vary from gray-walled ridgelines to silver-snagged marshlands thriving with birdlife. The presence of snags and log jams makes the river something of an obstacle course and this adds a little excitement to what is also a very scenic paddle.

Skill Level: 2 (advanced beginner to intermediate paddling skills). While there’s no whitewater, there are sweepers and log jams to contend with. In places you need to maneuver well to get through narrow gaps flanked by woody debris. In other places you may need to get over to the bank quickly to portage around logs that are completely blocking the river.

Distance. About 8 river miles (one way).

Photo: At the take-out along the banks of Lake Wenatchee

Recommended Season: Summer. Even in August this section of river with its flat grade seems to hold enough water to accommodate canoeists and flatwater kayakers.

Hazards and Annoyances. The river is littered with snags. The majority of the time it is only the occasional branch or log, but a few jams require some more complicated maneuvering to pass and, at one point, fallen trees have entirely blocked the river and it is necessary to drag boat over a gravel bar to get past. Also, bugs are often bad in the summer if you’re on the river banks. We’ve camped on this stretch of river because it is kind of wild and has a remote feel (even though it isn’t remote). We found the mosquitoes to be terrible at dusk but then not a problem later in the evening and the next morning when it was still cool. Even during those hours when the bugs are terrible on shore, they’re not a problem while you’re paddling out on the river.

Land Designation. The riverbanks are a combination of Chelan-Douglas Land Trust, Fish and Wildlife, private properties.

Condition Update. July 26, 2009. Carolyn Griffin Bugert reports, “…canoed the White River from the Sears Bridge down to the bridge on the Little Wenatchee Road. Great conditions. The river was slow moving which gave plenty of time to negotiate around obstacles. The river was totally obstructed in only one place–less than a quarter of a mile up river above the take-out bridge. The river was moving so slowly that it was easy to pull the canoe over the top of the downed logs and continue on. Mosquitoes were fierce at the shoreline (we pretty much launched the canoe at a dead run!). But once you got on the river it was almost bug free. Very pleasant. Very scenic. Very fun.”

Usage Update. September 2009. The White River at the head of Lake Wenatchee is now closed to motorized boats and personal watercraft. Chelan County commissioners just voted to add the river to the list of waters closed to motorized traffic, which also includes the Wenatchee River, Icicle Creek, Lily and Clear lakes, and Beehive Reservoir. Electric trolling motors are still allowed in the river.

Leave It Better Than You Found It. This should be every user’s goal. Pick up trash left by others, pull noxious weeds along your route, disperse old fire rings, throw branches over unwanted spur trails… 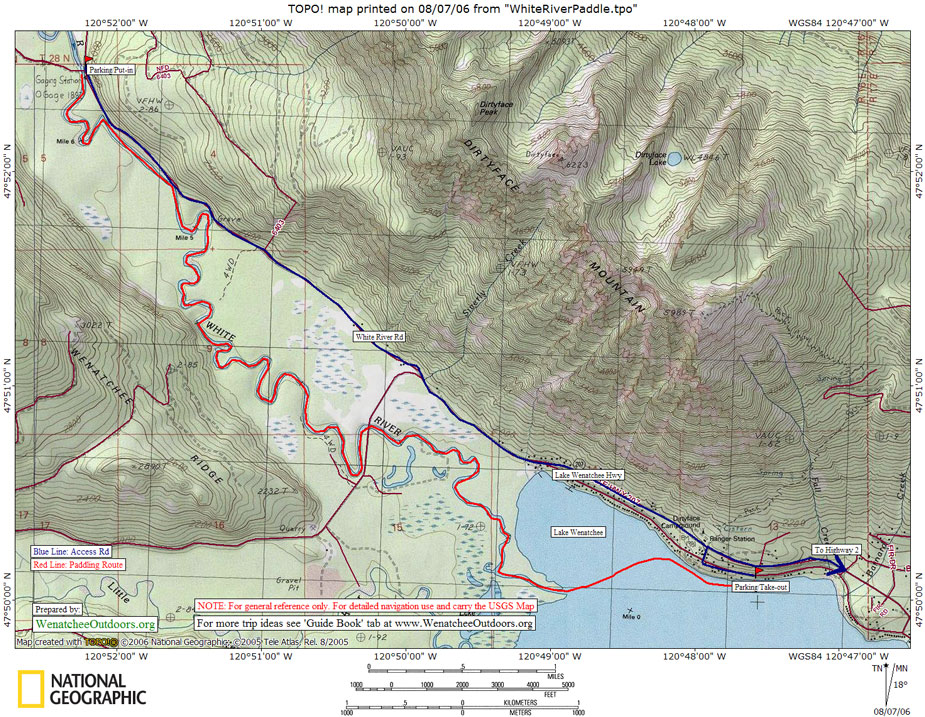