Photo: Chris Sheridan, at the top of Peak 4, looking for Heaven’s door.

seventh heaven, noun.  1. (Islam and the cabala) The highest heaven and the farthest of the concentric spheres where, God, the exalted angels, and the stars dwell.  2. A state of intense happiness; bliss. 3. (Stevens Pass resort)  A chairlift accessing blissful, north-facing powder slopes. 4. (Stevens Pass backcountry) A traverse where backcountry skiers might encounter bliss… or God.

Should we call it the Seven Peaks Tour? Or should we play off the name of the lift at Stevens Pass and call this the Seventh Heaven Tour? It’s a hard question to answer until the tour is done, so away we go.

Chris Sheridan, Tom Janisch, and I leave Highway 2 from the opposite side of the Stevens Pass Ski Area and tour up the snowed-over road servicing the radio towers below Skyline Lake. The headlamps click off at Skyline Lake and, by natural light, we climb Peak 5,447’ to the northeast. It’s cold and windy on the summit but, as we drop onto north-facing slopes, we enjoy a thousand vertical feet of boot-top powder. The morning sky is still sunless but all three of us are shining inside.  Chris is awake enough now to actually smile. “That was so much better than I expected.” Photo: Descending the north side of Peak 1. Either the light is still dim or the dim photographer has the shakes. Tom cuts a trail up to the south ridge of Tye Peak before following that bald ridge to the 5,476-foot  summit. The ridge has been hammered by both southerly and easterly winds and, while our intent had been to ski the open southeasterly slopes off the summit, they are just too wind-scoured and icy. With the Chelan-King county border running over the top of this peak, we can actually say all the good snow has been blown into the next county.

Descending the north side of Peak 2 (Tye Peak).

We follow the good snow and drop to the north again. A little stiffness has been swirled into the mix here but, compared to the scoured southern slopes, we feel a step closer to Heaven’s highest circle.

Chris takes the next lead up the southeastern shoulder of Peak 5,361, a rounded mound capping one corner of the Nason Creek drainage. From the top, the view across to the Big Kahuna of this drainage, Lichtenberg Mountain, is stunning. Its slopes are European looking in both bigness and bareness. “Are we doing that one too?” Chris asks with more than a hint of lust. Photo: The sirens of Lichtenberg (that would be the slopes in the background, not the beauties in the foreground).

There’s no real reason why a Seven Peaks Tour couldn’t include Lichtenberg, but our rules of engagement arbitrarily chose peaks actually occupying the Cascade Crest. Because Lichtenberg lies a mile east of the crest, we scratched it from our list. I console Chris, that Lichtenberg is a siren beckoning us to our ruin. “Those southwestern slopes appear beautiful, but they’ll be wind and sun crusted today.” Instead, we ski the silky north-ridge of the peak, then hook right and glide through lofty old-growth hemlocks. We skin up feeling ourselves ever closer to the dwelling place of stars. Photo: On top of Peak 5 with Peak 6 (Mt. McCausland) on right, Glacier Peak on left.

Our final ascent up the northwest ridge of Union Peak is one of the day’s wildcards. The angle of repose is gentle, yet the slopes are precipitous on either side of the narrow ridge crest. It’s the type of place that could build cornices to stymie us. We reach a notch in that ridge via pleasant forests and, with only 900 feet of climbing left in this long day, Chris announces that we’ll have the vertical mastered within an hour.

The ridge has other designs for us. Drifts form a series of stair steps that are challenging to surmount on skinned skis, especially since the narrow crest affords so little room to contour. Tom won’t be deterred and stubbornly stomps steep zigzag stitches through the drifts. Both Chris and I are grateful we have an ox (and lots of tree branches) to pull us up this last pitch. Photo: Nearing the top of Union Peak after surmounting the difficulties of the NW ridge.

Ninety minutes after Chris threw down his karmic challenge, we step on the summit. The sun balances on the horizon and we enjoy golden light reflecting off the facets of the thousand jeweled slopes around us. All those peaks mock the small mindedness of our Seven Peaks Tour. With another thousand days, we could turn this into the 7,000 Peaks Tour. Our final descent also dishes out difficulties. The southeastern ridge and then the southwest- facing forests we traverse have been kissed by wind and sun. Only the snow hiding in the deepest shade is protected from a crust. Soft snow with the slap of branches across the cheek or crusty snow with elbow room – the options move us downhill slowly.

It’s almost dark when we intersect the Smith Brook Road. After struggling to get up and off this last peak, polishing off the tour with an easy three-mile glide back to the highway is Heaven – maybe even Seventh Heaven. Chris Sheridan hating life on the north side of Tye Peak.

General  Comment. This tour can be tailored to accommodate the skill and fitness levels of many groups. Most of the peaks have different aspects of different difficulties to ski. Also, if you’re moving slower than necessary to tag all the peaks, you can pull the plug at most any time and return to Highway 2 by descending Nason Creek to the Yodelin Place Road.

Skill: 2+ to 3 (advanced intermediate to advanced). The tour as described has some advanced terrain, but intermediate skiers only need to modify a few of the steeper descent to take on this traverse.

Fitness: 2+ to 4 (strong intermediate to expert). The entire tour as listed is a long day (8,200 vertical feet). By modifying the number of peaks climbed, however, traversing through this terrain can be structured as a moderate effort.

Access. Drive Highway 2 to Stevens Pass and park in the lot on the north side of the highway. If it’s a weekend, take one of the easternmost stalls (farthest from the ski lifts). Downhill skiers pay for the plowing, so let them park closer to the lifts.

Return. The tour as described exits the Smith Brook Road about 3.75 miles east of Stevens Pass. You can leave a shuttle vehicle  at the large plowed pullout on the north side of the westbound lanes of Highway 2 at milepost 68.7.  Naturally having the most respectable-looking person in your party hitchhike back to the pass for the car is another option. If you bail early from the tour you’re likely to descend Nason Creek and follow Yodelin Place Road back to Highway 2. This leaves you abut 1.5 miles east Stevens Pass.

Map. See and print our topographic map of this route (below).

Snow conditions. Use our ‘Skiing’ Condition Reports to evaluate the snow and avalanche conditions before you head out.  Also, check the Snow& Ski User Reports to see what others are reporting about the current backcountry conditions. 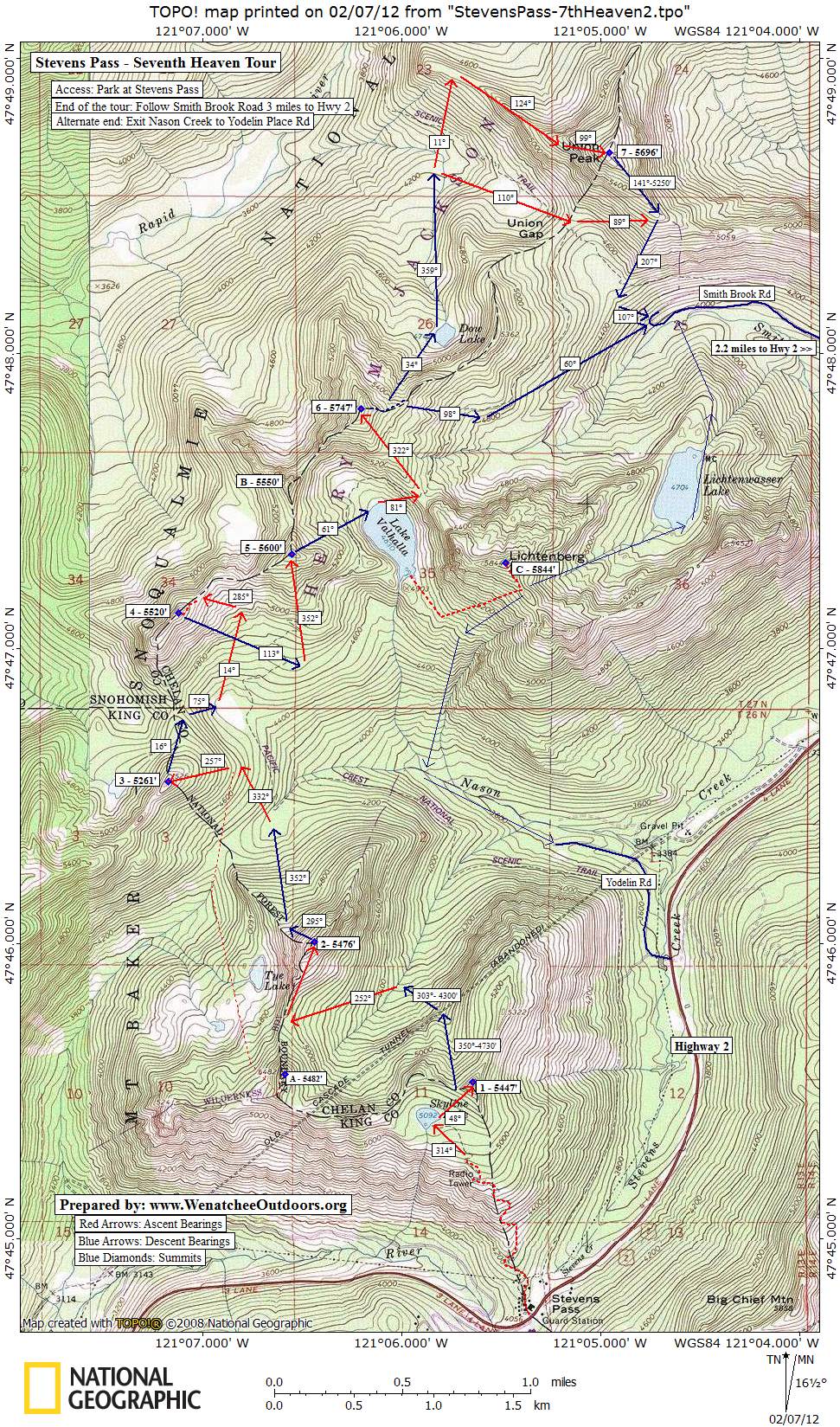