Urban legend maintains that the Inuits possess some 49 words for ‘snow’ while Westerners identify all frozen matter falling from the sky or sitting on the ground with the same label.  Naturally every backcountry skier understands what a total load of BS this legend is. Like indigenous people who lived in the snow, we maintain a rich vocabulary that helps us better understand the white matter at the core of our activity.

To name just a few snow forms, we’ve got: powder, corn, ice, blue ice, Styrofoam, breakable crust, sugar snow, temperature-gradient snow, sastrugi, equi-temperature snow, and rime on the ground. Falling from the sky we might have stellar crystals, needles, columns, plates, graupel, hail, or sleet. And then there are all those technical terms born from the annals of  ski journalism, including phrases like ‘snorkel powder’, ‘blower  powder’, and ‘cold smoke’ to describe the euphoric  pole of the white spectrum. At the other end of the spectrum where character is built, we’ve got, sludge,  concrete,  breakable crust, trap crust, and body-slamming death cookies. The gratifying thing about ski touring in the Cascades — rather than somewhere like Colorado where nothing but champagne powder graces the ground, or Utah where only four-percent powder spills from the sky — is that we get to ski it all. We can enjoy everything from blower to body-slamming forms of snow …and not just throughout the season but frequently on the same day.

The entertainment and humility of skiing countless snow types was dished up to us over the weekend as Tom Janisch, Adam Vognild, and I climbed from Highway 2 to Rock Mountain, and then yoyoed over Mount Howard and Mount Mastiff before returning to the highway. Leaving the car at 6:30 a.m. we booted up clearcuts under high-tension powerlines with just the nubs of our boots penetrating the ice armor.

The algebra of elevation gain, slope exposure, slope angle, and time of day constantly recalculated the snow’s consistency. A thousand feet higher the ice armor was breaking. Sometimes we sank ankle deep in the underlying granular crystals, sometimes groin deep.  As I struggled to extract myself from one submersion, Tom took the lead. Using his hands to support half his weight, he moved quickly upward through this bear-walk snow.

Half an hour later, even four-footed movement was ineffective on the steep, south-facing slopes. Skis moved from back to foot and we moved efficiently again through an increasingly unconsolidated granular snow. At about 5,200 feet the approach to Rock Mountain dials back and, as we snaked up ridges and bowls leading to the summit, we encountered cardboard-crusted powder, talcum powder, toe-high hoarfrost, Styrofoam windslab, dust on crust, white sandstone, chip-seal ice, and gray ice.

The views atop Rock Mountain were mighty with Stuart, Daniel, Hinman, Glacier, Sloan,  Monte Cristo, Whitehorse, Maude and hundreds of other teeth highlighted against a blue horizon. In simplest terms you could call it a skyline of black and white peaks. But that would understate the complexity of the slates, schist, granites, and gneisses constituting the blacks. It would equally discredit the funky mingling of water, ice, and air composing all that white. Off the back side of Rock Mountain, we expected north-facing powder but we slid across hollow-sounding drum snow that allowed fast skis to float yet ruptured beneath turns. We worked slowly down then traversed under Patagonian-styled, rime-plastered peaklets sporting snow-fluted ridges. We moved through a col onto east-facing slopes draining into Crescent Lake. Immediately the snow altered states from wind hardened slabs to boot-top powder. It was so seductive my companions linked turns drunkenly, forgetting the importance of capturing a few envy-producing pictures to rub in the nose of family and friends.

On the day went like this. As a result of planning we skied upward through all manners of south- and west-facing cruds, cements, and crusts. And through luck (or perhaps the will of Fate wanting our envy-producing pictures to draw others to this elemental world), we descended north- and east-facing slopes that were primarily powdered with soft snow.

Fate fancied us until the final descent from Merritt Lake back to Highway 2. Here the fall line wrapped around onto south-facing slopes. It appeared we were an hour too late – in the open glades what would have sported creamed-corn earlier, a pie crust of ice skinned the surface. In thicker forests the snow bombs that had warmed and plummeted off tree branches had pitted the snowpack and frozen. Here our skis chattered wildly over corrugated sheet metal.

We sideslipped, snowplowed, and hopped turns until we dropped below the freezing level. Suddenly the snow was like whipped potatoes – thick but smooth. Ahhh. A series of easy turns dropped us onto the 1.5-mile road leading to the highway. The road, facing the vacuum of space had  seemingly given its heat back to the black void. On a frozen white ribbon we rocketed back to the highway. And with the last rays of light leaking from the sky, we stepped off this steely snow onto spongy tarmac.

Skill. 3 (advanced) for skiers and hikers.  1 + (advanced beginner) if rated for its technical climbing difficulty for summer mountaineering. Fitness. 3 (advanced). Whether doing this in summer or winter, it’s a long day trip.

Access. Drive 26 miles west of Leavenworth on Highway 2 and park at milepost 73.2 on the north side of highway just before the snowed-over road leading to the Rock Mountain Trailhead. The highway’s shoulder is plowed extra wide here and, as of 2010,  fair-weather parking is allowed here. However, if you don’t want your Subaru turned to scraparu, avoid parking here when plowing or snow blowing is taking place (i.e., during or after a snowstorm). For the shuttle, leave a car on the shoulder of Highway 2 at the turnoff for the dirt road leading to the Merritt Lake Trailhead (milepost 76.1), or plan to hitch or run the 3 miles. The same warning applies about parking here – it’s a fair weather place to park and should be avoided when plowing is taking place.

Hazards. There’s plenty of avalanche hazard along this route–in the wrong snow conditions you might find yourself drowning in snow. Literally. It’s up to you to decide when the route is sane or stupid. The peaks and ridges along this route also build some impressive (and dangerous) cornices. Old farts would recommend staying off them … and minimizing the time spent traversing under them.

Trip Description.  While parts of this traverse generally overlap the trail leading to Rock Mountain on the ascent and the trail dropping from Merritt Lake on the descent, the route becomes cross-country travel once the trails are snow-covered. Use the bearings on our maps and an altimeter to keep yourself on track. Most of the route is straightforward if you pay close attention to the bearings and the elevation. There are two spots where a little beta is helpful:

Direction of travel. Doing the route in a clockwise direction would be the general recommendation–this will keep you climbing south-facing slopes and descending north-facing ones. There will be some snow-weather cycles when the south-facing slopes will be warming nicely for good corn skiing and you’ll be better-off doing the route in a counter-clockwise direction. More Info: Our skiing-backcountry guidebook has additional entries with additional details about skiing Rock Mountain and Mt. Mastiff as sole destinations rather than as part of a traverse.. 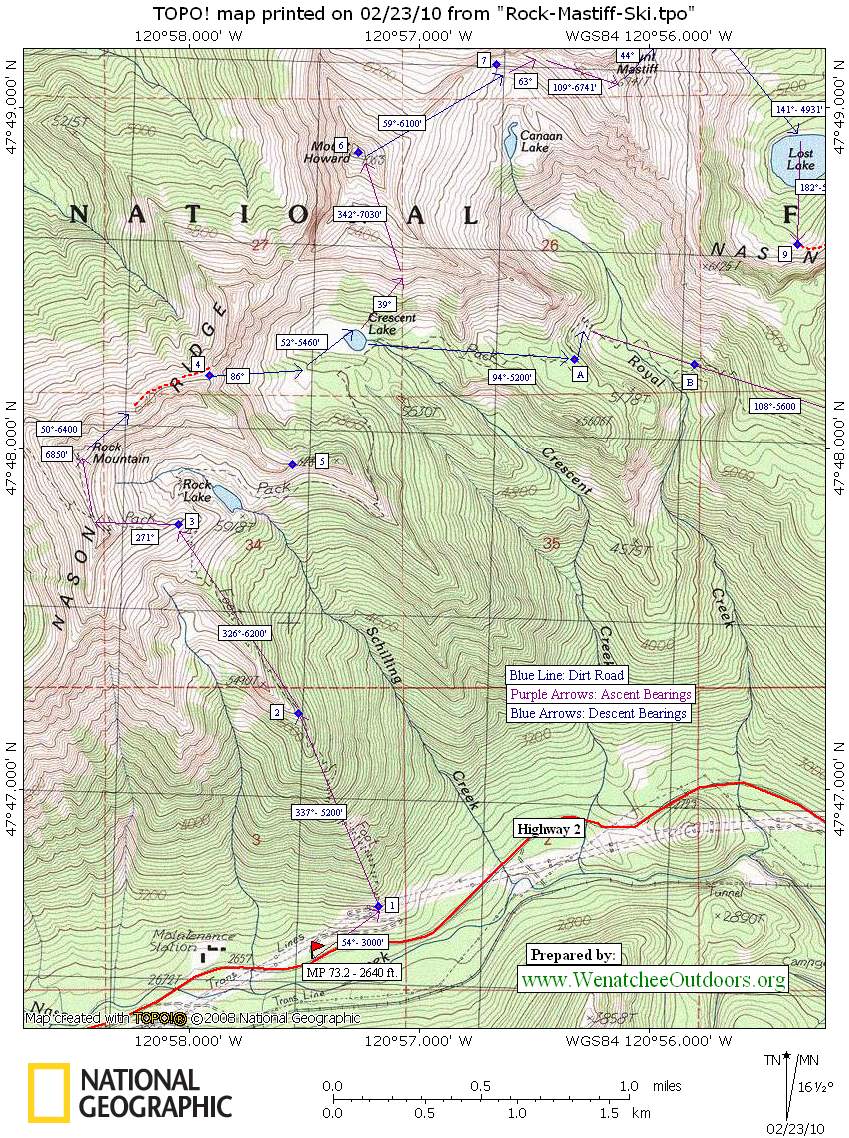 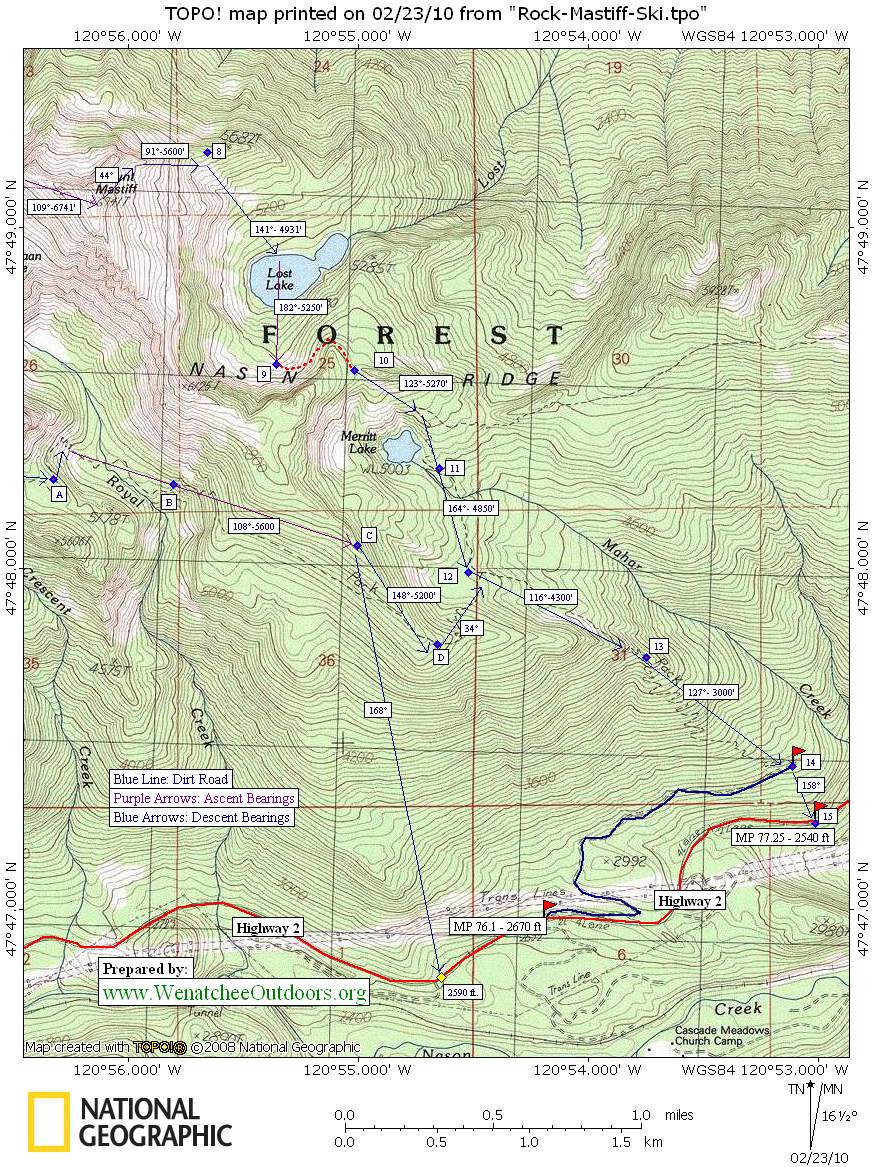