Attractions: A short winter backcountry ski tour or snowshoe trip to be taken right from the edge of Wenatchee in the Dry Gulch/Asamera area. For Wenatchee residents, this is an inspiring early-morning outing to put you in a good mood before work, or a nice way to unwind after a hectic work day. Take along a headlamp and you won’t be concerned about starting or ending the outing in the dark. From the little peak reached on this outing, you have beautiful views down on the lights of Wenatchee and the snaking folds of the Columbia River. The view over at Saddle Rock is also not half bad.

Distance: Round-trip distance of about 3.5 miles

Use ‘Print Preview’ before printing to check your page setup and to properly scale this map to a full sheet of paper.

Recommended Season: Dead of winter.Some winters the low-snow around Wenatchee is never deep enough to ski this route—either the snow is too thin or doesn’t have enough structure (resistance) to keep you from scraping the ground all the way down. On such winters this is a snowshoe-only route. Even on a good ‘ski’ year, you’ll probably hit some rocks –especially up near the top where the ridge is more wind blown.

Access: Drive south on Miller Street until it takes a sharp, right-hand bend and becomes Circle Street. Follow Circle about .3 miles until its end and park in the small pullout. Don’t block the gated road leading into the old Asamera Mine area. Trip Instructions: –From the parking area (elevation 1,060 feet), climb over the gate blocking the road into the old mine. –Follow the main gravel road for .3 miles, which will be snowed over if there’s enough snow to ski or snowshoe. –Shortly after a gate beside the main gravel road, veer left off the road and climb cross-country in a southerly direction up the slopes and ridge leading to a little peaklet (elevation of 2,115 feet). –Descend the way you came. If you’re, skiing be mindful that the upper part of the ridge is likely to be windblown and will have an even thinner snowpack. You’re likely to hit some rocks along the upper ridge. The skiing gets better as you descend because the north-facing slopes down low aren’t as wind affected and because the slopes are grassier down low.

Cons / Hazards: Thin snowpack and rocks. This is no problem on snowshoes, but you need to be a little mad to ski this because the snow is rarely deep enough to eliminate all worries of grounding out. If you’re crazy, however, ski slow, ski under control, and use old skis. In case your skis stop on a rock and you don’t, a helmet isn’t a bad idea.

IMPORTANT DISCLAIMER: Treat this information as recommendations, not gospel. Things change and those contributing these reports are volunteers–they may make mistakes, fail to give complete information, or may not know all the issues affecting a route. So forget about finger pointing: If things go wrong, you are completely responsible for yourself and your actions. If you can’t live with that, you are prohibited from using our information. 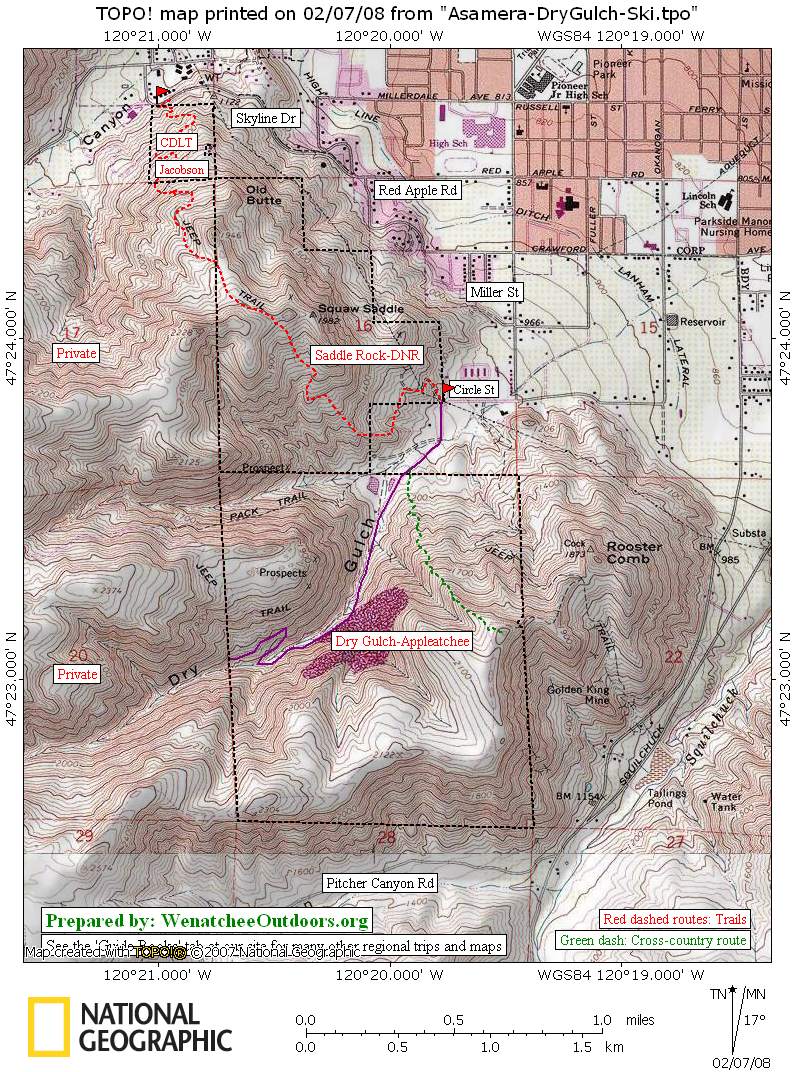