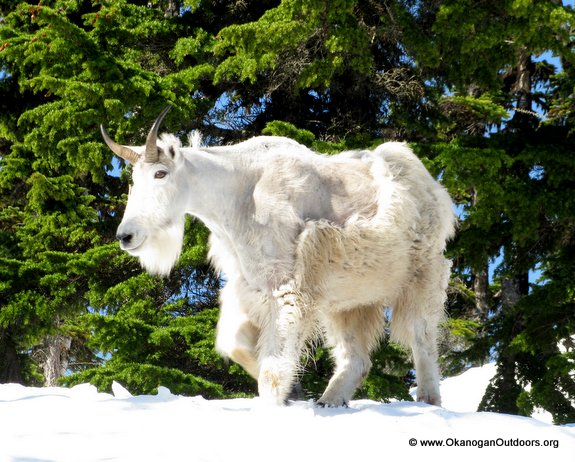 “Move really slowly, you guys. I don’t want you to scare the goat.” Jake had seen the approaching mountain goat first and he was excited about the photo op to come.

“I don’t think we need to worry about scaring him ,” I said, “There’s so much summer traffic here, they’re used to people.”

In other popular haunts around the Cascades and Olympics, goats sometimes stare at you, looking for that moment when you drop your fly. When they see you urinating, they move in fast trying to capture your salt as it flows from your faucet.

In this case, the goat watched us from fifty feet for a minute. Our cameras were clicking and we could see it was not afraid. We moved around trying to capture our model with ever-better backgrounds. Still no fear.

Suddenly its mood changed and it walked toward us. At first it seemed more curious than aggressive. When it started butting its head against a small tree and hooking its horns at us, however, there was fear… on our part. Its black horns looked needle sharp at the points. I put the camera away, slowly backed up, and picked up a snow shovel that I could slam into its face if necessary. Jake and his father picked up ski poles to use as lances, and we stood side-by-side giving the goat a large wall of weaponry to contemplate. 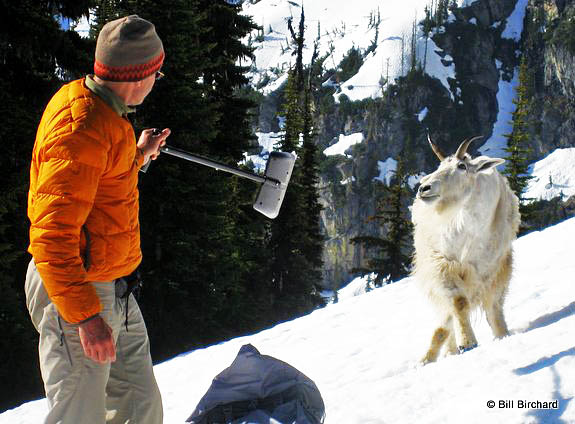 It didn’t like those odds and retreated for a time. Then it seemed to decide it didn’t like being submissive, so back at us it came. Again it approached, repeating its tree butts and horn swipes. On our next assault we clanked poles, yelled, and aggressively attacked with snowballs flying. This time the goat got the message and left for good.

Goat-human interactions are escalating in various places around North Central Washington but some of those interactions are even worse in Olympic National Park. At Hurricane Ridge and Mt. Ellinor, people have been gored by aggressive goats. There was even a death caused by a goring in 2010.

In this incident a large billy gored a day hiker on Klahane Ridge (Hurricane Ridge area). The goat had followed a party of three for about a mile and eventually gored the single member of the party who had sent the other two hikers ahead for greater safety. In truth experts believe parties are safer against assertive or aggressive goats if all members of a party stick close together – greater numbers of people and the perception of making yourself look bigger seem to deter charges. In the case of this fatal incident, the goat eventually charged the lone hiker, gored him in the thigh above the knee, and struck a major artery. The victim bled to death.

Such incidents are rare and the goat involved in this incident was hunted and killed. Nonetheless, goats are becoming increasingly habituated to people in places like the Enchantments, Stuart Range, Ingalls Lake, Spider Gap, Rainy Pass, Maple Pass, the Liberty Bell area, and more. We all need to take steps to prevent goats from becoming habituated to humans. We also need to discourage goats that have become habituated. Here are some recommendations:

Humans should also understand that all of the following constitute aggressive goat behavior: