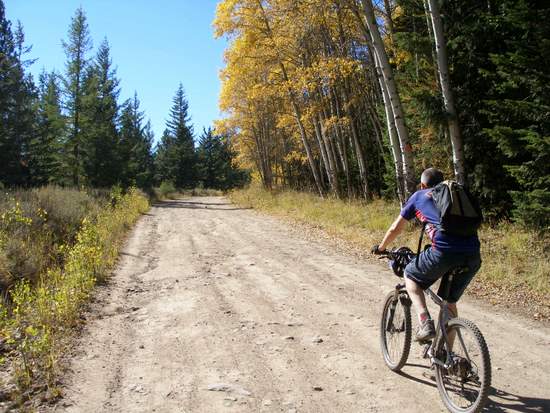 Ray Birks pedals up Jumpoff Ridge during the Battle of the Bikes.

When it gets right down to it, all that’s really needed to make a race great are a starting point, a finish line and participants motivated to get from one to the other. You don’t need to give away swag bags or pint glasses, offer computerized chip timing or an age-group podium ceremony, or even to ask participants to fork over their credit number including the three-digit CID code on the back. Heck, you don’t really even need a racecourse.

Just a start. A finish. And that’s it.

Such was the case earlier this month when 40 folks of the two-wheeled persuasion took part in Battle of the Bikes, a free and informal, largely word-of-mouth race starting in Wenatchee and finishing in Ellensburg.

It was a choose-your-weapon (mountain bike, road bike or cyclocross bike), choose-your-own-race route affair. While roadies opted for the Highway 2 to 97 up-and-over-Blewett Pass route, those of the knobby-and fat-tire persuasion climbed up Mission or Naneum ridges, then dropped down the south side toward Ellensburg via a variety of trails and rough forest roads.

“Wenatchee has all these different bike cultures — roadies and triathletes and mountain bikers and cyclocross guys — and we thought it would be really cool to bring them all together in one event,” says Andy Dappen, who, along with mountain biking the Jumpoff Ridge down to Coleman Creek Road route, co-organized the event with Wenatchee physical therapist Michael Hansen. (Dappen is also the content editor of www.WenatcheeOutdoors.org, a Central Washington outdoor-recreation website.)

“Everyone was intrigued by which route was the fastest, too.”

Because the race offered no aid stations, one of the few requirements (OK, suggestions) was that participants ride and stay together with at least one teammate should mechanical or physical issues arise.

“The appeal for me was that I was doing it with a fun group of riders who knew how to push it, but who also made just having fun the real priority,” says Wenatchee’s Alison Haug, whose team of four mountain bikers, dubbed Alison’s Chains, finished third.

“It was really an adventure in the truest sense; we were completely unsupported and had to rely on each other.”

Which route proved fastest? Well, the first rider to make it through the doors of The Tav, the Ellensburg watering hole that served as the finish line, was Seattle’s Brig Seidl. Pedaling a road bike (actually, a time-trial bike), he completed the 74-mile Highway 2 and 97 route in exactly four hours.

“Fortunately for me, Tyler Farrar [a professional cyclist who grew up in Wenatchee] was at the World Championships in Australia that day!”

“It’d be interesting to put the same guy on different routes,” Dappen says. “Maybe next year we’ll require that riders ride a different route. But really, I’m more interested in it just being a fun outing as opposed to a competition.”

Keep an eye out for next year’s Battle of the Bikes, which will likely be held at the end of September or beginning of October.

The article describes two other stupid fun outings in other parts of the state. Finish reading the complete the article.

The enthusiasm of the 40 people who participated in The Battle of the Bikes leads us to believe locals like the idea of informal, grassroots, free outings that bring together different groups of muscle-powered outdoor recreationalists. Here are some snow-related ideas that might be interesting to explore for the coming spring. What do you think about these? Got any related ideas/routes that would bring together girls and boys with different toys? Leave your feedback or new ideas as a comment.

1) Battle of the Boards. Shortly after the ski area closes do a round-trip skiing, snowboarding, Nordic skiing, snowshoeing, (even trail running) outing from the bottom of the Mission Ridge to the top and back down again. Race a friend of similar fitness who’s using different gear.

2) Battle of the Thighs. Ski/Snowboard all the named runs and named bowls at Mission Ridge (the circuit must also incorporate one top-to-bottom ascent of the mountain).

3) Snow-2-Snow. Ski, snowboard, Nordic Ski, or snowshoe from snowline (somewhere near Mission Ridge) to snowline on the opposite (Ellensburg) … and back again. Again the notion would be to have a friend of similar fitness (but on different gear) that you pit yourself against.