(See a pdf version of this story with more photos) 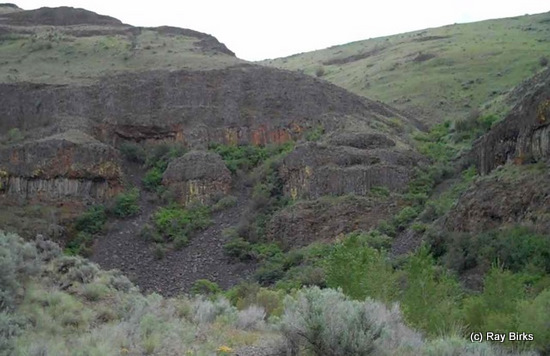 A typical view of the canyon carved by Douglas Creek.

I knew when I sent out the email to my riding buddies that I’d better label this an ‘adventure’ in order to cover my tracks if things turned out to be, well, adventurous rather than buffed-out single-track. Three hearty souls from the handful I invited trusted me just enough to join up for a trip I had been scouting for a few months. The goal was to ride from Alstown, southeast of Waterville, down the old railroad grade paralleling Douglas Creek and end up at the southern trailhead where gravel roads would return us to our vehicle at Alstown.

The vision for this trip came when I was riding my road bike with a friend out in the Palisades. As we passed the roads that led to Douglas Creek, I commented there used to be an old railway line, carrying both wheat and passengers, that ran up all the way to Waterville. We both thought it would be a great place to explore.

Back home, I called upon the greatest resource at my disposal, Google, and easily came up with topos, history, pictures, and one intriguing trip report from a rider in Seattle. He had ridden from Waterville to Palisades and, after reading his account, I knew this was going to gnaw at me until I completed it. In his very detailed report (with great pictures), he said he had ridden down Slack Canyon Road, meeting up with the railroad grade, and had eventually spilled out onto Palisades Road. I knew it would be even better to skip riding down Slack Canyon Road and tackle the railroad grade from the very top.

So the email went out and four of us decided to use Memorial Day to find a slice of adventure amongst the creek’s basalt columns, beaver ponds, and abandoned rail lines. Come Memorial Day, we loaded a van in Wenatchee with four bikes (one hard tail 29-er and three 26” hard tails). An hour later we were sitting at the old abandoned grain elevator in Alstown, which one of my colleagues claimed was named for a guy who used to live there named Al. (Note: Research revealed he was mostly right — Albert Luther Rogers lived in Waterville and was a civil engineer and civil leader and the town was named after him.) 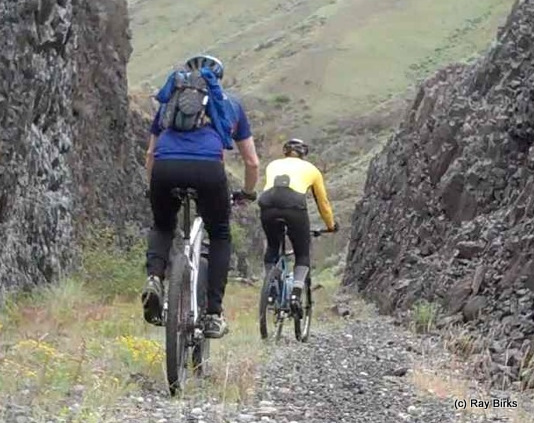 In our trip itinerary, I had jokingly given us five minutes to find the trail. I had tried to scout where we would start the ride by hauling my two-year-old daughter from Wenatchee, up and over Badger Mountain, and on the straight-as-an-arrow roads lining the wheat fields until we encountered Alstown. Once there, however, our overriding urge to throw rocks into Douglas Creek trumped my actual intent of finding the start of the ride.

I knew from my research, looking at maps, and talking this over with whomever would listen that we were in for about 3 hours of riding on a 3-percent grade. Once we got some eight or nine miles down the creek we would intersect H Road (aka Slack Canyon Road) which we would ride uphill to Road #3 and that would lead us back to the beginning. But before doing all that we had to find the trail.

We started off and, very quickly, were following a double-track road flanking the right side of the creek that ended up in a wheat field rising up above the creek. We surmised that within a few minutes of the start we were already off-course, so we backtracked, scouted a bit, and spotted a gravelly path making its way down the canyon on the opposite side of the creek bed. Excitement grew as we 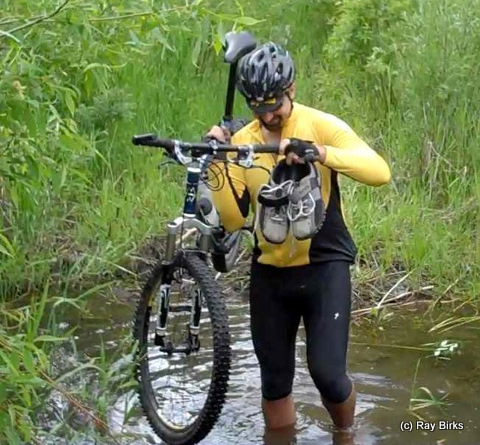 wondered what the trail would be like. Smooth?  Rocky?  Rideable?  Overgrown?

What we experienced in the first 1.5 miles was a hard-to-follow trail of overgrown brush that drew catcalls from my friends, who were suddenly not so hearty.

“Is there anything else around here that might be worth riding?”

“No,” was the easy and honest response.

“Can we ride real roads and at least get some exercise?”

“No,” was the somewhat annoyed response.

The farther we dipped down the canyon, the more committed we were and the better things became. We soon learned the trick of spotting where the trail would eventually go when it petered out or we encountered one of the many missing trestles that were either washed out or taken down when the railroad was abandoned in 1985. Wikipedia notes that there were 49 trestles on this line, the most of any branch line in the United States. Sometimes we hiked with our bikes down shallow ravines. Other times we rode through tall grass hoping not to hit chuckholes or large rocks. For the most part, it was reasonable riding on a gently sloping railroad grade littered with basalt rock and railroad gravel.

We exchanged leads as different members of the party stopped to admire the sights, fiddle with gear, circumvent bull snakes, enjoy wildlife, or examine the railroad’s blasting work. Typical of Eastern Washington, there was not another soul in sight but, atypically, the weather was muggy and occasionally spit on us. 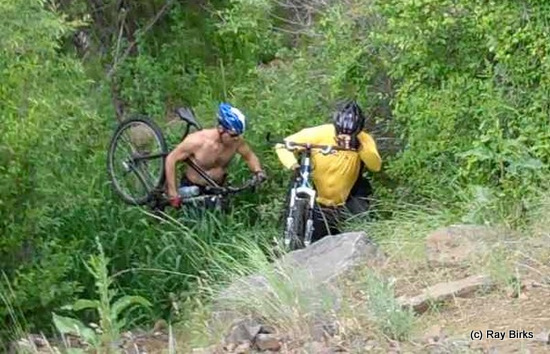 ‘This is supposed to be Eastern Washington…what gives with all the brush?’

After about 7.5 miles, Douglas Creek merges with Duffy Creek and heads east. Here the beavers had been at work and the creek had backed up and was getting deeper. From a previous trip report I had gotten the idea to bring my Tevas to accommodate some deeper creek crossings.

While we only had one serious crossing, I was glad to have sandals along. We decleated, Teva-ed up, and carried the bikes across one stretch of thigh-high water of unknown composition. Jokes of fertilizer runoff and cow dung led to a hearty $1,000 cash offer to anyone in the party capable of riding this soggy stretch. No one even tried.

One of our team members rode a little ways up Duffy Creek to see if there was a better crossing and came across an old homestead built into the canyon wall. He also encountered our only rattlesnake of the day. We were amazed at the number of birds we heard and birds of prey we saw as we made our way down the canyon. If I were a birder, this would be a slice of heaven.

During the last 1.5 miles, we started to see some of the trail work completed a few years earlier by the BLM. We saw blank signs that were beckoning for some information, a somewhat randomly-placed bench, and evidence that the trail had been marked with a handful of “Trail” signs. Finally we rolled past the gate and the reader board marking the southern terminus of our adventure and 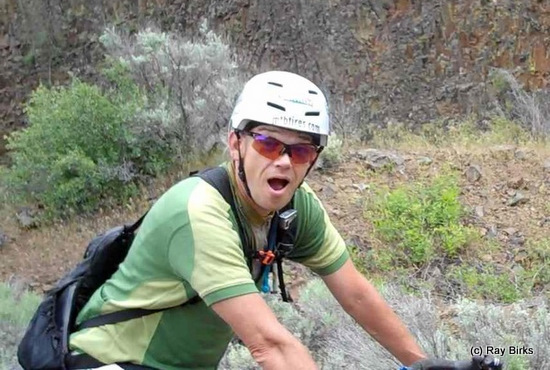 the point where our trail met Slack Canyon Road.

In an earlier adventure, my wife and I had ridden our mountain bikes from Palisades (to the southeast) up Douglas Creek to within a mile of this junction. That was a beautiful ride along a portion of the creek where there are some deep pools and waterfalls. That route is outlined in the WenatcheeOutdoors guidebook and is a fairly mellow ride with a better road to follow. There were quite a few creek crossings on the lower portion of the creek, but we were able to ride these crossings without  much trouble.

On this trip bordering the upper portion of the creek, our mileage from the van at Alstown to Slack Canyon Road was 8.99 and required a little bit more than three hours to ride. Slack Canyon Road was easy to find and easy to ride. We rode it uphill and after about fifteen minutes found ourselves on the Waterville Plateau staring at mile after mile of wheat fields and roads so straight you felt like the countryside had been created with a large T-square.

Off in the distance an approaching storm threatened to drench us but the mugginess still was our companion. Eventually a small shower overtook us and soaked us just enough to keep us cool. The glasses fogged up and sweat rolled into our eyes, but the conversation about the beauty of the plateau kept our minds off the discomfort.

After about five miles, we took a left on Road #3, passed a lonely truck and a combine, and headed north for about three miles on the last leg of our journey. The riding was easy now and soon we were winding down a small hill, passing a few houses, (some abandoned, a few inhabited), and looking for our trusty van beside the familiar grain elevator. The total mileage was a touch over 17 miles, our total time a few minutes over four hours.

Later when a friend who couldn’t join us asked what I thought of the ride, I told him it wasn’t sweet single track, but was a great adventure. Would I do it again, he wanted know. That’s a thorny question — in a few senses of the expression, this was a “once-in-a-lifetime” ride.

Click here for pdf version of this story with more pictures.

WenatcheeOutdoors guidebook information about this route.

Owen Kehoe’s blog (the trip report the author refers to in this story).

See a topo map this route.