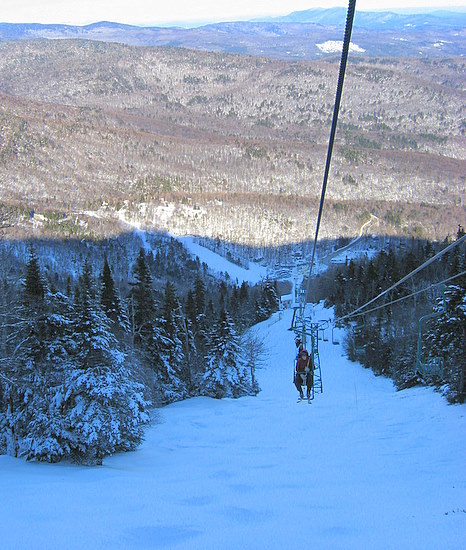 East vs. West. Do you want to attend college where ‘skiing’ is a euphemism for accessing fields of ice with single chairs?

Two years ago, at the beginning of my senior year of high school, I was forced to abandon my non-committal attitude about the future and consider colleges. After weeks of perusing giant college guides and listings, I narrowed down the list of possibilities based on a few factors that were absolutely non-negotiable: I wanted a small school with a curriculum that was academically rigorous, a small town, an international outlook…and I needed to be able to ski.

I found my requirements filled by a small school in rural Vermont that owned a small ski area only minutes away. When I told people about my choice, the common response (beyond expressing curiosity that I hated my parents so much that I needed to travel to the other side of the country) was the comment, “Well, the skiing will certainly be different.” Feeling defensive about my future school, I armed myself with what became a standard rebuttal: “Perhaps, but the snow in Vermont is much better than the rest of New England.”

Two years later, while I am thrilled with my school and I appreciate the proximity and cheap rates of the nearby ski hill, I have emerged a bit wiser about good snow and where it can be found.

To be fair, the fresh snow we get in Vermont is beautiful: light, dry, fluffy powder, with a winter that lasts from late November to late March. That’s a long ski season. However, getting snow can be a problem. Through the depths of winter, the temperatures are often so low that it is simply too cold to snow. These periods of minus-15-degree weather are broken by intermittent days where temperatures rocket to 50 degrees.

The entire state turns into an enormous puddle. Then, two days later, it is re-frozen with the return of subzero temperatures. Parking lots become granny death traps, walking to class is a continuous battle with gravity, and ski hills turn into frozen waterfalls. I had no idea that, when people discussed the East-Coast ice, they weren’t referring to the scraped, hardpack I associated with the term. They meant ice–an impenetrable, blue material worthy of any rink.

At first, I was optimistic about the new conditions—it would be a good learning experience to ski this kind of snow (or lack of snow). The optimism lasted about half a run. As my edges desperately tried to bite into the rock-hard surface, chills shot up my spine. By the end of my first run, I’d had enough of this “learning” business. My poor little light touring skis were never meant for these conditions.  Soon I adopted a new tactic: denial. If I skied on the outer-most three feet of the runs, I could usually make my turns in the shavings that other skiers had pushed aside and could pretend that I was back in the Cascades skiing West Coast ice. The only drawback to my brilliant plan was the occasional instance where a longer turn would send me skidding out onto the blue glaze. Terrified, I would flail for balance. After skidding to a halt, I would wait for my heart rate to drop, marveling that I was still standing.

My introduction to Eastern skiing also came during a bad snow year in Vermont. The ski areas desperately poured man-made snow onto their runs, but Mother Nature wasn’t doing her part. For months I sat at school enjoying the freezing, snow-free weather and glowering as Weather.com showed snow storms pummeling the West. Finally, our little hill, the Snow Bowl, was able to open a run on its beginner lift. The chair takes about five minutes to ride up; the descent takes about a minute and a half. It took one run down the beginner slope to be thoroughly bored. I was used to Mission Ridge and Stevens Pass, where we could ski all day without hitting the same run twice. Nevertheless, I continued visiting the area. I had bought a season pass and, by God, I would get my money’s worth.

Ski trips to the one run at the Snow Bowl became a test of creativity. Skiing backwards gave me a crink in the neck and earned dirty looks from parents shielding their two-foot children, so I switched to skiing on one ski. Over that season, I became a proficient skier on my left ski. I saved working on the right ski so that I would have something to focus on the following year. 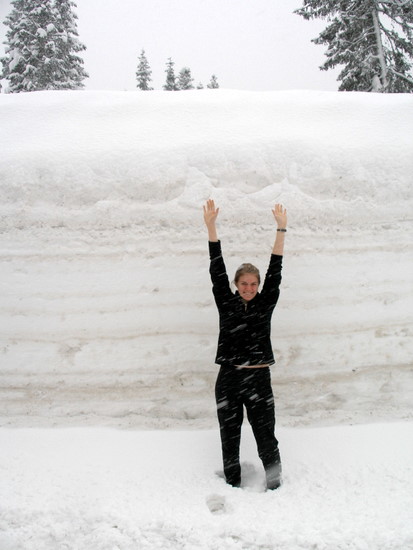 Or do you want to be close to a college that has real snow? The snowbanks en route to Stevens Pass.

Finally, on Valentine’s Day last February, we were hit with three feet of snow. Classes were cancelled the next day and I headed up to the Snow Bowl with a few friends, excited for the opportunity to finally ski good snow. For the first time all year, the whole area was open, including the two moguls runs. I zipped down the first pitch and stopped, looking for my friends who so often left me in the dust on icy days. I found the two of them uphill of me, one picking herself up from a face-plant, and the other digging for his two skis in the powder above him. They had no idea how to ski powder. I wasn’t above feeling vindictive triumph at their troubles, but I managed to restrain myself from gloating until I was on the phone with my parents that night.

Tagging along after my father has given me a deep love of tree skiing. At Mission Ridge, we have learned the off-piste routes so well that we can spend the entire day at the mountain and barely touch the groomers. When we visit Steven’s Pass, there is a bit more exploring involved (and hiking, when things go wrong). However, at both areas it is the same: Groomed runs are only for accessing the more interesting terrain.

When I visited Mad River Glen, another ski area located about 45 minutes from my school, I was told that it was famous for its off-piste skiing. This telemarking hub has a unique, edgy attitude with strict rules against snowboarders and snow-making. In the days of high-speed quads and sextets, I can’t think of many ski areas that would replace their single-chair (the only one in the country) with a newer, sleeker, refurbished single chair.

During last year’s winter of low snow, skiing at a hill that doesn’t make snow and only has limited grooming was interesting. Mad River has steeper slopes and has no qualms about letting you go wherever you want, marking almost-bare runs with “thin coverage” signs. The first run found me skiing down moguls of ice, trying to avoid the tufts of grass and the patches of dirt leaping out from under the bumps. A short dip into the famous trees revealed that there was more granite than snow on this mountain. I have since been informed that I am a jinx for this hill because the days I visit are always pure ice.

Skiing back East has given me a true appreciation for how spoiled we are in the Wenatchee Valley. From our light powder to our Cascade cement, any variety of snow that isn’t blue and that you can actually stick a pole into works for me. Coming back home for Spring Break last year, I was treated to fresh powder at Stevens Pass, even at the end of March. This year, I was back at the beginning of February for our winter break, and had equally beautiful powder at both Mission Ridge and Stevens Pass. Turning through the silk snow and feeling it brush my knees reminded me of why I am addicted to skiing. By the end of these days, my legs would be so exhausted I could barely control my skis, but I wouldn’t want to stop. 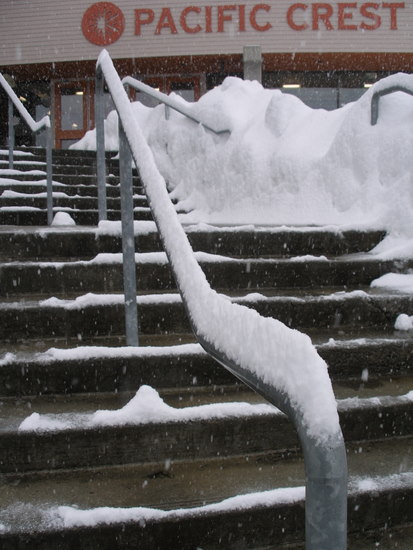 Compared to famous destination resorts, I used to think of Mission Ridge and Stevens Pass as little hills (1,000 and 1,125 acres respectively). But after two months of skiing one run in Vermont, I truly appreciate the variety of terrain that our ‘little’ hills offer. From the rolling groomers, to open bowls, to tight tree skiing, to moguls, to hike-to backcountry runs, Stevens and Mission offer skiers many more diversions than simply trying to see how fast you can descend an inclined ice rink.


Here in the West, you can ski more aggressively and tackle much steeper terrain without the fear of slipping off the mountain. And it’s nice to know that, if you do fall, the crash will only create puffs of snow rather than shards of bone. The prospect of getting overly friendly with the Vermont’s slopes is not a warming one.

In the end, it’s comforting to know that, if I am going to spend my parent’s retirement fund on an expensive school, at least I will have learned a thing or two. For example: In only two short years I have discovered that it might be worth living in the same region as my parents (same state might be pushing it), if it means that I can ski on both legs. However, college has also taught me that life is more than black and white. Before I commit myself to returning to the Northwest, I have more places to check out: I’ve heard that the Andes have some decent skiing.