by Matthew Tangeman and Andy Dappen

Late summer has rolled around once again – the days are still long, but as autumn approaches temperatures will slowly begin to fall from their triple-digit peak, making it prime time to savor some epic-caliber adventures in the mountains. Mountain bikers often dream of days like these, where they can log huge descents over seemingly endless singletrack. It doesn’t take long to look over a 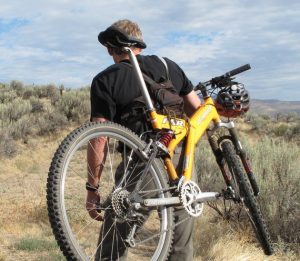 few maps and see many potential rides in the vicinity of the Wenatchee Valley that fit that bill perfectly – such as the Icicle Ridge Traverse, complete with a glorious alpine descent dropping over a vertical mile right down to Leavenworth.

Now any mountain bike ride with such muscular statistics as a 5,600-foot vertical descent sounds irresistibly appealing until you consider that to make the big drop you must ascend a vertical mile first. And because the climb up the Fourth of July Trail, like many trails providing access to great descents, is too steep and irregular to pedal, you’ll have to hike-a-bike.

Carry or push a bike over a vertical mile upward? Oy vey!  You’ve just erased this adventure from the to-do list and left it for another breed of masochist. But wait! Just as backcountry skiers and mountaineers carry heavy loads into the mountains for their respective adventures, there’s a solution to this mountain biking dilemma that involves a good day pack rather than pushing a bike forever or punishing your shoulders and  neck beneath a bike’s uncomfortable metal frame.

A quick glance at a standard mountain bike and a top loading day pack doesn’t reveal an obvious method for the two to become one, but these items are not so incompatible as you might think. A surprisingly simple method involving several 2-foot straps (or several 2-foot lengths of parachute cord) can have you hauling your bike Sherpa-style in no time.

In the ideal world what you need are several Arno straps (three that are 2-feet long, one that is 1-foot long) and three or four 16-inch lengths of parachute cord. In the less ideal world of reality, you 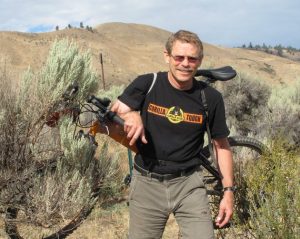 can use some two-foot lengths of parachute cord instead of the Arno straps. Cord does the job, it just tougher to cinch everything tight and to untie tight knots.

We’ve carried bikes frequently by balancing the bike horizontally across the pack and attaching the frame to two or three tie points situated high on the pack. This system (the horizontal rack) entails no disassembly of the bike and works fine when you want to quickly switch from riding to carrying to get up a moderately long ascent that is quite open. The obvious snafu? The moose rack on your back, which is nearly 6-feet wide, snags in bushes and trees if the vegetation is thick. Nonetheless, determining where to quickly lash your bike to your pack for this kind of carry is worth figuring out because you can switch between ride and carry modes or vice versa in two minutes. Seriously.

Photos: The horizontal rack is quick and straightforward, but presents obvious issues when moving through brush. Note: The bike pack in the picture above is black and blends into the black shirt (we hire only the best photographers) but the bike is tied onto that black pack high on the left and right sides.

The vertical stack is a better system for a long carry like the climb up the Fourth of July Trail, heavily forested trails, or for cross-country travel through vegetation where the bike will snag. The vertical stack removes the tires from the frame, balances the center of gravity of the frame, longitudinally, with the center of the pack, and then lashes the tires in a Figure-8 position to the frame. 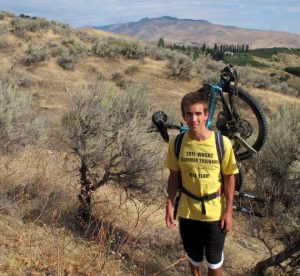 To figure out how your bike and your pack will meld together and balance nicely will require about a half-hour the first time around. Once you’ve 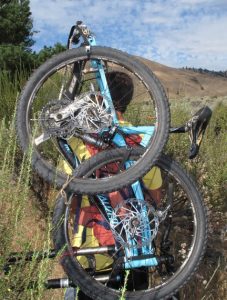 figured out your system, know your lash points, have your straps or cord pre-cut, it takes five minutes to switch between rolling and carrying. That’s not much different than the time skiers spend skinning or de-skinning skis while touring.

Photos: The game-changing vertical stack. It will earn you odd looks on the uphill… and looks of envy once gravity is rolling you downhill.


Here are some general pointers for the vertical stack – you’ll need to work out the fine
points of marrying your bike to your pack.

Photo: A close-up look at the vertical stack. It’s not an eye-pleaser, but it works.

Once you’ve got this carry system worked out, long climbs that once seemed heinous will suddenly seem doable. Don’t get us wrong, it still requires plenty of sweat to get the bike up high, but the bike is a completely different beast when it’s balanced comfortably on your back rather than biting your neck.