“Have you heard about ‘Fun-Factor Ratings’?” he asks.It’s 7 a.m. and Mike Rolfs and I have just started the 7,000 vertical foot climb up the south side of Mt. Adams, Washington’s second highest peak. Mike is casting out the bait of interesting topics in hopes of hooking me into a long conversation – nothing helps the miles (and the vertical) pass like the distraction of a good talk. 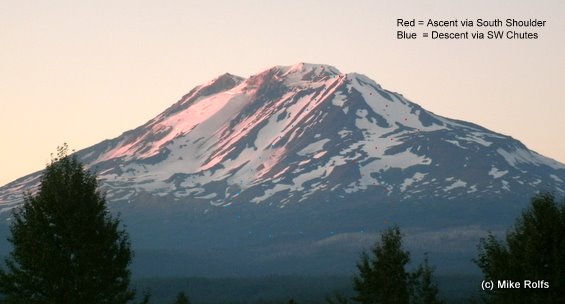 “No.” I tell him bluntly, saving breath for the work ahead.Mike describes a rating system he read about at an outdoor forum.  Fun-Factor 1, he says, is fun enjoyed while actually doing the activity—like powder skiing. Fun-Factor 2 is fun enjoyed after the fact when you think back on it –like the fun from the sweat and fears of an alpine climb. And Fun-Factor 3 is something that’s simply not fun, even when looking back on it.

“So what about now?” I ask, breathing a little heavier from the uphill effort, “Fun factor 1 or 2?”
We’re approaching timberline with the stands of hemlocks thinning into alpine meadows that yield commanding views of the volcano before us as well as Mt. Hood, the volcano behind us. Lupines, asters, arnicas, buckwheats, and a bouquet of flowers I can’t identify are flaming in the light of an orange ball hanging inches above the horizon.

Definitely Fun-Factor 1,” Mike says as he takes all of it in. “And for you?”
“The scenery and the setting is a 1 but the work of the uphill is more fun once it’s over. So the total experience is a 1+ or a 2-,” I tell him, falling into my annoying habit of splitting hairs. “This system also needs a way to rate anticipated fun. Under this scale that would need to be a Fun-Factor 0.” 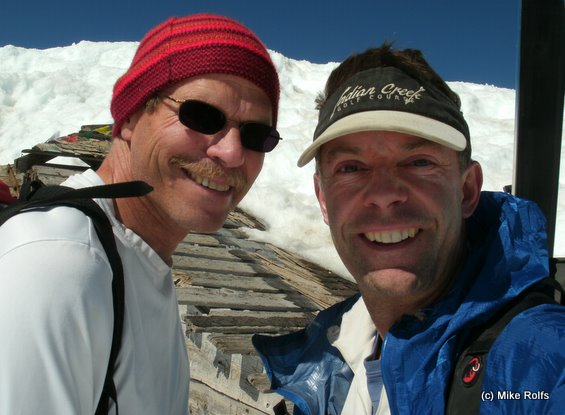 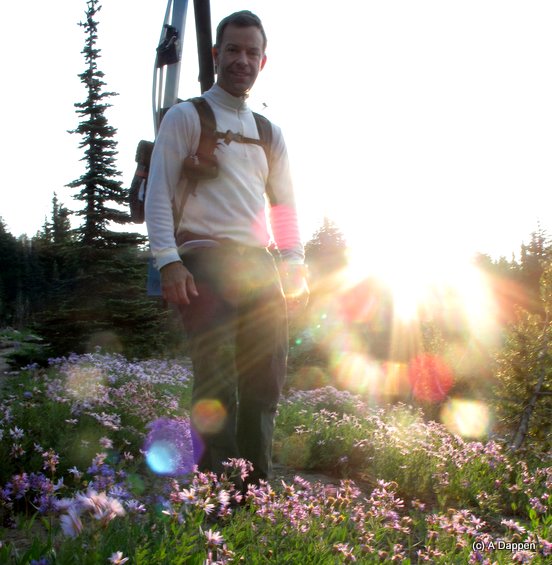 I tell Mike how much fun I’ve had anticipating skiing Adams over the past week. The latest I’ve skied the peak in the past has been mid-August. The anticipation of skiing it three weeks later in September, for unexplainable reasons, has brought much anticipated enjoyment.
Later, at the 9,500-foot level, we stop to strap-on crampons. The snow slopes before are steepening and, while we tend to our spikes, a lone person performing a sitting glissade slides past 20 yards away. We try to engage him in conversation and find out how his climb went, but he’s grumpy, delivers gruff answers, and slides past without wanting to chat.

“Some Fun-Factor 3 going on over there?” I ask Mike. Mike speculates the climber turned around shy of the summit and is now surly. I hypothesize he’s a solo climber and, as such, sharing the mountain with lower life forms like us has him irritated.

Forty minutes later, while climbing the steepest slopes leading to the false summit, two more climbers who are on the way down, slide past us on their derrieres. There’s a deep trough in the center of this slope used by those wanting a fast glissade– it snakes downward with many banked turns. The two whoop it up as they blast down the luge course.

“Fun-Factor 1 for sure,” Mike says as we watch (and listen) to their snow play. 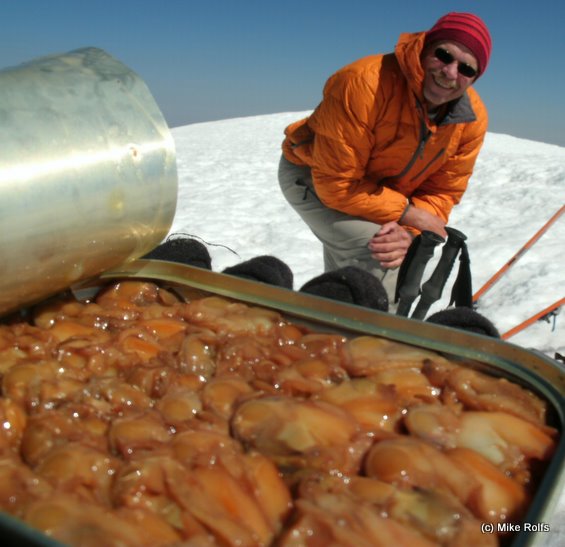 Clamming things up on the summit of Adams.

Before long, Mike and I are actually sitting on the summit and the discomfort of huffing up to this white perch in the sky has given way to the immediate pleasure of long views. I’m also enjoying old memories from different trips that have delivered me to this very spot with different friends and family members. I’m wondering whether nostalgic pleasure deserve its a Fun-Factor rating and where that rating would nest in the scale we’ve been using? Fun factor 0 is also at work as I anticipate the enjoyment of skiing from the false summit down the Southwest Chutes.

Getting to the false summit, however, is on snow that is so irregular and so pitted by wind, sun, and vacillating temperatures that it’s 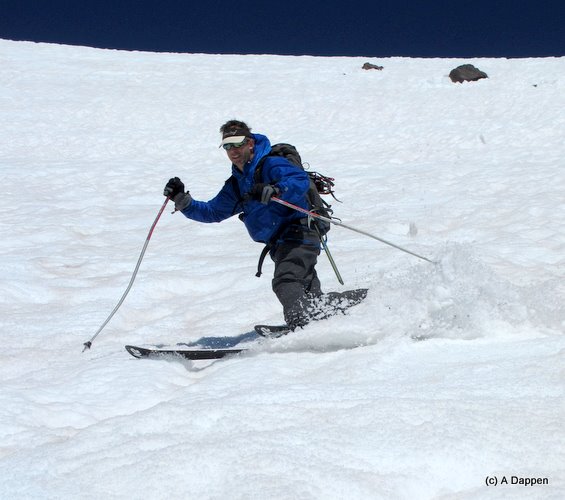 Rolfs skimming across runnels at speed.

nearly impossible to ski. After a dozen out-of-control turns, I remove my skis and descend to the false summit on foot. Mike perseveres and keeps the skis on. When we rendezvous at the false summit and look back at what we’ve descended, he comments, “That may be the worst skiing I’ve ever seen.”

From the false summit, we leave the ascent route and slide to the spillover where we stare down the Southwest Chutes, also known as the 3-3-3 Chutes because the three ribbons of snow found here all drop 3,000 vertical feet while maintaining a steady 33-degree angle. From our perch at the top, we sight down the barrel of the slope and zero in on the terminal moraine we might crash into if we lose an edge. I’ve skied this line before when snow conditions on the south shoulder were garbage and found the conditions here golden. I’m praying for that kind of disparity today.
As we peer downward, however, the chutes are corrugated with parallel runnels pointing down the fall line. It’s as if giant fingers clawed 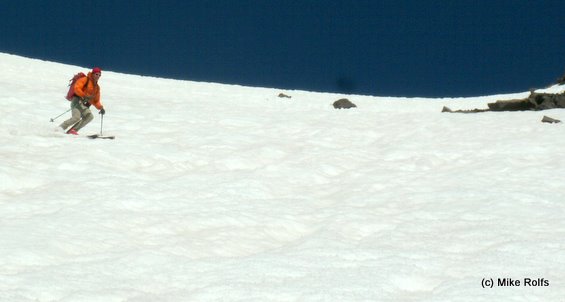 Dappen looking for smooth ground for quick turns. The pictures make the skiing look better than it was.

groves down the entire slope. What we see appears passable but not pleasurable. We slide onto the slope to sample the first of a gazillion turns. That first turn, with half an edge cutting a runnel crest and half slicing air, does not qualify as Fun Factor 1.

Quickly Mike and I divide into two camps on how to ski what Mike calls ‘*rap conditions.’ Mike takes long, fast traverses across the slope, cranks a turn, and traverses the slope again maintaining enough speed that his skis plane over the top of the runnels. I traverse to islands where the runnels are smaller, execute tight turns until the runnels enlarge, and traverse to the next island of relative smoothness. Neither Mike’s technique nor mine is 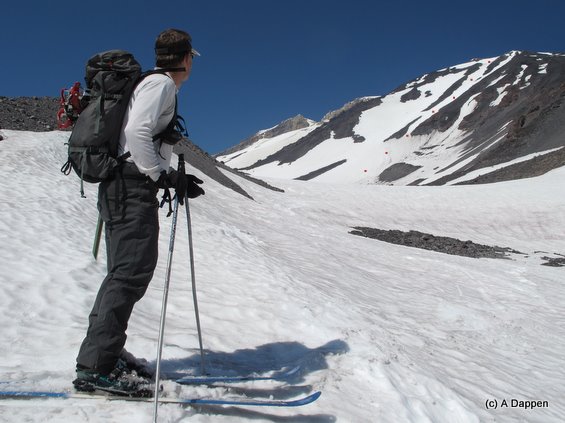 Looking up at the SW Chutes … and thinking fondly about skiing garbage.

worth filming –both are strenuous and ugly.

Halfway down, both of us look desirously at the bottom of the pitch. Not only do we wish we were down, we wonder if we’ll ever get there.

“Does a skier wishing the descent was over automatically qualify that experience as Fun Factor 3?” I ask when we finally reach the bottom of the steeps.
“A few days from now, we’ll know,” Mike says.

We head down gentler slopes where we actually encounter several dozen pleasurable turns. We pop the skis on and off several times as we cross fingers of scree interrupting the last vestiges of snow. At the 7,100-foot level, the snow runs dry and skis go back on the pack. Before hiking cross-country to intersect the Round the Mountain Trail, which will lead us back to the south shoulder, we study our line. 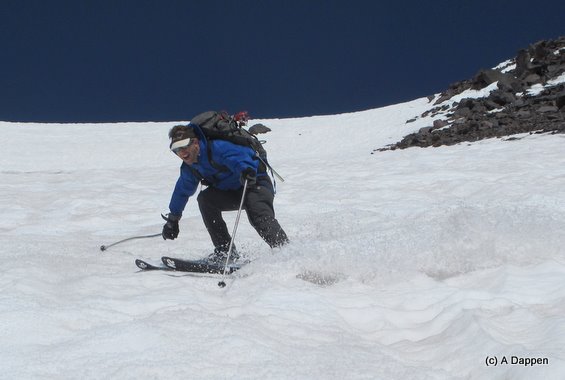 I’m not as certain as Mike. The gelatinous cogs of my mind are already reformulating — what was unpleasant minutes ago actually seems fun now. By nightfall, I suspect I’ll be rating this disagreeable descent a Fun Factor 2.

On the drive home, Mike’s memory remains more accurate than mine. He’s still remembering the bad skiing as bad skiing. Garbage hasn’t alchemized into gold. It wasn’t fun then, and it isn’t fun now. The day after our return he posts information about the trip. “Very fun outing, but crap skiing…. I would say the ski window (for the season) has shut for enjoyable skiing.”
Still nothing about human memory is to be trusted. Two days after our return I send Mike an email asking him what he thinks about the skiing now.

Skill:  2+ to 3: (advanced intermediate to advanced).
Fitness: 3 (advanced) for a day trip, 2 (intermediate) as an overnight trip.

Access. From the Wenatchee Valley, drive Highway 97, Interstate 82, and Highway 97 south to the Columbia Gorge. Near the Columbia River, follow Highway 14 west to Bingen and White Salmon. Then follow Highway 141 north to to Trout Lake. From Trout Lake drive roughly 15 miles on Forest Road 80, Forest Road 8040, and Forest Road 500 to the South Climb Trailhead at Cold Springs Campground (elevation 5,580′). Driving time from Wenatchee is about 5 hours plus stops. Northwest Forest Pass or Volcano Pass needed at the trailhead.

Ascent Details. From the trailhead (5,580 feet) follow the South Climb Trail in a northerly direction until it hits snow (around 8,400 feet in late summer, much lower in early summer). Continue uphill in a northerly direction, keeping on the west edge of the Crescent Glacier. Above the Lunch Counter (9,090 feet) the snow steepens (crampons often useful above here). Keep heading north and reach the false summit (11,600 feet). From the false summit, a northwesterly bearing takes you to the summit (12,278′).

Descent Details. Return to the false summit and then follow a true bearing of 219 degrees to reach and to descend the chutes down to the 7,600-foot level. From here head due south or just a bit east of south (true bearing of 180 to 160) and follow your nose generally down the fall line until you hit the Round The Mountain Trail (this is between the 6,300 and 6,000 foot level, depending on where you hit it). Follow the trail in a southeasterly direction for roughly 2 miles until you intersect the South Climb Trail. Follow the South Climb Trail down to the start.

Strategies. If you’re doing the ascent and descent in day, spend the night before at the Cold Spring Campground at the trailhead. There are tent sites and pit toilets here, but no tables and no water. If you’re doing the climb in a less strenuous push, consider camping at our slightly below the Lunch Counter (9,090 feet). If you’re skiing the SW Chutes you’ll want to time your descent with softer snow conditions. Often the steeper slopes won’t be suitably soft until 1 or 2 p.m.

Permits. Each climber/skier visiting the summit needs a Volcano Pass ($10/person). Self register and pay for the permits 24 hours a day at the Forest Service offices in  Trout Lake. The Volcano Pass has a stub on it that can function as your parking permit at the trailhead.

Map. See our topo map — it has all the route information needed to climb the mountain and descent the Southwest Chutes.