Photo by Mandy McLaren. In orange is Liz and in dark colors is Sarah, heading uphill. It was a day for celebration, at least for me it was. It was my 35th birthday that day. Mandy McLaren, Liz Dunham and myself, went off for an adventure after dressing kids, dropping them off at school, shoveling food in our mouths and hastily sticking skis in the car. It was a ladies day in the mountains which gives an air of excitement all in itself. We drove the 45 minutes to the trailhead and looked at the snow conditions. What skis are we going to wear we wondered? I had brought classic skis and my hok skis, not sure which pair would be better suited for the conditions. Liz had brought backcountry skis and her classic skis. Mandy had brought hok skis.

Surprisingly we each chose a different type of ski. Mandy wore hok skis, I decided on classic skis, and Liz decided on backcountry skis. It was going to be a test to see how each pair of skis performed based on the conditions. The weather was cold to start but warmed quickly. The snow was slushy and slow. For the 3.5 miles of uphill it was easy going for the hok and backcountry skis. “Those skis are showing off”, I thought as I herringboned up many a section with my puny amount of scales on the bottom of my classic skis. My poles breaking through the snow crust and then sinking deeply into the snow made it difficult to use my upper body where my lower body was having a tough enough time as it was. My breath increasing to a pant. Liz checking out the views. Picture by Mandy McLaren. Mandy skinning up in hok skis. Photo by Sarah Shaffer.

With the skins attached to the backcountry skis for the full length of the ski on its underbelly, it made cruising uphill a cinch for Liz other than the weight being more labor some. The hok skis that Mandy wore had half-length skins attached to the bottom. These are non removable skins, unique to the hok ski which grip the snow and give traction to the ski.

As we (me) struggled uphill, while others (Liz and Mandy), easily climbed uphill, we took in the views of the surrounding environs. It was a blue bird day up near the crest of Blewett Pass. We were above the clouds that blanketed the Wenatchee Valley and were enjoying the sunshine, the vivid colors of green in the trees, the bright reddish-brown bark of the Ponderosa Pines. It felt like I hadn’t seen true vibrancy in colors in nature for months. Liz taking her skins off her skis. Photo by Sarah Shaffer.

Once at the crest of the trail, we took in the views of the Enchantments with their craggy peaks jutting out in the distance. Liz removed her skins on her backcountry skis while we all chatted and snacked. After about thirty minutes it was time to say goodbye to this gorgeous spot and head down to get back to the clouds, to the reality of chores, of picking up kids and of making dinners.

Now the true test of the skis would take place for the downhill portion of our outing. The downhill was much faster, especially for the backcountry skis that easily glided along and with metal edges was able to make tight calculated turns effortlessly. The classic skis that I wore were fast enough for the downhill as well. Although my turns were not as easily achieved, still occurred, but more in a “hap-hazard” kind of way. The hok skis for Mandy were unfortunately not up for the conditions and Mandy had to work to get much glide. This was likely due to the very warm snow that had now turned to mush.

Sarah is fortunate to have her dream job as the Executive Director for Wenatchee Outdoors. Her interests include people, nature, wildlife and getting her sweat on outside. Alpine rock climbing, mountain biking and skate skiing are her outdoor passions. Sarah enjoys gardening, baking and home remodel projects. She is the mother of one, which keeps her busy and happy on a daily basis. Activities she would like to pursue that would be new to her are kayaking and backcountry skiing.

Length: about 7 miles (round trip). 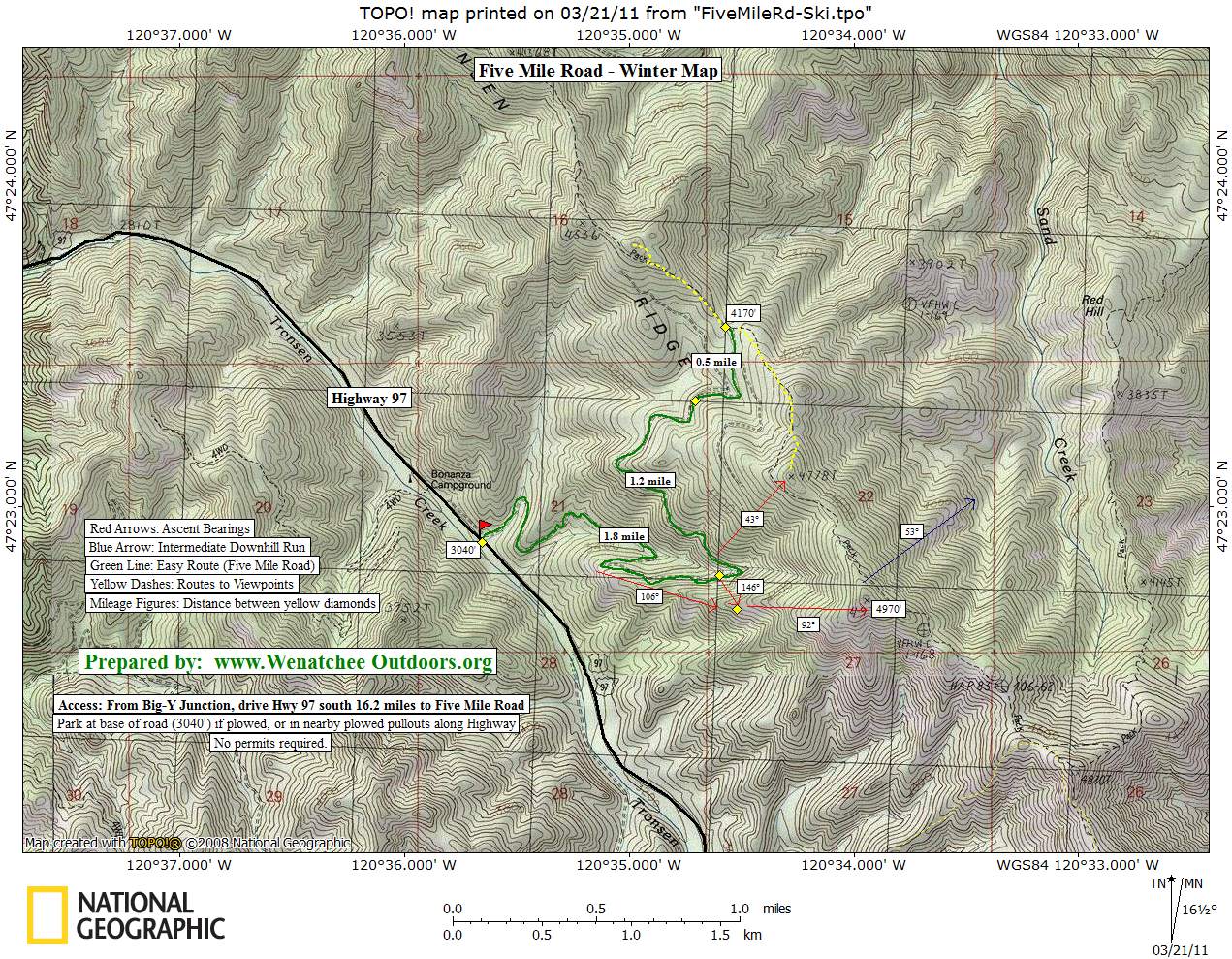 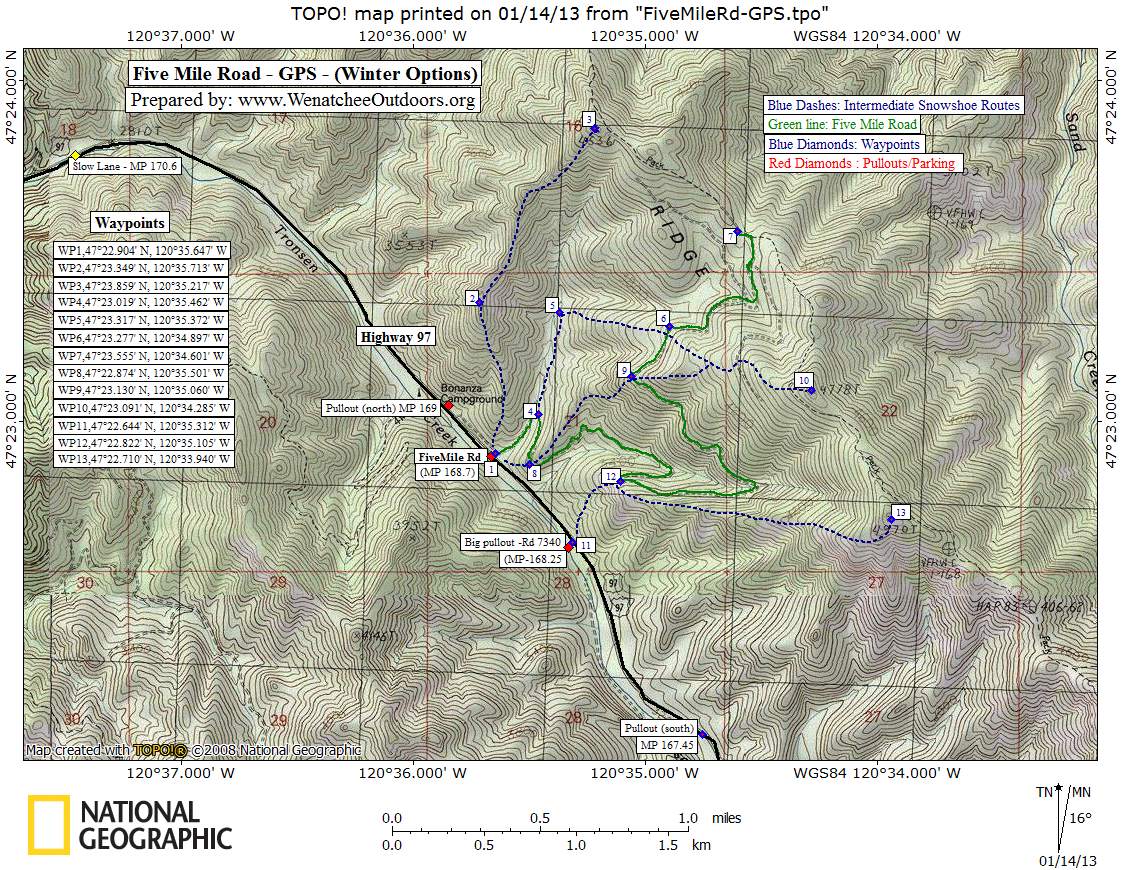