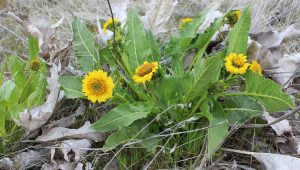 Last weekend I took a jaunt to Ancient Lakes with my family. Meandering along the Ancient Lakes Trail, I was surprised and entranced to see many blooming splotches of color. After a long, colorless winter, the sprouting wildflowers signaled that change was under way. Spring was here and it had me undusting my wildflower identification skills and had me recalling what I knew about some of the surrounding flowers.

The first flower we encountered at Ancient Lakes was the Carey’s balsamroot. This species is similar in size to the arrowleaf balsamroot but has heart-shaped leaves that are vibrant green without the woolly hairs of its arrowleafed cousin. Carey’s balsamroot is found in drier areas once you leave the ponderosa pine’s behind. There are four species of balsamroot flowers that bloom in our region — an impressive number. Some of these species can hybridize to create interesting mixtures that are neither fish nor fowl or, rather, neither Carey’s nor arrowhead. 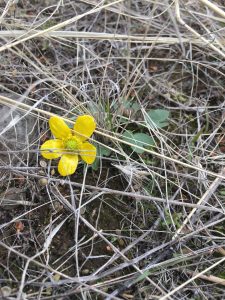 Next we saw the sagebrush buttercup hiding between the grasses. These bright little flowers be found throughout the Columbia Basin and are usually one of spring’s first arrivals. Frequently they grow beneath large shrubs like sagebrush or bitterbrush. Buttercups reportedly contain a potent skin irritant, called protoanemonin, which causes redness and blistering of the skin. Native Americans often used it on their arrowheads as a poison. Mashed and dampened, whole plants were used to alleviate body pains. 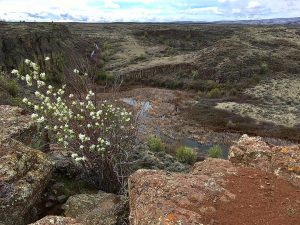 As we walked the trail past lakes and waterfalls, we found many Western serviceberry shrubs in bloom. This is a common shrub to our area that has many fragrant white flowers. Serviceberry stems and leaves are a valuable food source to a variety of animals, particularly deer. The berries are one of the earliest fruits to ripen and are a staple food of birds and coyotes. These shrubs are currently blooming all over our local foothills.