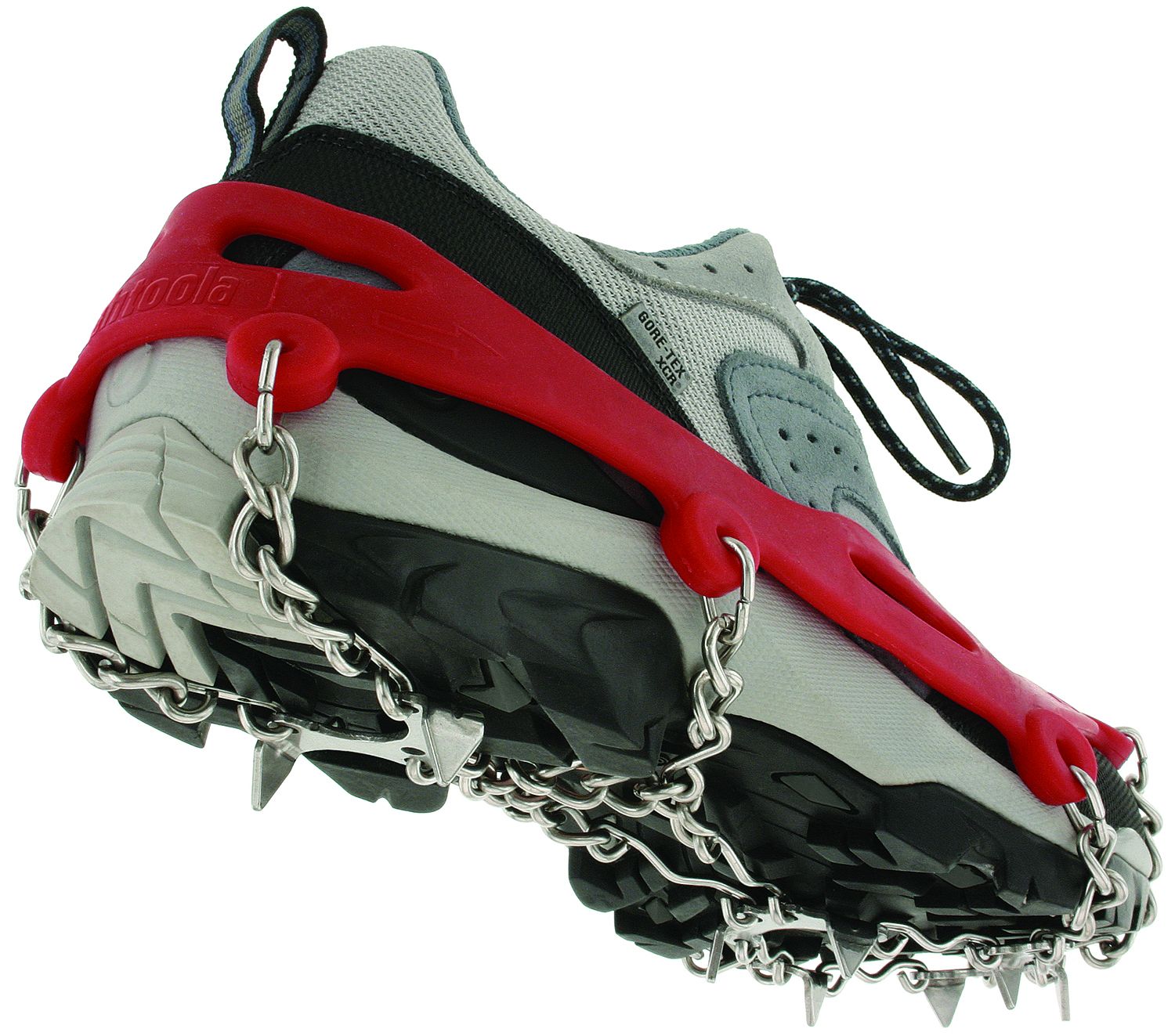 It’s a transitional time of year. There’s not the usual snow pack for Nordic skiing, backcountry skiing, or snowshoeing, but enough ice on trails to make the slip-factor ripe for body slams. Kids don’t worry much about such slams, but adults enjoy getting smacked down to the ground as much as they enjoy sprained wrists, whiplashed necks, or broken hips—which is what they could easily end up with.

A solution for remaining active and upright this time of year? The Kahtoola MicroSpikes (about 13 ounces, $69.95). The product’s stainless steel chains and 3/8-inch spikes provide instant traction while the stretchy elastimer rand that secures the hardware in place makes these ‘studded tires for the feet’ easy to use. I found MicroSpikes to be one of the cleverest, most useful, best–designed products I tested this year.

Clever because a pair of MicroSpikes slips over running shoes, hiking boots, ski boots, and Sorrels in under half a minute. When it’s time to move indoors and walk across the hardwood floor of your friend’s cabin, they pull off even faster. In between the on and the off, the stretchy rand securely clamps onto shoes and boots for miles of trouble-free walking sans straps or buckles. Fabulous.

Useful because MicroSpikes greatly extend the hiking season when slips on frozen dirt (late fall) or icy snowfields (early spring) could easily cause injury. I also found myself carrying these spikes frequently during the backcountry skiing and mountaineering seasons. They don’t replace full-blown crampons for contending with steep glaciers or couloirs. There’s a lot of middling terrain, however, where crampons are overkill, but carrying nothing at all could be underkill. Finally these spikes offer traction in surprising places — muddy trails, wet hillsides, steep slopes strewn with rain-slickened deadfall…

The drawbacks? Depending on the size needed for your foot (four different sizes available), a pair of these puppies still adds 10 to 14 ounces of weight to the pack. Next, you’ll pay an extra $10 to $25 over competitive products. Finally, these aren’t the preferred product if you’re walking primarily on city streets and sidewalks. The rounded coils of Yaktrax and the blunter cleats of Stableicers are easier on your feet and easier on pavement than MicroSpikes.

A recent December hike gives some final insights into the product’s value. A friend and I walked cross-country through a few inches of snow recently to reach the top of Twin Peaks. Initially I walked without the MicroSpikes and found myself relying heavily on ski poles to recover from slips on the snow-covered grass and rocks. As soon as the spikes went on, most of the slip-sliding ended. After a few miles I thought my companion should enjoy the benefit of better footing, and that I should gather his opinion about the product. In two minutes the MicroSpikes were off my feet and clamped onto his considerably larger boot. The difference for both of us was felt immediately: I was relying on the ski poles again, and he was commenting, “These things grip great.”

On we went. We reached the top and descended via a snowed-over dirt road. On one step I misjudged the underlying surface, which was icy and canted. My foot shot forward and, in an instant, it was at chest level. I slammed down on my hip. Hard. My head whiplashed with such force that my ski cap flew off. Were I not a man of steel, I might have lain there with a broken hip, or a strained neck. My friend gave this spastic, super man a bemused smile as he picked up my hat and handed it back, “I’m still not real sure about these spikes,” he said, “I’d like to keep testing them the rest of the way down.”