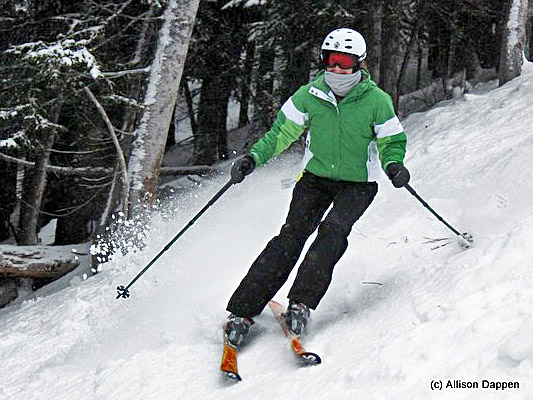 Photo by Allison Dappen. Heather during happier days (downhill skiing). Will she go back to earning her turns? Maybe….

This was the third ski tour I had taken Heather on during her Christmas Break from college. I hadn’t initiated the torture, but when she asked to be taken backcountry skiing, I grabbed the opportunity faster than a kid grabs a proffered glass of chocolate milk.

First we’d skied to a peaklet above Clara Lake and I learned her resistance to cold was poor — I spoiled the milk by letting her freeze over our lunch break.

Then we’d had a better outing – we kept moving and found a descent with acceptable snow, though nothing approaching the divine.

This third outing, therefore, was meant to be the clincher. With silky snow I could convert her to this brand of madness. But conditions proved less than dazzling.

“So why did you take her out when the skiing was bad?” my wife criticized.

“Because I’m not psychic,” I snapped. “I thought the snow on Diamond Head would be good today.” 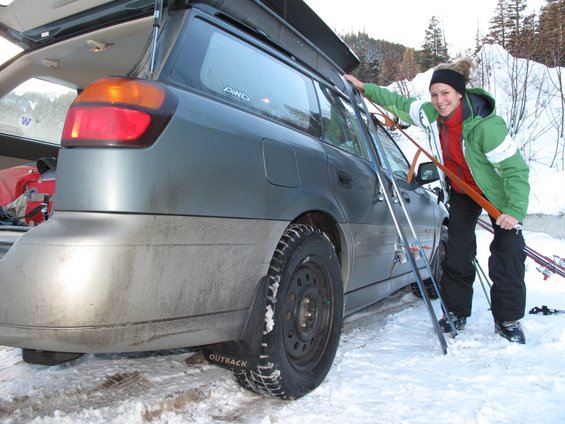 Photo: Heather Dappen skinning up for battle. “Your choice, Heather, but you might want to put the sticky side down.”

In fact, the skiing down the eastern slopes of the Blewett Pass landmark probably had been good earlier in the day. Unfortunately Heather was out of synch with the temperature cycles. She’d been hitting the sack at 3 a.m. and rising around 11 a.m. — so, on this warm day when the east-facing slopes probably offered sun-softened snow to carve around 1.p.m, we were still hours away from descending.

Photo by Allison Dappen. On the zig-zagged trail to either ecstasy or misery. 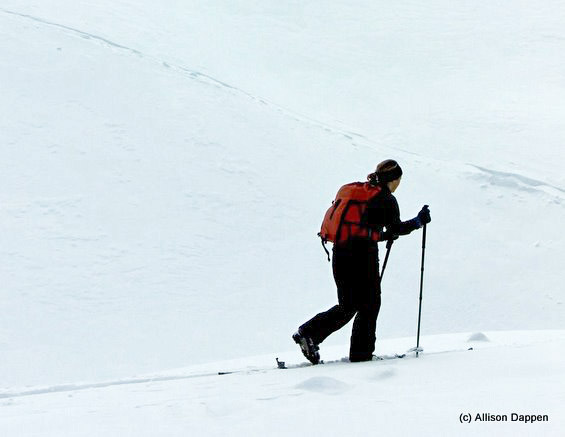 By the time we were in downhill mode, those same slopes were sunless, cold, and armored with a crust. The crust, if skied aggressively, could be punched but, thinking this might be slightly beyond Heather’s ability, I suggested she connect survival turns with longer traverses that would dissipate speed. A father’s advice, of course, is meant to be unheeded — Heather had movie footage reeling through her head and she intended to shred. The crust had other intentions and the descent became less about shredding and more about humility. Humility is a great lesson, but it was the wrong bait for hooking a new recruit.

The entire outing proved topsy turvy. Once off the steeps, Heather expected tedium from the lower half of the tour. The initial two miles spent approaching Diamond Head had struck her as pancake flat. Twice she ‘commented’ (i.e., complained) about the slog and asked whether we would need skins for the way back. “It’s not as flat as you think,” I told her.

She hadn’t believed that but, on the re-frozen snows of late afternoon, we skimmed over the dreaded miles…fast. The skis chattered on the steely surface as we blasted down the road, sometimes on the verge of  recklessness.

At the car, the girl who had been sour 15 minutes earlier was smiling. “That part was fun.” 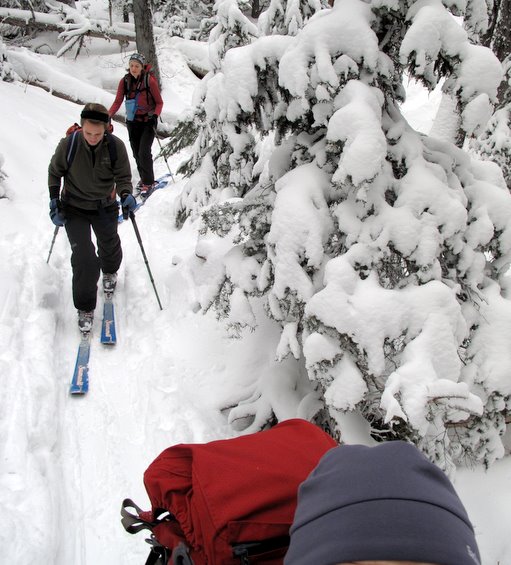 The family that skis together… gets mad together. Heather in center with her sister behind, prodding her along.

A few days later I pose my wife’s question to my daughter. “Did I ruin backcountry skiing for you?”

She gives me a quizzical look. 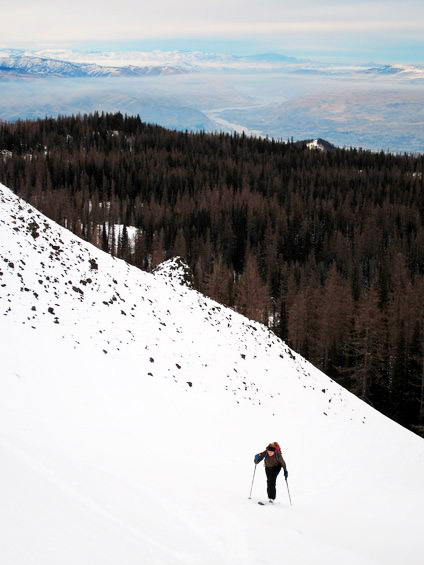 “Did the frustration of the last tour sour you?” I clarify.

She thinks about it. ”I think I have really bad short-term memory,” she confesses. “I’d forgotten about the unpleasantries.”

“How nice that you take after your father rather than your mother,” I tell her, now anxious to get her back out on the boards. “Given that character flaw, I’ve got a lifetime of abuse in store for you.”

Photo: Climbing into the view zone above Clara Lake