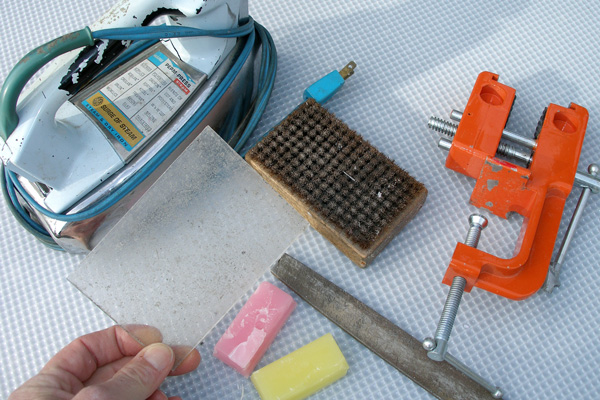 Most of the essential tools and supplies: iron, copper-bristled base brush, ski clamp, plastic scraper, wax, and file (for sharpening the scraper and ski edges). Note: Old irons like the one in this picture are NOT recommended — most people run such irons too hot and can scorch their bases.

1) Glide waxing makes skis and boards do what they were designed for—glide. Fast. With minimal effort. Which appeals to just about everyone because if you’re not intrinsically lazy you’re probably intrinsically competitive. Skis that glide effortlessly appeal to the lazy; those that glide fast appeal to the competitive.
2) To protect your investment in expensive tools. Wax is to ski bases what sun screen is to skin. Without frequent waxing (or with no waxing at all) your bases will absorb moisture, be affected by UV light and air, and slowly harden and oxidize. Once that happens the skis won’t take wax well and won’t perform anywhere near their potential. The only fix for neglected bases is a stone grind that will once again expose good material to that thin interface between ski and snow.

Wax skis roughly every three times you use them or once a week—whichever comes first. If you only ski once every week or two, wax your boards right after skiing. This protects the bases should the skis sit for a few weeks in a damp garage. Also, at the end of the season, apply a heavy coat of wax to the bases (medium harness) and don’t scrape away the excess until the first day of skiing next winter. The thick wax layer will protect the bases from moisture, air, UV, and heat over the summer.

If possible, wax the skis in a room warmer than 50 degrees F. The room should be well ventilated and in a room that won’t create death-by-spouse when you drip wax onto the floor—which is going to happen. If an outside porch or a cold garage proves to be the only spouse-safe location, warm the skis inside, bring them outside one at a time to apply wax, and then put them back inside after applying the wax.

To do the job right (and make it easy enough you won’t mind doing it), here’s the list: vices to hold the ski to a table or workbench, wax remover, soft copper-bristled base brush, waxing iron, groove pin (for scraping the center groove), multi purpose scraper (for scraping the edges and side walls), plastic plexi scraper (for scraping the ski bases), nylon-bristled base brush, and a lint-free rag. Here in Central Washington the glide-wax arsenal for non-racers using Toko products (Swix has similar products) is simply the yellow wax and the red wax of Toko System 3.

A can of Toko IROX (liquid hot wax spray) is a useful salvation on those days when you’ve forgotten to give your skis a proper hot wax. It only takes a minute to spray on this liquid wax and rub it into the ski bases with vigorous buffing of a handkerchief or a cork (you can also iron in the wax like a normal hot wax). Ideally your skis should be pre-warmed so the wax penetrates the bases better, which means you should wax at home before heading up to the mountains. However, you can also throw the skis inside the car, warm them while driving to the mountains, and waxing upon reaching the mountains. Backcountry skiers who apply Irox in the wilds after skinning uphill should, dry the skis well, point the bases at the sun to warm up, spray on the wax, buff the skis well, and then point the bases at the sun a little longer.

Even though many Nordic skiers use ‘No-Wax’ skis, the tips and tails of these skis need glide wax. The ‘no-wax’ moniker marketers cooked-up refers to the fact that such skis don’t require grip wax for gentle climbs.

HOW: THE ABCs of PROPER WAXING

Eric Redrup, at one time the marketing man for the Leavenworth Winter Sports Club, gave a ‘free’ waxing clinic at Leavenworth Mountain Sports that I attended a few years ago. Although the clinic was excellent, ‘free’ was a misnomer. Many of us realized a number of purchases were in store if we wanted to wax frequently, quickly, and properly. Dr. Keary Kunz found the free clinic cost him over $100. In the end, he rationalized it was money well spent to keep the many expensive skis in the family arsenal healthy and gliding fast. Here are the basic steps Eric outlined for us:

1) If the skis are quite dirty, use a wax remover and rag to wipe them down. If the skis are relatively clean (or have just been wiped down with wax remover) use the soft copper-bristled brush to clean the ski. Brush only in a tip-to-tail direction, pushing down with moderate pressure as you swipe the length of the skis three or four times. Wipe down the ski with a rag.

2) Using a waxing iron set at 265 degrees F or 130 degrees C (a temperature you can use for any glide wax), touch a bar of wax to the iron and let the melted wax dribble onto the ski bases. Use plenty of wax because when you spread this with the iron, you don’t want the iron touching the unexposed ski base. Serious waxers recommend a real wax iron to accurately control the heat and to keep from overheating (and damaging) your skis in the next step. Basic but completely functional waxing irons like the Swix T75XF cost about $50.

3) Iron out the dribbled wax so spreads out in a uniform sheet across the ski base. Move the iron in a tip-to-tail direction at a uniform speed, covering the length of an adult’s ski in 10 to 15 seconds. The wax should be thoroughly melted as the iron moves off it, but you don’t want to keep the iron on any part of the base very long. This is a touchy process—if your iron is too hot, your use of wax is too skimpy, or you move the iron too slowly, it’s easy to scorch the ski bases so that they harden and no longer absorb wax well. Ski bases that pool wax or are blotchy in how they absorb wax have probably been scorched with too much heat.

4) Make two or three passes of the ski with the iron as described above before setting the ski aside to cool for 10 to15 minutes. A ski with a good amount of wax on it will have the center groove half filled with wax. Grab another ski and repeat steps 1 to 4.

5) After 15 minutes, use a groove scraper to clean out the excess wax in the groove. Next, run a scraper along each sidewall to remove wax that has spilled off the bases.

6) With a sharp, plastic scraper moved in a tip-to-tail direction, apply light pressure to shave excess wax from the base. The scraper should be tilted forward and held at about a 45-degree angle to the ski bases so the edge of the scraper makes a clean cut of the excess wax.

7) Use a short, stiff nylon-bristled brush to vigorously brush the ski. Move the brush parallel to the length of the ski. With the nylon brush, it’s OK to scrub the brush back and forth in opposite directions. The idea here is to get the wax out of the ‘structure’ of your bases. Cleaning out the structure of the bases makes the ski considerably faster—especially in wet-snow conditions.

8) Use a clean, lint-free rag to buff the base.

An even better way to wax is to use a hot box set at about 135 degrees F. Perform steps 1 to 3 above and then place the skis in a hot box (bases up) for two to three hours. Using a hot box and gravity to pull the wax down into the pores of the skis, the bases absorb about 3 times more wax than through the hot-waxing process alone. After several hours in the box, remove the skis and complete steps 5 to 8.

If your ski bases are in bad shape because you’ve ignored them for years or because you’ve scorched them, get them stone ground. Many Alpine ski shops can handle metal edged skis, snowboards, backcountry skis etc. Nordic skis can be stone ground with a Nordic grinding machine. One of two or three such machines in the country is in the Methow Valley. Contact Mark Waechter at Nordic UltraTune. Eric Redrup recommends the MVX grind ($58).

Find many more how-to articles for skiers and boarders of all stripes at:Toko Info Center .

Streamed video clips showing how to maintain various types of skis and boards for recreational use or racing at: Swix waxing school. This site shows some of the same techniques described in Eric’s clinic but also quite a number of different waxing techniques worth considering.

A $2 and fairly thorough waxing manual you can purchase is Swix’s Racing Manual—Nordic Ski Preparation. It’s available at Arlberg Sports.