This is part two of the story on beginning bikepacking. Part one can be found here.

In this section, I had a captive audience with Marlin Peterson as we drove east to Spokane. I had some scripted questions to ask him because of his wealth of bikepacking knowledge. Marlin has been a resident of the Wenatchee 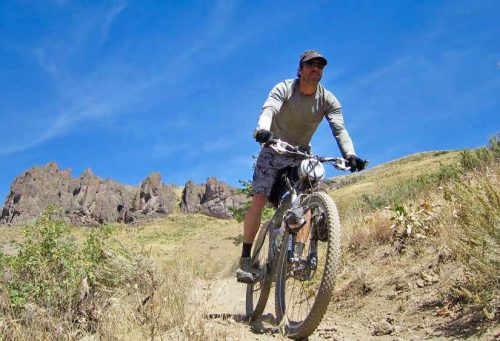 Valley for around 10 years and is currently an adjunct Art professor at Wenatchee Valley College. Before making his home here, he lived in the Seattle area and frequently traveled to far off places around the globe bike touring or bikepacking. Since moving to the dry side of the mountains and starting a family, he still finds time for far flung adventures but has a bit more cargo, including kids, trailers and diapers.

What is appealing about bikepacking?

Right out of the gate, he proclaimed, “it’s not the breaths you take,” he said with a wry smile. “It’s the moments that take your breath away.” Discussing the appeal of bikepacking, Marlin kept circling back to the idea of not having to come back to his car. “By taking all of your resources with you, you just get to go farther and farther and never have to loop back around to your car. You can keep riding until you’re exhausted.”

What gear is essential?

Peterson said “essential” gear depends on the length of the ride and the terrain. He said for most rides, the important things to bring are a frame bag and a seat bag because you can pack a lot into them and take the weight off your body.

He carries water bottles on trips where replenishing sites are scarce, such as one he took to Baja. He carries most of his water in a silver “disposable” bulk starbucks coffee bladder, the kind one finds inside a garbage can. 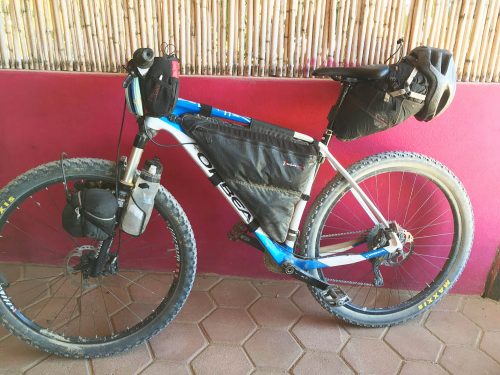 The seat bag carries the bulk of his camping gear, including his sleeping bag, pad, hammock, inflatable pillow and a sleeping layer of thin polypro. In the frame bag he carries the rest, including the water bladder, his pocket stove, fuel and food. He often carries a “ghetto tarp” that he ties to a tree or rigs up with the wheels of his bike to create shelter. “I like to sleep out whenever possible and be as minimal as possible,” Peterson said. “Sometimes you’re on and off your bike for up to 12 hours, so flat pedals and comfortable running shoes are nice to ride with.” A pair of flip-flops, which will feel like a luxury item to your tired feet, are lightweight and easy to pack. 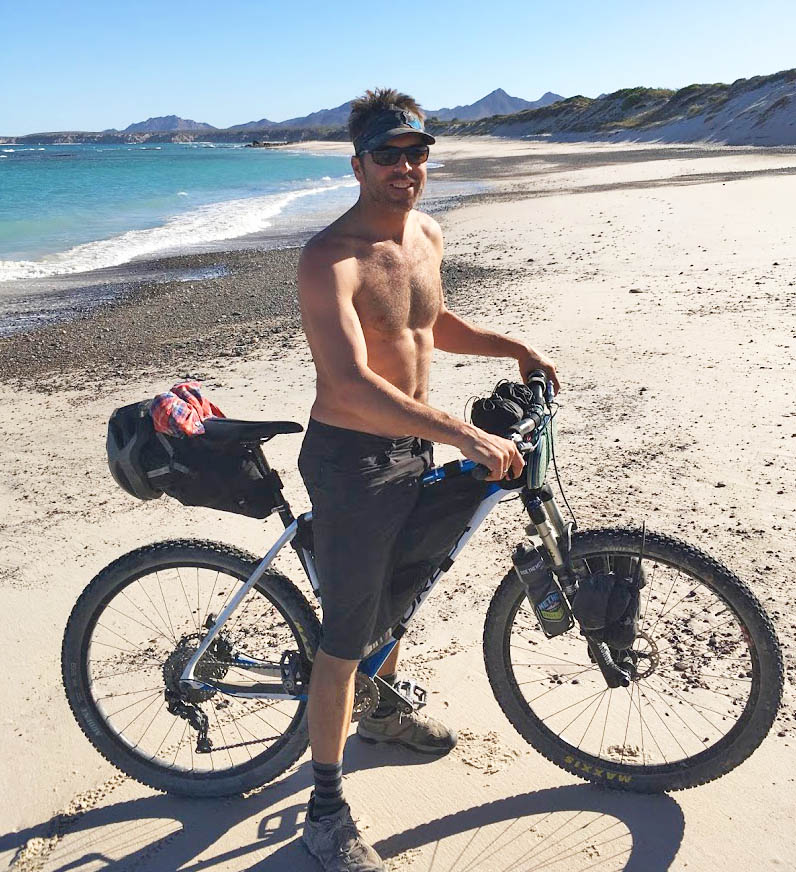 How have bikes adapted as bikepacking becomes more popular?

Marlin answered my question rhetorically with, “Who wouldn’t want to carry their stuff on their bike versus on their back?” He noted that the trend now is to bring minimal gear and carry stuff by strapping it to the bike itself.

Newer bikes are designed with bikepacking in mind, with more eyelets that are stronger than a standard water bottle cage mount. A three-bolt standard can accommodate larger and more versatile bike bags that can be strapped on the down tube, top tube or wherever your imagination takes you. King Cage USB clamps are a cheap way to add eyelets to your bike, or you can use hose clamps to mount equipment cages. But generally Marlin seemed disappointed with how far bikes have come: Marlin believes that minimal racks with drybags are superior to all the hokey handlebar rolls and overstuffed saddle bags you find.
“Why can’t we just get a standard for rear racks that have bolt holes larger than water bottle bolt size?” Marlin asked.

How can someone bikepack who may be short on time?

One option is a S24O which stands for Sub 24 Hour Overnighter. If you have a lot of light in the day you can leave for a quick bikepacking trip after work and be back to work the next day. When the days are longer, some people near Seattle will get on a ferry or bus after work at 5 p.m. and go for a four-hour ride, set up camp, then head to work the next morning. It’s a great way to continue the bikepacking stoke and fire up the adventure wagon even when you’re budgeting your time.

What are some local areas you’ve bikepacked?

Some or Marlin’s local favorite areas include the Upper Entiat, Mad River, Salmon La Sac to Wenatchee above Ingalls Creek and the Colockum.

Any tales from the trails that stand out?

A few years back Marlin completed what he labeled the TWEet (Trans Washington Epic) which was a two-part ride that spanned the vertical length of Washington. Here are his thoughts on that adventure.

This ride was done in two pieces and linked up as many trails as possible as well as some fire roads. A lot of time was spent calling ranger stations, pouring over maps and in front of a computer in order to link up as many dirt roads and trails a 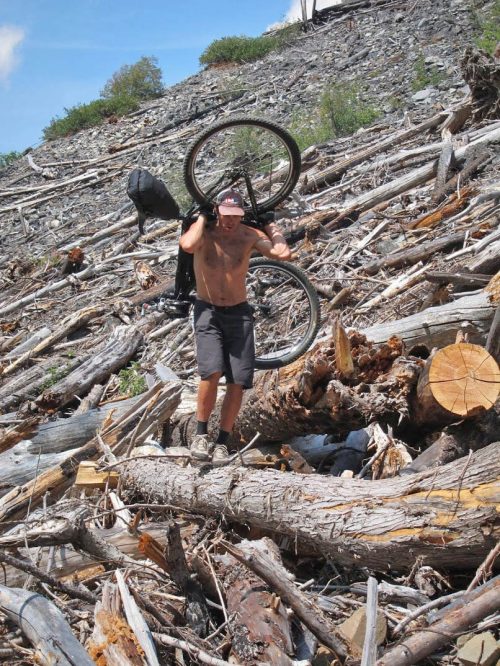 s possible. He rode from the Canadian border to I-90 in one stretch, then when the weather improved, from Oregon to I-90. He tells the story of one tense moment during the southern stretch where the SPOT transmitter he had borrowed became unresponsive. Marlin believed the batteries he put in were in fact not fully charged and he did not know it wasn’t transmitting his location.

His wife, who was in Nicaragua at the time tracking his progress, was concerned because it showed his location as stationary for three days straight. Without cell phone reception, she had to wait until he finished his ride so he could call her to let her know he was finished and okay.

For this trip he welded special racks on the front and rear of his bike to accommodate his gear. For the first leg he didn’t bring a stove and made fires along the way for cooking, but on the second leg carried a stove.

Describing the difficulty of piecing together his TWEet ride he said, “We have a lot of contiguous wilderness areas in Washington state that make many areas inaccessible to bikes, unlike areas like Colorado that have old mining areas that have never been claimed. Finding passage through areas that are off-limits in Washington was easier on other adventures, like the Colorado Trail, where mining roads criss cross wilderness areas and made getting on and off the route easier. Route planning and map management was a key factor in the success of his Washington adventure, but in his quest to stay mainly on trails and forest service roads, the lack of access to certain areas made that a challenge.

Describing some of his difficult times on the bike he said, “I’m energetic to try out new trails to a fault. My tolerance for pushing is higher than it should be” in anticipation of what’s on the other side.

I remember Marlin giving a slideshow one night about the Colorado Trail and describing 30+ miles of pushing his bike over baby-head sized rocks. Another difficult time was on a recent trip in the tri-county area near Mazama, Harts Pass and Shady Pass where he and a riding partner had to carry their bikes a lot. At one point, bike balanced on his shoulder, he found himself 10 feet above the ground, walking on logs that stretched out blocking the trail. Hefting all of his gear and bike at one time helped him cross over in one trip while his friend decided to remove the gear from the bike and do two trips.

But don’t be discouraged by Marlin’s difficulties as he purposely seeks out greater challenges to scratch his adventurous itch. If you like to bike and like to camp, bikepacking can be an easy marriage.