I love our valley’s springtime outdoor smorgasbord. As hillside grasses morph from brown to green and yellow Arrowleaf Balsamroot paints the valley sides, the higher peaks still glisten with coats of pristine white, and I think yet of winter sports. 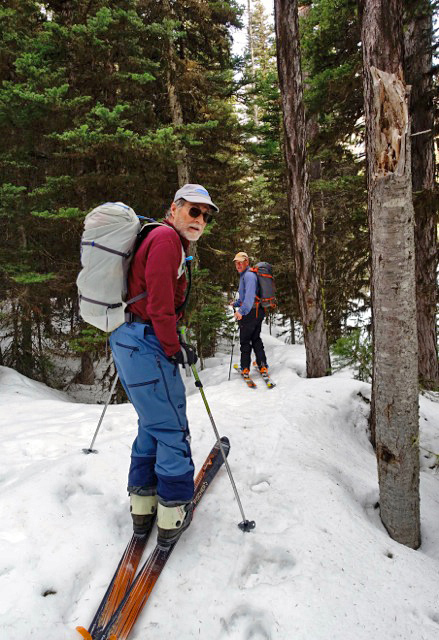 Mark Shipman (in red) and Tom Janisch (in blue) posing for the camera.

The Hog Loppet comes to mind. It’s been 4 years since the last official February Hog Loppet event, and I have missed it. My family, friends and I participated many times over the years, and winter without the Hog is like a BLT without the bacon, or a Leavenworth Ocktoberfest without brauts. 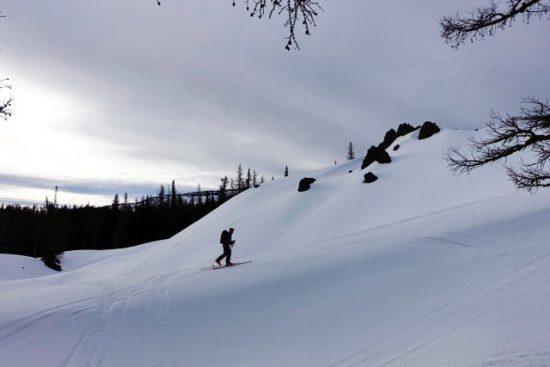 The Hog originated with intrepid locals, merely out for a lark, backcountry skiing through the local mountains from Blewett Pass to Mission Ridge. In 1989, the first official organized trek occurred with only about 40 skiers participating. Larry and Penny Tobiska christened it the Hog Loppet, loose Scandinavian for “Citizens High-Country Ski Trek”.

The next year, the direction was reversed and, as word spread, skiers from far and wide flocked to our valley, lured by the chance to do a 21-mile wilderness high ski over a marked and avalanche checked course. The views were awesome, weather permitting, which usually it did. Food and water were provided en route. Skiers used various types of gear and, in the latter years, most of the route was groomed, making it possible to skate. Annual attendance routinely topped the 500 person mark.

The Hog Loppet, as a public event, fell victim to the same features that gave it appeal – altitude and remoteness.  The route was prone to problems too often requiring cancelation at the last minute – not enough snow some years, avalanche dangers others, or winds topping 100 mph on the event day.  A replacement arose located in the Lake Wenatchee area. I did the new Moose Dewlap on it’s inaugural two years and had a good time, but it was just not the same. Since the last Hog Loppet was held in 2013, I have felt like something is missing each winter. 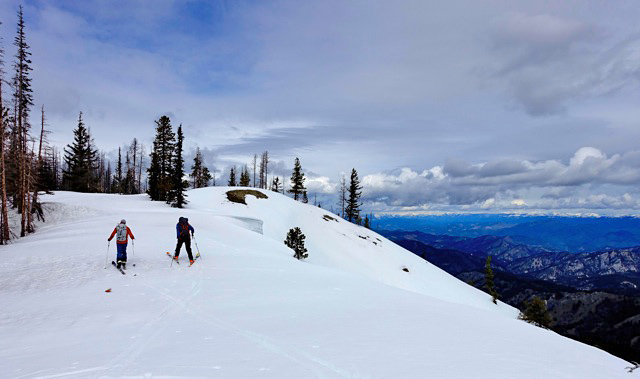 Mark Shipman shared these thoughts and recently we decided to do our own Hog! We easily recruited another companion, also a glutton for punishment, Tom Janisch. I was glad he joined us at the last minute to help us not get lost. Mark and I have occasionally been temporarily “disoriented.”

We set out early on April 23rd, and the punishment began immediately. Instead of riding the chairlift to the top of Mission Ridge, as had become standard on the later organized treks, we had to snort and grunt our way upwards right out of the parking lot, first roughly following the part dirt, part icy snow covered trail to Lake Clara. Using skins for traction, we turned off towards the high shoulder of Mission Peak at near 7,000 feet. 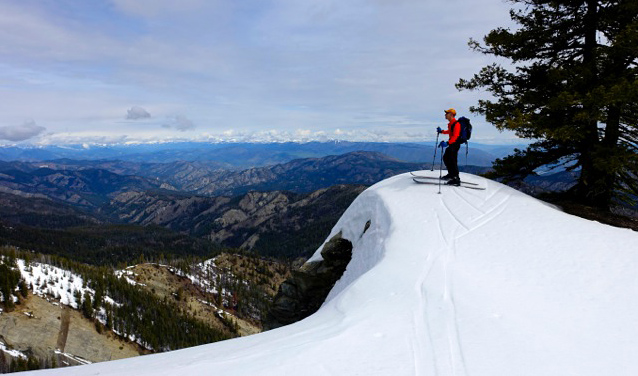 Our views opened up and we went hog wild!  We were now able able to shed the skins and flew downwards to rejoin the old course. Janisch was in his element, careening down like a greased pig as he squealed with pleasure, followed by Mark and then myself. We came across some of the old blue diamond route markers placed long ago to mark the Hog. We were in hog heaven with the stellar views I so well remembered.  To the west lay Mt. Stuart and the Enchantments, to the north was Devil’s Gulch and Glacier Peak, and spread out below to the east lay the Wenatchee Valley with the mighty Columbia snaking along.

After the slopes, we struck out on the Beehive Road, buried in amazingly deep snow for late April. Now came the real work as we hoofed it along the old route using our heavier backcountry skis.  I thought fondly of the past  years when this part of the path was groomed and we’d fly along using light skate skis. At least we were trending down, but still faced sections of uphill travel. Time passed easily though, with the crisp air, wonderful scenery, and entertaining stories by Mark and Tom of their years of volunteer work, fellow skiers and notable events on past Hog Loppets. 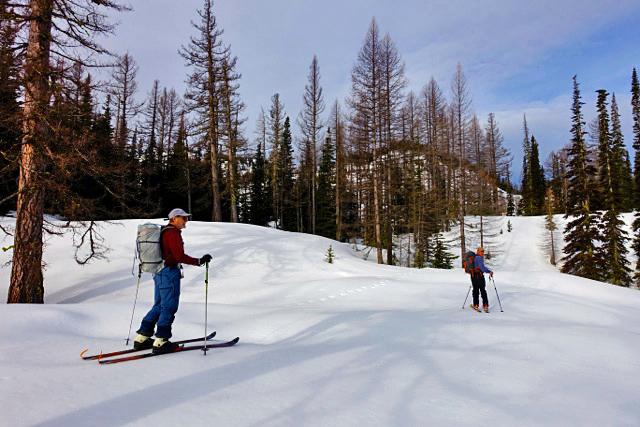 When the event was organized, two checkpoint stations were placed along the route at about 1/3 and 2/3 of the way.  To be sure all registrants were safely accounted for, bib numbers would be recorded. Hot drinks and all manner of snacks for the pigging out were provided, a veritable trough of cookies, fruits, candies, etc.  The checkpoints were quite the social centers for visiting with fellow skiers during a well deserved break.

We reached the first checkpoint at about noon and were alone in the mountain silence. It was very different to do this route with only us three little piggies. Indeed, we saw no one else all day. 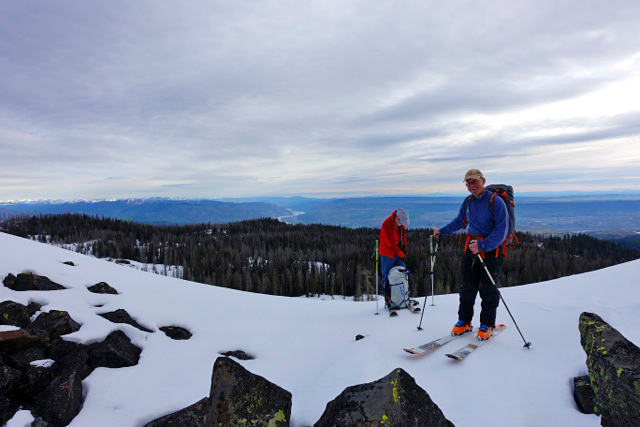 More than two hours later, we passed Haney Meadows, the second checkpoint of the old event.  This was always a welcome spot to reach, for by this time it is only two more miles of uphill and then five miles of mostly downward travel. It still took over another hour, and on the way we got a full on winter experience with a half-hour heavy snowstorm with big winter flakes.

Shortly before Blewett Pass, we encountered patches of our route lacking snow cover. Despite this being a heavy snow year, it’s good we had not waited any later in the spring to do the old route – we didn’t actually want to do a mud wallow 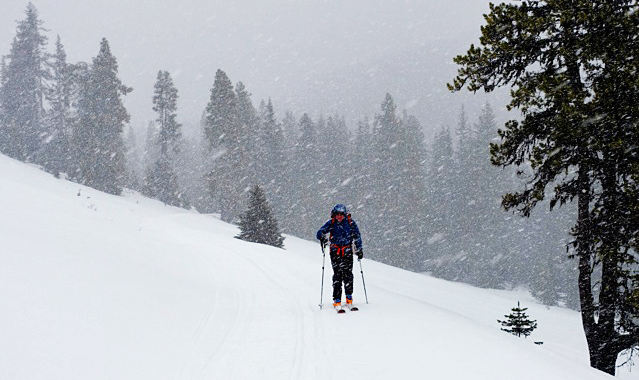 on the Hog.  Still, it was rather amazing to be doing this in late April while only a short distance away — as the crow flies — folks in Wenatchee were mowing their lawns and, for the next day’s exercise,  I’d be trail running in flower meadows.

At the end, after going about 23 miles, we had no congratulatory crowd like in the past, we just took off our skis and departed.  I kicked myself for not making up a faux Hog Loppet banner or bibs (numbered one, two and three of 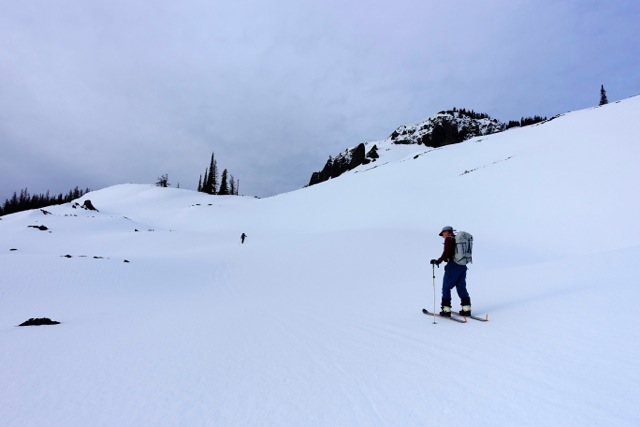 course!) to surprise my friends!  But we had a fabulous day resurrecting the old Hog Loppet, and were all as happy as pigs in . . . well, you know! 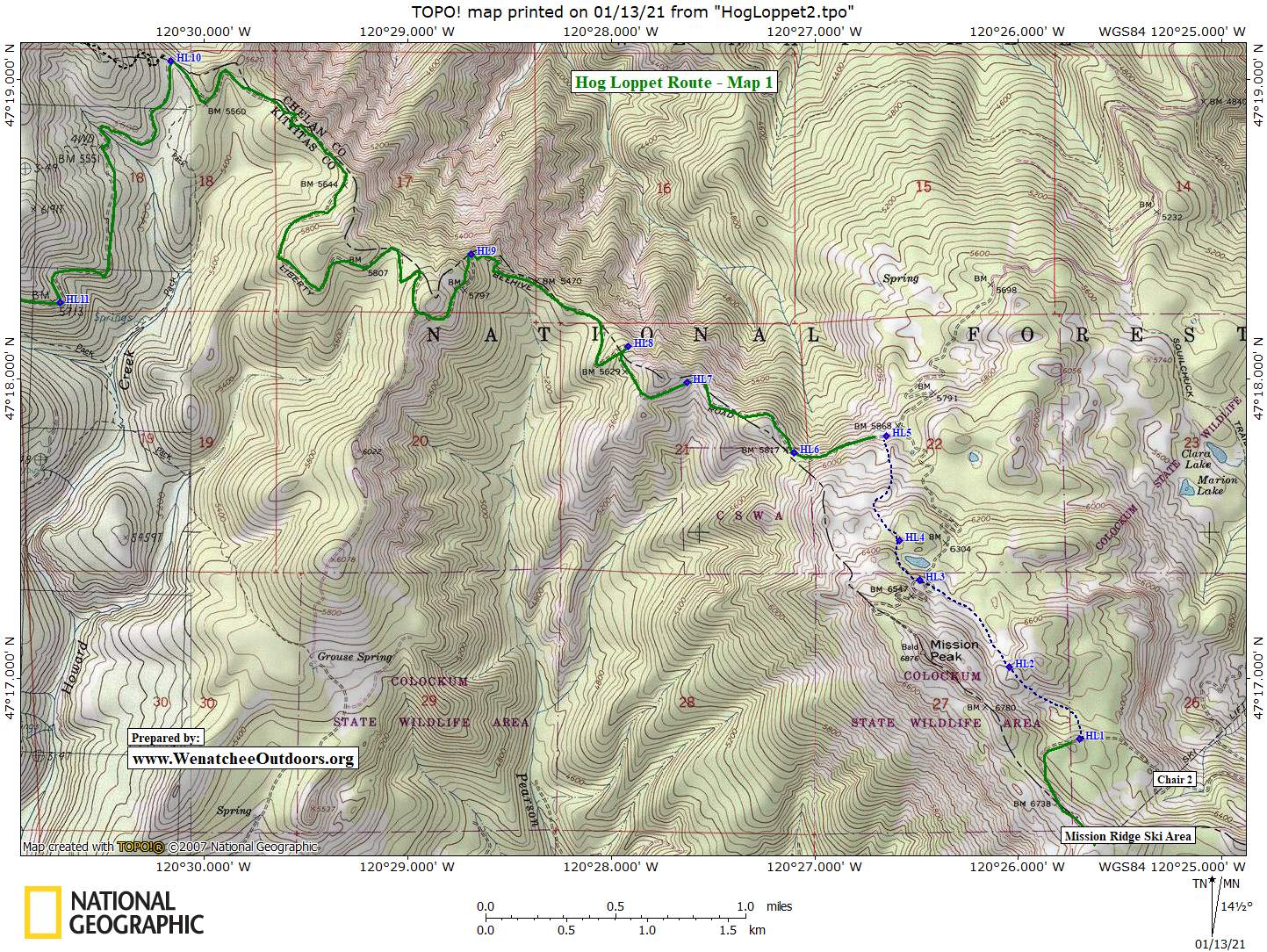 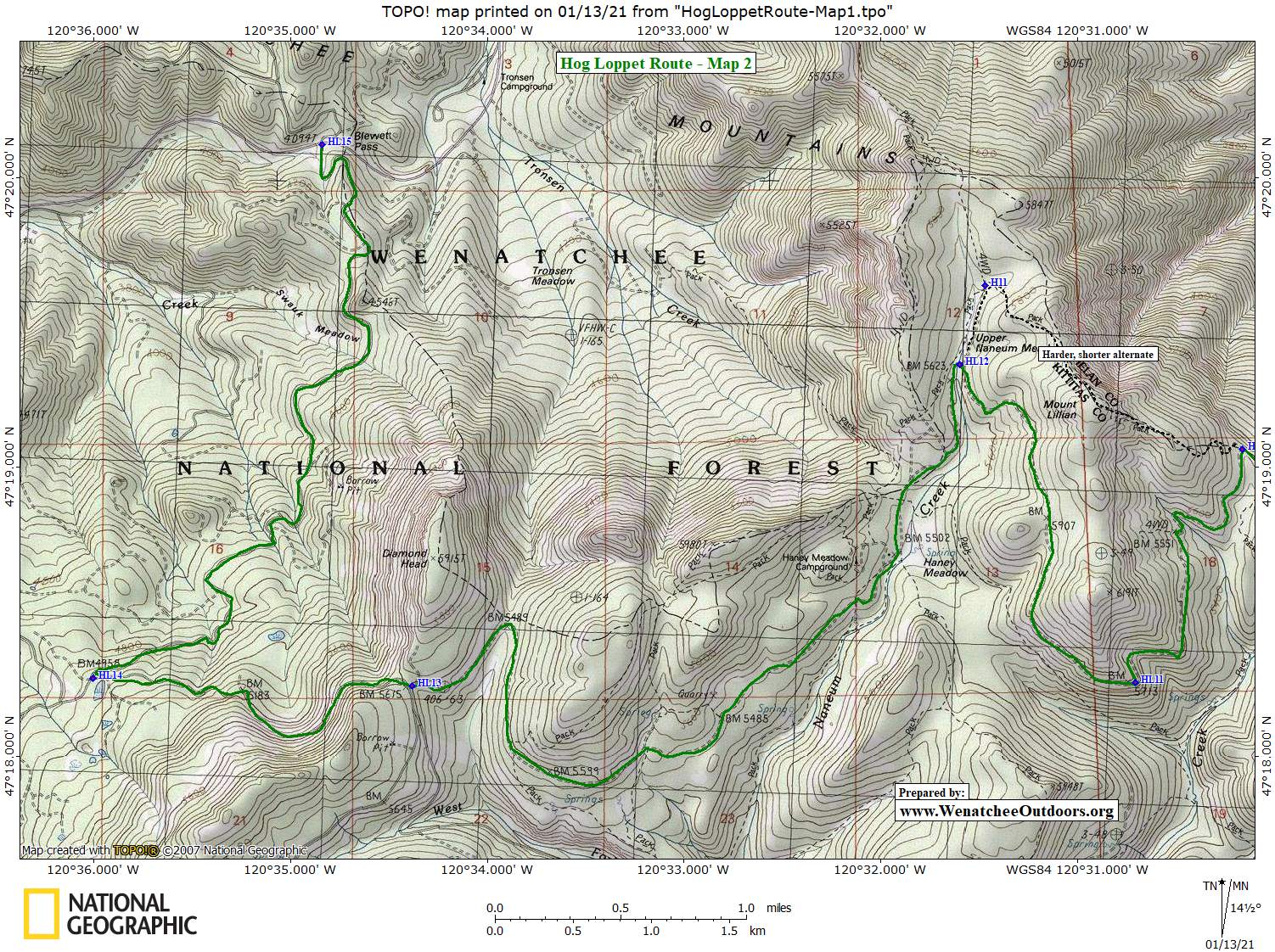