The Hitch-Hiker
by
Andy Dappen

“Going to the Pass?”

Snow sticks to the hitch-hiker’s pile hat as he sticks his dripping beard through the car window.

I want to tell him I didn’t pull over to pick him up, I pulled over to drain my bladder. But I’ve been where he’s at. “Yeah, throw the skis in the back,” I tell him, “I’ll be right back.” 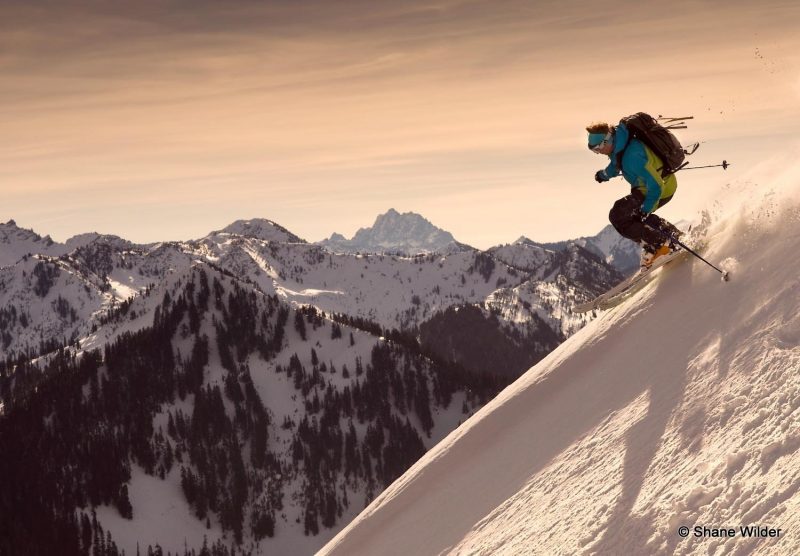 Soon he’s asking me if I ski the pass much. I watch the water dripping off his soiled coat soak into the clean upholstery of my car.

“Often enough to be a little bored with it,” I tell him brusquely.

He gives me an odd look. “Ever skied Highland Bowl?”

“Never heard of it,” I confess.

“How about the chutes off Tye Ridge.”

“You must have skied the glades down into Schim’s Meadow.”

“Geez! What have you skied up here?”

Not much, I deduce by the time we reach Stevens Pass. Apparently, there is much to learn about a hill I’ve skied fairly often over the years, and because I’ve granted the favor of a ride, I am positioned to ask a favor. “How about an insider’s tour of the hill?” I say. “Payment for the ride up.”

The brown eyes brood as he weighs the onus of his obligation–it’s as if the high school quarterback has just been asked for a date by the homeliest girl in the school. 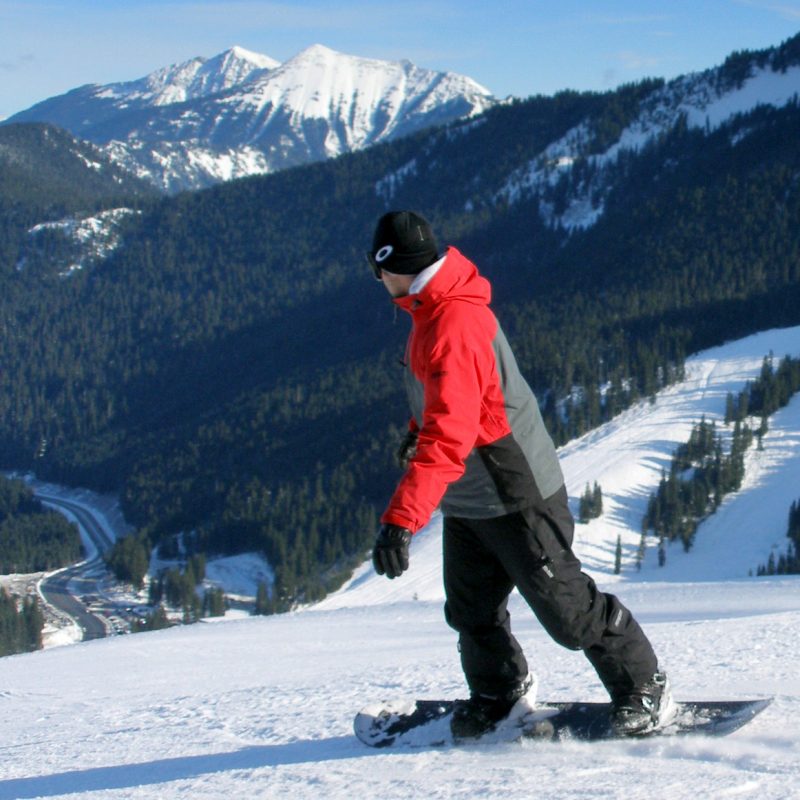 Twenty minutes later we’re riding the chair up to Seventh Heaven over a steep, rocky chute with a veneer of glare ice. He sees me eyeing the lone track that has ventured in.

Probably won’t? I’ve got a bad feeling I’m in over my head.

The top of Seventh Heaven is the source of many of Stevens’ steeper lines, so I make a meek suggestion. “How about a warm-up run?” Friendliness exudes from my guide like spit from a camel’s mouth.
Three local boarders who exit the lift behind us start chatting with the hitch-hiker and they all agree Tunnel Creek is the run of the hour. It’s a Stevens Pass classic, the boarders tell me, dropping a 1000-vertical feet below the base of the ski area before intersecting the highway.

“Gotta go now,” the boarders insist, “snow at the bottom will suck in an hour.”

“Right,” says the hitch-hiker and starts up the boot track leading to the apex of Cowboy Ridge. Soon we’re cutting turns through forgiving powder and the hitch-hiker is flying off boulders with the boarders. I keep my feet anchored in the white sea but I’m keeping up, feeling cool, feeling like one of the boys.

As we drop, stumps, rocks, saplings, and knee-deep cement all conspire to truly test skiing ability. The hitch-hiker wiggles smooth effortless turns through the mine field while I ricochet like a pinball between alternate hazards. Eventually, I’m sideslipping more than skiing. The boarders are long gone, but to his credit, the hitch-hiker stands by his dog. 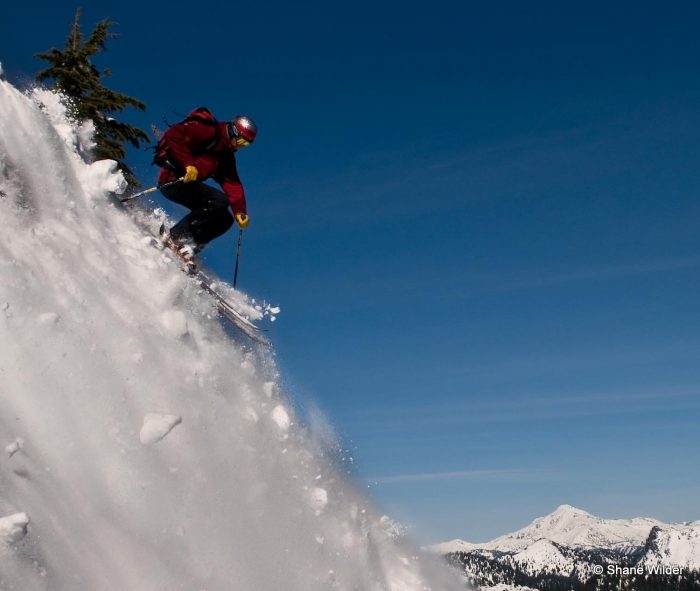 In the bed of  a friend’s pickup as we shuttle back to the ski area, the hitch-hiker asks, “Warmed up yet?”
I’m broiling in sweaty polypro. “Yeah.”
“Then let’s hit Highland Bowl before it catches much sun.”
We ride up Big Chief Mountain and hike east along a spur. My companion points out several lines as we walk. “Skied those trees before?” he asks.
“I have,” I tell him proudly.

“Yeah, everyone skis them. If you don’t get ’em first thing after a dump, they’re trashed.”

A ten-minute walk delivers us to a ridge crest harboring both north- and south-facing bowls. The hitch-hiker teeters at the top trying to decide which side to ski. The Wenatchee Bowl to the north offers far better snow, but my guide seems to be pondering difficulties I may be deficient to defy. He makes his decision and jumps onto the large south-facing slopes of the Highland Bowl and cuts effortless GS turns at mach speed. I follow and, without the distractions of rocks, stumps, and saplings, trace an exemplary sine wave through the white paste.

Below the bowl we enter old-growth forests and slalom around fat hemlock poles coated with green lichen. Airborne powder crystals from my guide’s contrail sting my face. Carving turns on a double fall line, we angle our way back into the ski area and hit a trail leading to the lifts. 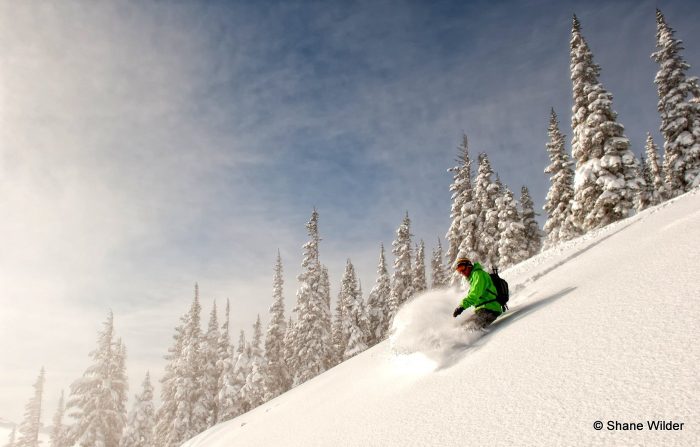 I suggest we replay that scene but the hitch-hiker has other ideas. From the top of the Tye Mill Chair we traverse out Tye Ridge. A few minutes of hiking and we’re looking down a northern chute loaded with thigh-deep fluff.

We hop in for what prove to be the best turns of the morning. Steep, deep and, when I bail to avoid planting my face on a tree trunk, cold. I want to return for a rematch–to ski it cleanly–but the master assassin is onto new kills I never knew existed.

At one vantage point he finally stops to identify three lines off the South Divide: Nasty Gash, C-Slit, and Quivering Thighs. He snickers over the intended sexual innuendo. “Those names aren’t PC anymore so prissies refer to them with names like ‘Rock Chute’,” he says, nearly vomiting on his words. “If it’s equality they want, let the ladies name a few of the neighboring chutes,” he continues.

“That one right there,” he says pointing to a narrow, sinister slash, “could be named after you, Little Willie.”

“How about a cruising run down the backside,” I say, yearning a few mindless turns where I am not on the edge of destruction and living up to my new moniker. “Then you can show me the glades down into Schim’s Meadows.”

The hitch-hiker agrees but can’t stick to the game plan. Partway down the planned run, the powder pulls his skis off- piste like a magnet. 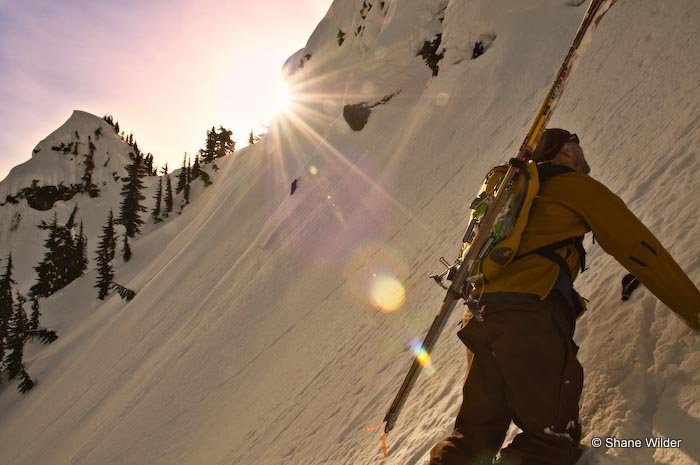 “Come over here,” he commands, breaking snow across a flat meadow.

The meadow looks large, and the promise of good skiing beyond seems small.

“Had the best single run of the season down the creek bed beyond these flats.”

I follow, not knowing what “best” means to this maniac.

The skiing is indeed superb–for a while. Moderate angle woods, hummocks, snowed-over logs, powder…ideal terrain and conditions for a hack. Suddenly, we pour over a roll and are funneled into a narrow creek bed. The snow on the north bank of the creek course is powdery; a body length away on the south bank it is sun crusted. I hit the sun crust and explode. I’ve just stopped tumbling when the hitch-hiker blasts by, covering me with the frozen dust levitating in his wake. He alternates between turns of powder and crust with all the concentration of a grandmother knitting by the television.

A few falls later I catch up to the model of patience. We ski down and are three minutes late in catching the last ride up the Southern Cross lift. We’ll have to scrap skiing the glades–the look I receive could melt this anchor into scrap iron. We are forced to ride the Jupiter Chair and from its top climb to reach the entrance to Nasty Gash.

The name of our night cap has me apprehensive and the look down its gullet doesn’t appease me. It’s narrow and steep; accelerating down this cyclotron on my back isn’t my idea of a good ending to a great day. 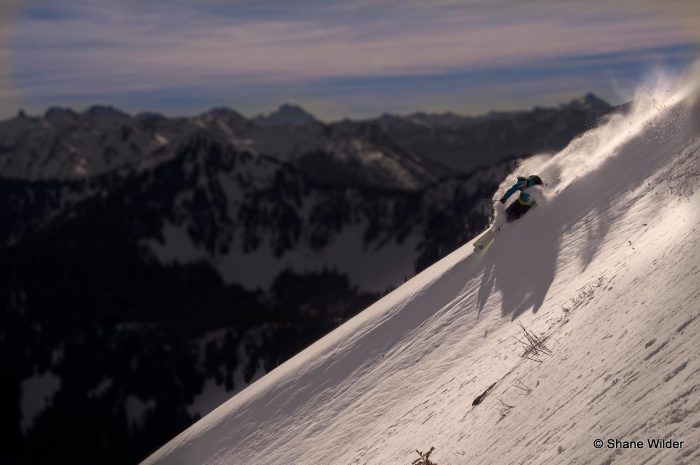 “I’m going around,” I tell my companion. “If you need a ride, meet me at the bottom.”

“Pick me up if you see me out on the road,” he says as he flies over the entrance band and drops like a stone through the gash. The boy paid a high price for his ride this morning; apparently he wants no more debts with me.

By the time I cruise down and hit the road, the hitch-hiker has vanished. But his mark hasn’t. I give the mountain a long look as I drive slowly past. I’m reminded of those pictorial illusions where the white space creates one image, the black space a completely different image. For the first time, I’m seeing beyond the white of the cut runs to the black of the trees. And for the first time in years, I can’t wait to ski Stevens again.

Night Skiing: 5 nights a week through most of the season with up to 6 lifts operating.

Lift Tickets. Adult day passes cost $67 (2017 prices) and allow you to ski from 9 a.m. to closing time (usually 10 p.m.). Most days from mid-December to mid-March, Stevens offers night skiing until 10 p.m. On non-holiday Mondays and Tuesdays lifts close at 4 p.m.

Access. Drive Highway 2 about a half hour west of Leavenworth to milepost 64.5. Park in the nearest available parking lot to the lifts. The mountain can be extraordinarily busy on weekends. On good-snow Saturdays and Sundays visitors are advised to arrive by 8:30 a.m. if they hope to park within walking distance of the lifts. If you can’t arrive early on weekends, consider arriving around 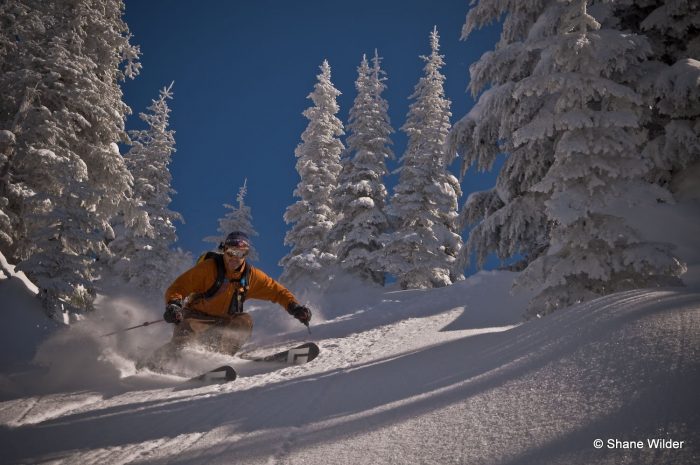 noon and getting a parking spot from a season’s pass holder who is just skiing the morning.

Note: This article was originally published in Powder Magazine in 1995. It has been updated and revised for use here.