Zambia is home to an experience on every whitewater kayaker’s dream list: the Zambezi River. As a natural border between Zambia and Zimbabwe, the Zambezi is one of the largest drainages in Africa and flows at an average of 125,000 cubic feet per second. To put that volume in perspective, envision a basketball as one cubic foot. Now picture 125,000 basketballs sweeping through a given point on the river every second.

The river is also prized by kayakers for its warm water, beautiful setting, plethora of accommodation options, organized shuttle services and an abundance of extracurricular activities.

Coming from the eastern cascades of Washington State, getting to Zambia is no simple task. This is especially true when you’re flying with a kayak and two weeks of paddling gear. Luckily, most airlines have plenty of information on their abilities to carry large sporting equipment on their websites.

In our case, I and my friends Jacob Peterson and Steve Bailey flew with Emirates out of Seattle. We chose Emirates because the airline counted a kayak as one of your two allotted checked bags if it 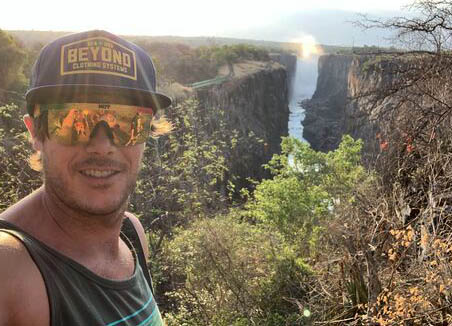 was smaller than 300 cm in volume.

The flight experience was a breeze, even though it took 45 hours to get from Seattle to Livingstone, Zambia. Our flight path took us directly over the North Pole and then south over Iceland and Europe to Dubai. After a relatively short layover, we boarded another Emirates Boeing 777 and continued to Johannesburg, South Africa. We enjoyed our first meal in Africa before eventually boarding our final flight to Livingstone with South African Air.

Upon landing in Livingstone, we got off the plane onto the tarmac, walked into the tiny airport  and swept through customs with our temporary visas in 10 minutes. As we rounded the corner to baggage claim, we were ecstatic to see three whitewater boats sitting in the oversized baggage area. We had made it. After exchanging some of our money to Kwacha, the Zambian currency, we exited the airport to find a flatbed truck with the name of our hostel hand-painted on the side. We loaded our boats and enjoyed a ten-minute ride to our new home for the next 12 days. 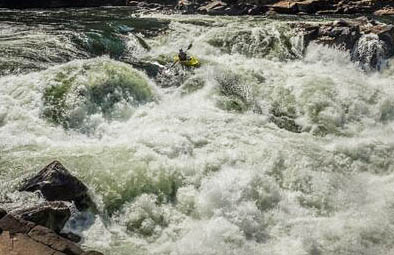 Victoria Falls, one of the seven wonders of the world, is about 100 meters upstream from the Boiling Pot, the popular put-in on the Zambian side of the river. We could see the mist and hear the roar of the falls as we made our way down to the water. The river sits about 200 meters down in the canyon, a serious hike with a kayak.

The Pot is actually a large, circular pool, with the first rapid of the canyon directly upstream. The rapids of the commercial section of the Zambezi River do have proper names but are more popularly known by numbers. From the base of Victoria Falls, there are 26 significant rapids spread out over roughly 25 miles of river.

The night of our arrival, we had met a crew of paddlers from New Zealand who had already been down the Zambezi a couple times and had a pretty good idea of the lines. They invited us to hop on their trip, and we had some new friends for our first descent.

As we arrived at the Victoria Falls Park, we were greeted by a crew of Africans who approached us and introduced themselves. Their job was to carry our kayaks down to the river for us. My porters name was Manyand, and he worked as my porter the whole trip. He was a great guy. As we walked down the seemingly endless trail to the river, my gratitude for my porter grew immensely, as did the butterflies in my stomach. Anytime I paddle a new river, especially big water rivers, there are always some nerves flying around inside me. Eventually we got to the river, soaked up the scenery for a minute, climbed into our kayaks, and started downstream with our 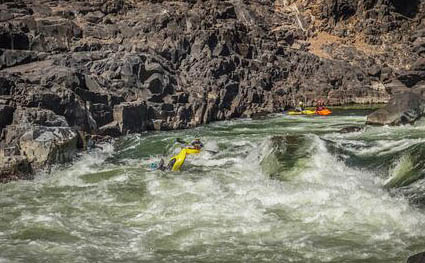 The whitewater of the Zambezi can be described this way: There is a ton of water doing a ton of things. Powerful eddies and whirlpool eddy lines are consistent throughout the whole river. All of the rapids are large and have unique characteristics. Most of the rapids have so much going on that you just have to paddle hard into them, react accordingly, and if you find yourself upside down, roll up when you get a chance. On our first run, I “Hail Mary’d” a lot of rapids. Some of the rapids that stood out for their difficulty or grandeur were #5, #7, #9, #11, and #18. Everything else dished out good lines, rowdy lines and scary lines at one point or another.

We quickly realized that we were immersed in a fun-loving community when we walked into Jolly Boy’s Backpackers Hostel when we arrived in Livingstone. This place had kayak racks in the 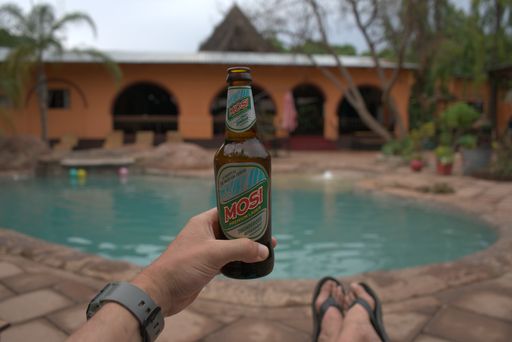 parking lot, a swimming pool, a full bar and plenty of interesting people. Within the first hour of being there, we were poolside with a bucket of Mosi’s, Zambia’s staple light beer.

A couple hours after our arrival, the paddlers started filing in after their day on the river. Turns out, if you are a kayaker, Jolly Boy’s is the place to stay. At one point during our trip, there were 26 whitewater kayakers representing 12 countries. Given that all these people were on a kayaking vacation, it was routine for everyone to get back to the hostel after a trip down the Zambezi and spend the rest of the evening telling stories of the day’s endeavors over several buckets of Mosi.

There are many hostels in Livingstone and they all have their own characteristics. They also all have their own events throughout the week. Victoria Falls Backpackers Hostel had karaoke on Thursday nights. College-age travelers who were simply checking off some bucket list travel usually occupied this place. Jolly Boy’s hosted a BBQ night every Tuesday that usually turned into a big pool party. Fawlty Towers Hostel was usually occupied by young professionals who may or may not paddle, and it was great place to seek out other paddlers who (probably) don’t have massive hangovers. Then there was Limpos Barber Shop. Limpos was the Wednesday night spot and the happening nightspot. It was basically a hip-hop dance club with a sports bar in one corner and an outside BBQ pit. Across the parking lot was an African-owned Mexican restaurant that featured live Mexican music performed by talented African musicians.

I had no idea when I would travel to Africa again, so we stayed busy checking off as many activities as possible. One of the most interesting, of course, was the African wild game safari.

A safari is simply an overland journey, typically done in a 4×4 vehicle, with the goal of seeing local wildlife. Between the two safaris, we spent more than 15 hours in open-sided Toyota Landcruisers, crossed national boarders into Botswana, slept in tents in the middle of Chobe National Park, and saw almost every exotic African animal you can imagine. It was a pretty incredible 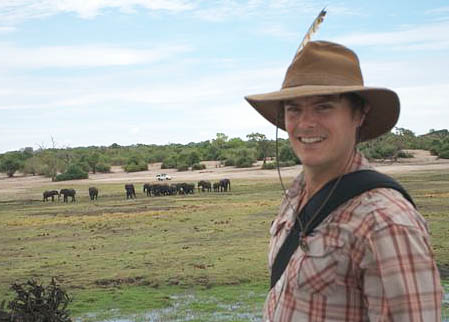 experience being so close to creatures that I’ve only seen on the Discovery Channel and “Planet Earth”. We witnessed lionesses feasting on baby elephant carcasses, giraffes nibbling away at Acacia trees, dazzles of zebra, elephants crossing bodies of water using their trunks as snorkels, and of course, more impalas than you could ever count. There is actually an acronym that is thrown around in the safari world, JAFI, or Just Another F*%#ing Impala.

During my time in Zambia, I spent a total of six days kayaking the Zambezi, three days on Safari, and a couple days resting and soaking up the Zambian culture. My skills and comfort level in high volume whitewater increased immensely through paddling the same 20-mile section of river and exploring my creativity with different lines. Even though I was feeling confident with my abilities to paddle every rapid with a clean line, I never had a day of paddling without flipping at least once. In fact, on our third day, I flipped at least 30 times between rapids 1 and 13. After the trip, I sat in the eddy at the take out waiting for my turn to climb out of the river, exhausted from the beating, I mumbled to myself, “Damn, I paddled like shit today.” An Austrian paddler named Simon quickly responded with, “T-Pot! Even though you paddled like shit today, you still kayaked the Zambezi River!” I guess I really had nothing to be upset about. The Zambezi is the most fun river I have ever kayaked.

If you ever need an adventure buddy, feel free to reach out! Tom’s email: tom.k.potter@gmail.com