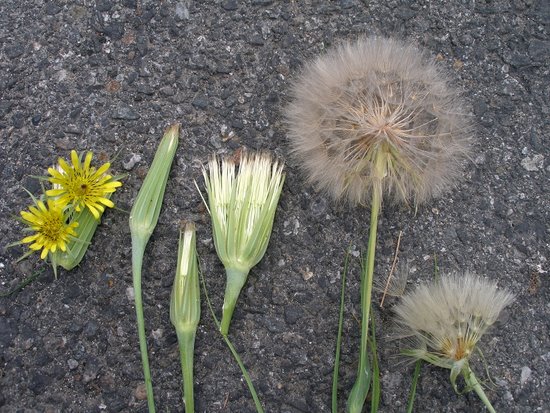 The flower, seed pod, and seed head of western salsify.

When it comes to invasive weeds, which is the worst of the worst? If the FBI, for example, had a ‘Most Wanted’ weed poster hanging in the Cashmere post office, which noxious weed would be their Number 1 Most Wanted? Or, by merit of badness being associated with toughness, which weed would be ‘Más Macho?’

In truth ‘El Que Es Más Macho’ is a highly localized call. Rainfall, temperatures, sunlight, soil type, and amount of disturbed soil all affect which weeds will have competitive advantage over other weeds and over native vegetation.

Top-dog weeds seem to pass through their own order of succession. Part of this pertains to human efforts and natural forces that knock back one weed when it gets too abundant, leaving the soil exposed and ready for the next opportunistic seed blowing by and sinking its taproot. My wife maintains that every year there seems to be a ‘new weed of favor.’ What she really means is there’s always a new weed of disfavor. 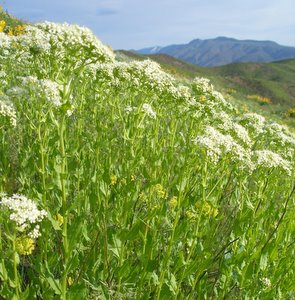 In the foothills bordering the Wenatchee River from Cashmere down to Wenatchee, different forms of knapweed were the scourge six or seven years ago. Knapweed is still alive and well but, through a combination of pulling, spraying, bugs, and goats, places that were once overrun are much improved.

The last three or four years whitetop has been the Big Ugly. It’s being spread by wind, animals, and humans at an alarming rate and it doesn’t need disturbed soil to sink its root, crowd out its neighbors, and create its own barrios. Once established into even a small patch, pulling whitetop seems ineffective because a small amount of missed root allows the plant to reestablish itself. Presently spraying appears to be the best technique for corralling the beast. 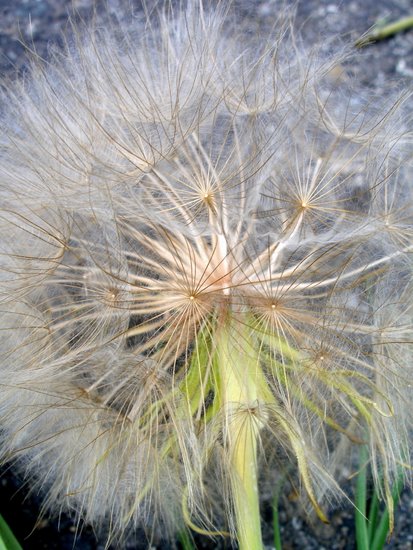 Who else is competing to be The Most Wanted? Over the last two years, western salsify has been flexing its muscles in the open spaces flanking the Wenatchee Valley. This year it appears to be going off big. Part of the bad news about this biennial is it’s appearance: There’s nothing thorny, spiky, or ugly that identifies western salsify as an undesirable. Quite to the contrary, in its first year the plant forms an attractive rosette of long, narrow leaves that look like blades of grass. The next year, one to ten flowers that are blazing yellow stars of color will form at the ends of the plant’s fleshy stems.  When those flowers go to seed, they form spectacular, dandelion-styled seed balls the size of a baseball. The seed heads are beautiful and you’re really tempted to blow those fluffy balls and send those little seeds, each with their own parachutes, on a journey.

More bad news. While considerable literature states that western salsify prefers disturbed soil, the plant is thriving in our foothills amid thick patches of native grass. Undisturbed soil doesn’t seem to be disturbing it at all. Also, pulling plants with closed pods whose flowers have started going to seed, does not prevent the seed pod from opening and the seeds from disbursing. So if you pull plants that have unopened pods, be sure to pluck, pocket, and dispose of those pods at home.

The good news about western salsify is that pulling it in its second year before it seeds is effective. Likewise harvesting and carrying away the unopened seed pods of a mature plant will literally nip the damage in the bud. Furthermore The Handbook of Edible Weeds (James Duke) says the plant is edible and that many people prefer the root of western salsify (aka goatsbeard) to larger, cultivated forms of salsify, like oyster plant. The peeled and boiled roots of all these plants supposedly taste like oysters. The book says the flowering stems and the flower buds can be cooked and eaten like asparagus. Young shoots, leaves, and roots can be diced and used in salads. Fully developed roots can be blanched, peeled, cooked and eaten. More uses of the plant are described in the book.

If many weed haters start pulling and eating this plant, the tenure of western salsify in the foothills may be short lived. 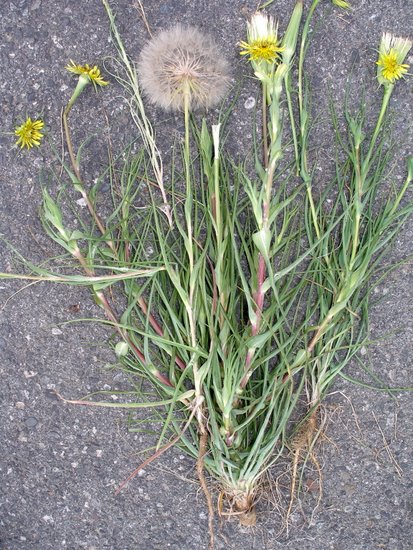 Note: Wikipedia has a different take on the deliciousness of the plant, stating, “Unlike some other species of salsify such as the oyster plant Tragopogon porrifolius, western salsify is not generally regarded as edible, though the root can be eaten (raw or cooked) and so can the young stems.”

Recently, we harvested some western salsify and experimented. First we ate the raw root and found it completely woody, fibrous, and tasteless—something Weight Watchers might promote as a pacifier that keeps the jaws busy while transporting nothing nutritional to the stomach. The root didn’t kill, hospitalize or even give us a stomach ache. We’ve also eaten the plant’s raw leaves, stems, and flowers. The lower stems are fibrous – maybe boiling would help them. The leaves, upper stems, and flower are bland and as good as the salad dressing you slather them in. A cup of salsify salad went down just fine and did not come back up in any unsavory manner.