It’s becoming that time of the year again friends. The warming weather may start bringing the critters out of their nesting areas. Be prepared, by studying up on the difference between bullsnakes and rattlesnakes below.

Lisa Robinson sent us some snake info and a question. We did a little research to answer her question.

Lisa writes: Not sure if it’s the run of hot weather or just our yard, but we’ve seen about 6-8 snakes the last couple of days… My husband said he saw two big and one small bull snakes and several rattlers. Which brings up a question: Is there any truth to the tale that having bull snakes keeps rattlers out of the area? Someone told me that there used to be lots of bull snakes [around the river trail] and when they freaked people out they were supposedly removed–and that’s why the rattlers have moved in. 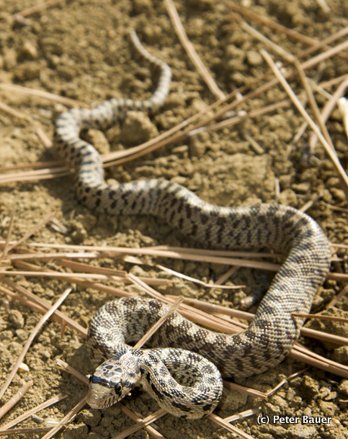 Bullsnakes have narrow, pointed tails and narrow heads with eyes farther to the side.

We’ll answer this question below, but first, a few notes on the differences between bullsnakes and rattlesnakes. The two are easily confused, often causing bullsnakes to unjustly suffer the lash from those who are rattler-phobics.

The two snakes also have distinct heads. Rattlesnakes have triangular heads that are wider than their body, while bullsnakes have narrow heads streamlined to their body. Bullsnakes have eyes on the side of their head with circular pupils. Rattlers have eyes that are more forward-facing and have slit-like pupils. 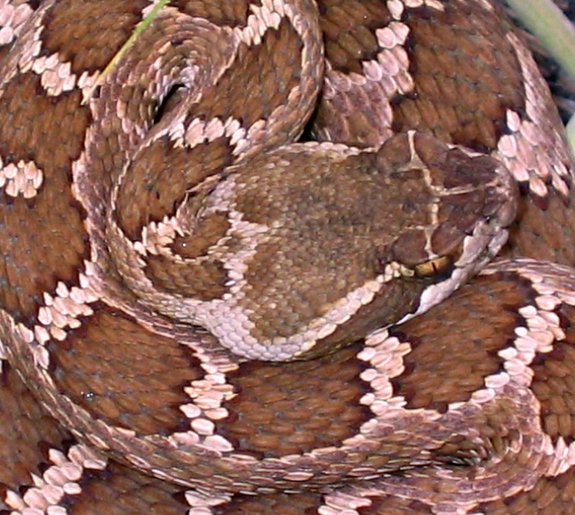 The head is well camouflaged in this photo but, when you find it, note its triangular shape and the vertical slit of the pupil. Of course if you’re scared of snakes you may have trouble getting close enough to look either snake in the eye.

Now, to answer Lisa’s question about whether bullsnakes keep rattlesnakes on the lam, we found this article from Denver zookeeper and rattlesnake researcher Bryon Shipley. In it, Bryon lays out and lays low some of the most common bullsnake myths: 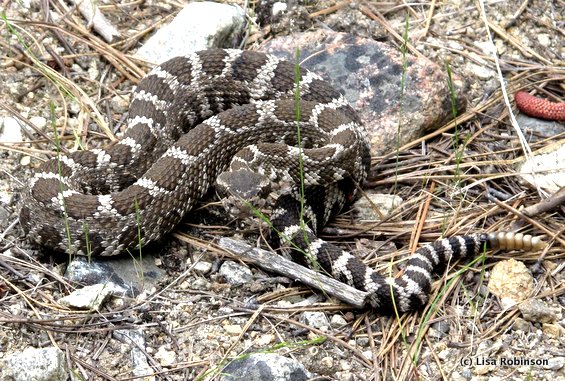 Bull or rattlesnake? Rattlesnake, with triangular head and forward-facing eyes. Venomous snakes bite 8,000 people in the U.S. annually, but only 10-15 of these bites are fatal. In other words, each American has a 0.0000048% chance of dying from snake bite. Still, if you’re bitten: immobilize the wound and seek immediate medical attention. 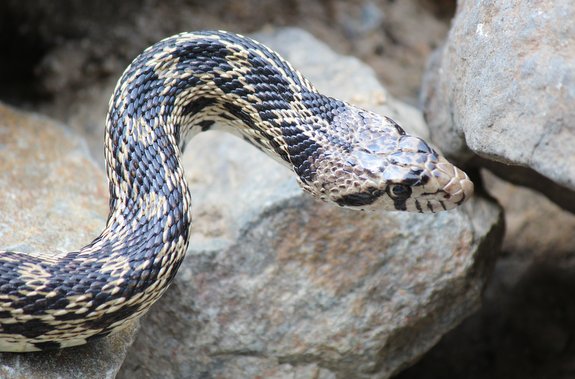 Photo from Lisa Robinson. Bull or rattlesnake? The eyes of this snake are on the side of the head and the pupils are very round. That makes it a bullsnake.

To learn more about the differences between bullsnakes and rattlesnakes, read Bryon Shipley’s entire article here. 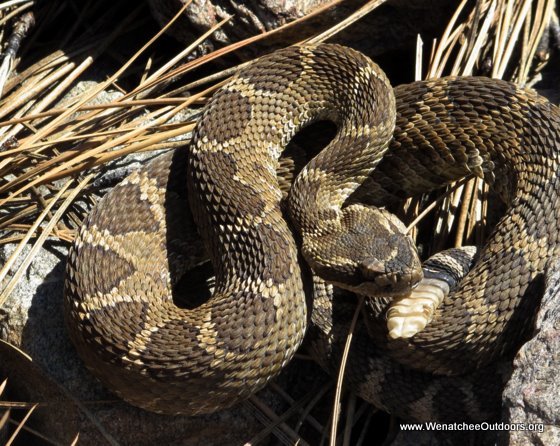 Bull or rattlesnake? If you don’t get this one: Go directly to jail. Do not pass ‘Go.’ Do not collect $200.