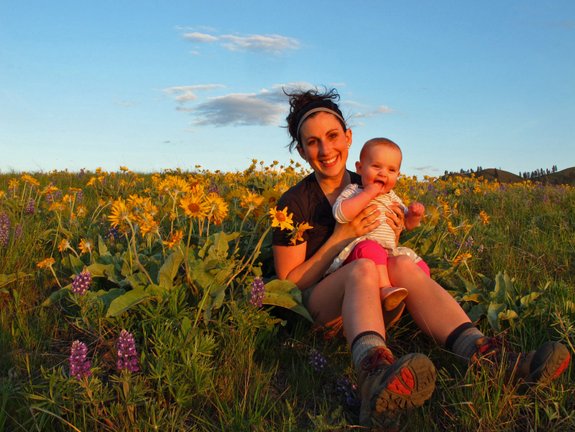 A Lifetime of Adventures
by Keri Davis

I used to think having kids meant game over. But then my daughter, Joanna, was born.

And while my husband and I have definitely toned down our adventuring, it hasn’t been as game-changing as I thought.  We are trying to find a balance of bringing her into our life rather than having everything revolve around her. At three weeks old we traveled from Wenatchee to Whidbey Island for an extended weekend.  September saw us visiting Lake Chelan often. In October I took her to Clara Lake to see the larches. This winter we snowshoed in what little snow we had.  There have been numerous walks along the Columbia River and through the cherry orchards we live in.  Short hikes up Saddle Rock, climbs above the fog at Eagle Rock, and chilly jaunts up Number 2 Canyon in 15 degree weather. I found that movement and being outside made my little sleep fighter a happier sleep fighter and gave me the outdoor exposure my soul craved.

While on a recent training run for the Horselake Half Marathon with my friend, Erin, we were marveling at the wildflowers. Even though we see them every year, it never gets old. The green hills of spring, purple spires of lupine, yellow balsamroot, white phlox, and the planet orbs of desert parsley seemed to overlap in abundance this year inspiring us to skip and giggle. Running through those meadows I knew I had to get back with my daughter before the sun turned things crispy.

My attempts at getting her to the foothills between working full time, other family plans, and naps, were unsuccessful for the first week and a half. Knowing I was working on a limited timeline and the understanding that the last warm day during the week ahead was coming, I settled on a Monday afternoon sunset jaunt.

The next day, my friend, Maura, Joanna, and I left the trailhead at Horselake and headed along the old road to get a better view of the western horizon.  The meadows were still full of flowers. Near 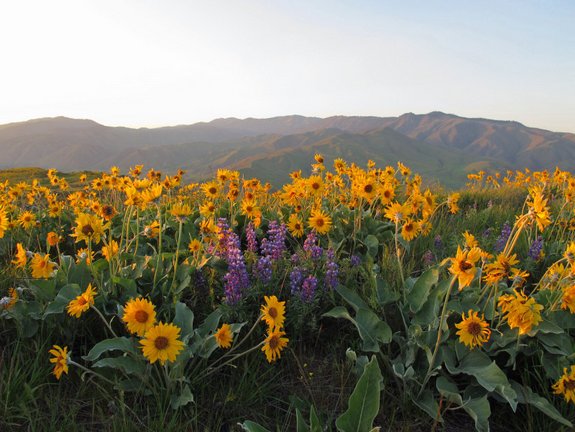 our stopping point, four deer were grazing. They didn’t seem to mind our company.  I took Joanna out of the pack and set her amongst the flowers – she all but disappeared below the flowers. We took some pictures and settled in to watch the sun dip down behind Mt Cashmere.

The sun never seems to move that fast until you watch it rise or set over the horizon. As we sat, I noted how quickly life has changed in the last eight months. Joanna won’t be able to remember any of these early trips that I have taken with her, but I’d like to believe her subconscious will. She sat perfectly still in the flowers with us, taking a break from trying to eat the balsamroot. I swear she was watching the sunset as well.

One of the great things I’ve learned from my daughter is to live in the moment and that moment was a special one.  I hope we’ll continue experiencing moments like this together throughout our lifetime together. Before she was born I was thinking I wanted to give this little girl a lifetime of adventures. It hasn’t taken me long to realize that it is she who is giving me the adventure.