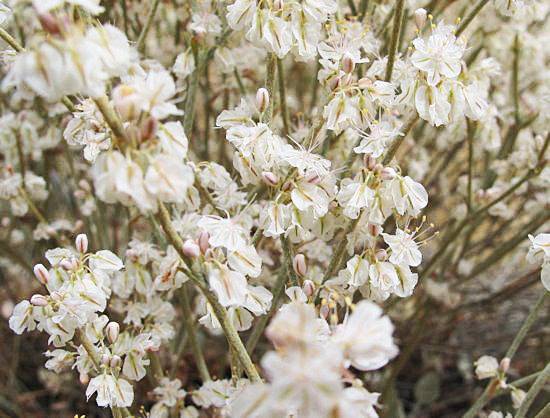 Close up of the delicate flower. Photo by WenOut.

Developing slowly in late summer and fully formed as Delicious apples are picked in the Wenatchee Valley, the peculiar flowers of the Snow Buckwheat might easily go unnoticed, but they are everywhere in the greater Wenatchee area.

Eriogonum is a large, diverse and widespread genus of semi-woody, long-lived perennials. The Snow Buckwheat is so named because the translucent flowers resemble fresh snow when backlit by the October sun. When viewed in conventional sunlight, however, the tiny (3/16”) flowers look like they might be the dried petals from last year’s crop.

Only upon close inspection will the subtle but beautiful colors and patterns of this unusual flower be revealed.

Eriogonum niveum is an extremely tough, drought-tolerant plant found in the same habitat as sagebrush. In the spring and early summer, the plants can be identified as 2- to 18-inch-wide by 6-inch-tall mats of tomentose, grayish-green simple leaves. As the dog days of summer wane, thin stalks slowly protrude from the center of the rosettes. At full development in late September, the loosely branched inflorescences will typically be about 18 inches tall. Mature flowers are usually off-white in color but some plants produce salmon or pink flowers.

Occurring from 500 to 5,000 feet, Snow Buckwheat tolerates extremes of temperature, skeletal soils on road cuts, and alkaline conditions. It develops a deep, woody taproot and is valuable for erosion control on disturbed or rocky ground. It can be purchased locally from Derby Canyon Natives.

Eriogonum is a fascinating genus with dozens of species growing between the Wenatchee Valley and the highest limit of plant life in the Cascade Range.

Additional information: From the Land Trust’s website and database of local plants. 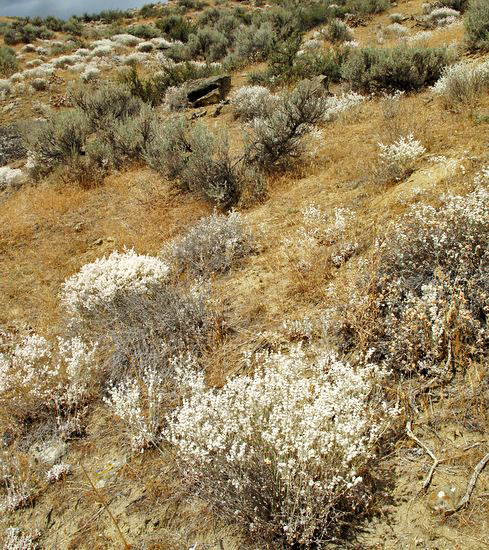 Snow Buckwheat blooming amidst the Sage. Photo by WenOut.

Meaning of Scientific name: ERIOGONUM: From the Greek erion (wool) and gonu (joint, knee), referring to the woolly joints of some of the species of the genus; NIVEUM: Snow white

Snow buckwheat is conspicuous because it flowers in late summer when other plants in its rocky habitat are dormant. Sometimes it grows so abundantly that the landscape appears dusted with snow. Snow buckwheat grows in clumps up to sixteen inches tall and wide. The crown gives rise to numerous short woody stems. Leaves attached to the main stems are short (less than three inches long) and generally oblong. The undersides of the leaves are gray and very “woolly” while the tops are only slightly hairy. The flowering stems are also woolly. The flowers are white or light pink and turn brown at seed maturity in the fall.