Eight weeks ago, I ruptured my plantar fascia (the flat band of tissue, or ligament, which runs from the back of the heel and fans out to the toes). I had plantar fasciitis and decided to go to a trampoline park anyway. Be ye not so stupid! As I made a big jump into a foam pit, I heard a loud POP! For a split second, I thought it was the trampoline, but then I felt the searing pain in my right heel.

A ruptured plantar fascia is a painful injury that requires a substantial recovery time (depends on the severity, but I was told around three months for a full recovery) and there’s not much that can be done to fix it. You get some crutches, put on a boot to immobilize the foot, and wait. And wait. And then wait some more. 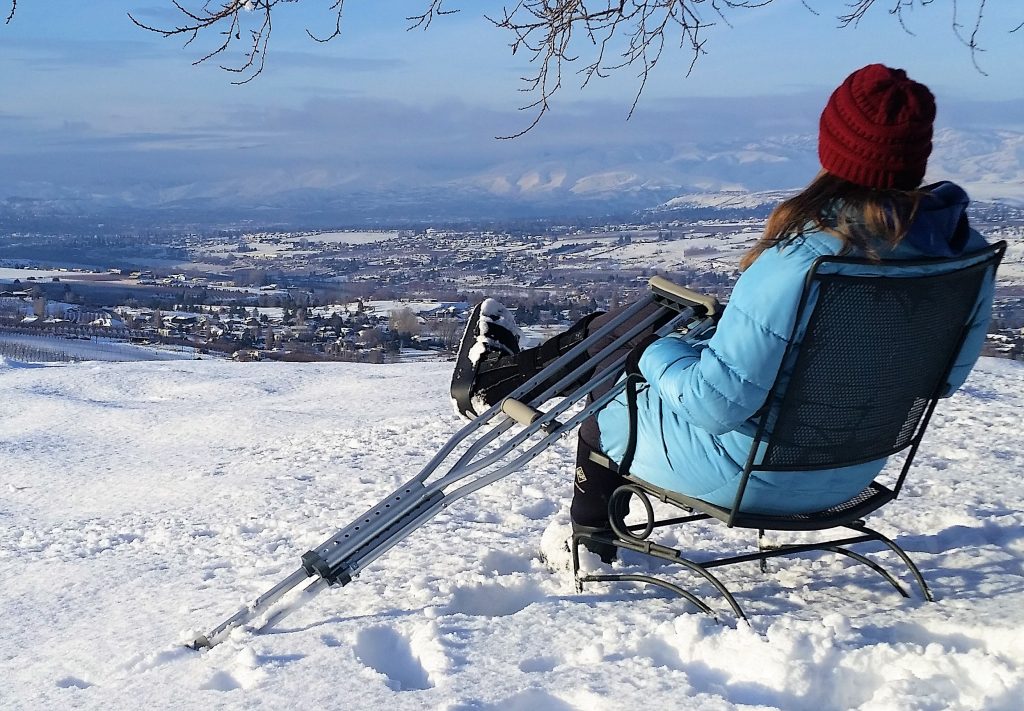 Bundled up and enjoying the view

Being patient is not in my wheelhouse. Neither is being still. To add insult to injury, my “good” leg is most likely getting a knee replacement this spring. So, the leg that was called upon to carry all of my weight post-injury has merely been along for the ride for several years, contributing absolutely nothing to my quest for forward motion. What’s the worst that can happen? Spoiler alert: more damage to the knee, and much wailing and gnashing of teeth.

I’ve also missed out on the beginning of the ski season and I most likely won’t be able to ski much during our big once-in-a-lifetime family ski trip to Austria (with immediate access to seven amazing ski areas).

I’d love to tell you that I reacted to all of this with patience, grace, and serene acceptance. Not entirely. My husband may have had to repair my crutch with hose clamps after I slammed it down in frustration and broke the plastic bracing early on in my recovery. Oops. But I have since learned to maintain some level of fitness and sanity while struck down by injury. Here’s how:

There’s an app for that
I’m not super into apps, workout videos, gyms, and all of that – I’d much rather be outside playing. But due to my injury, workout apps have recently become a regular part of my daily routine. After downloading a handful of free apps onto my phone, I was able to try them all out and settled on a daily abs workout that rotated through different exercises each day, and a similar upper body app that I tried to use several times a week. If nothing else, it made me feel as though I was at least making an effort.

I started tracking my progress
When I’m not able to get my usual outdoor exercise, I find tracking my steps to be a good indicator of whether or not I’m becoming more mobile each week. I let pain guide my activity instead of having a set goal in mind, and the visible progress (in the form of an increased average of steps each week) was encouraging when I got frustrated with my lack of mobility. 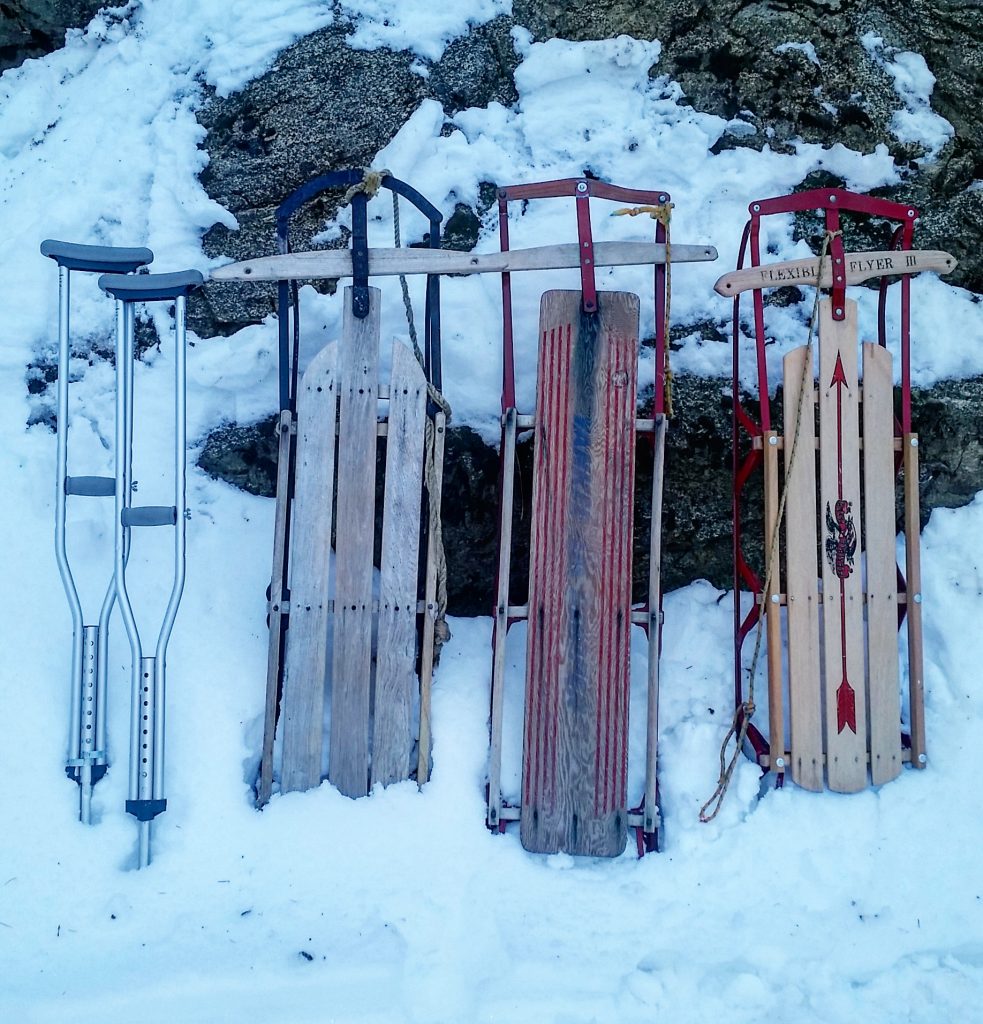 Because all good stories start with, “here, hold my crutches.”

I found activities I could modify
When all else fails (especially on the lower body) go swimming. I find swimming laps to be immensely meditative and a great workout, but never quite get around to it when I’m healthy. This injury gave me the push needed to get back into the pool. And because all good stories start with, “here, hold my crutches,” I figured out how to go sledding (borrow a side-by-side RZR for rides back up the hill), play on playground zip lines, and other ill-advised activities.

I planned future activities
Just because I can’t do anything now doesn’t mean I can’t plan ahead for future fun. I took some time to write down my fitness and adventure goals for the rest of the year. If all goes well, I will cram so much awesome into the rest of my year that this period of inactivity will be a mere blip in my rearview mirror.

I got outside
I firmly believe that fresh air and exercise can cure almost anything. I bundled up and sat on our deck or out in the yard just enjoying the view. As I became more mobile, I paced the driveway, first on crutches and then in my boot. Did I look ridiculous? Yes. But being stuck inside all day was a worse option. So, I did whatever it took to get me moving while outside.

I celebrated the milestones
I celebrated downsizing to one crutch, showering without crying, driving for the first time, making it to the bus stop, putting the crutches back into storage, and any other perceived improvement. I was not above sending my husband and friends texts that read things like, “I walked to the bathroom and back!! Well, kind of. I was totally limping and it was painful and was probably a bad idea….but I moved from point A to point B WITHOUT CRUTCHES. So I’m obviously practically healed,” and they would all respond with lectures and eye-rolling emojis.

I distracted myself with other hobbies
I dusted off the guitar and brought our keyboard out to the living room. I’ve always wanted to learn Mozart’s “Turkish March” on the piano and made some progress while stuck on the couch. We went on family drives exploring areas we’d always been curious about. I read a lot articles about other people doing super fun activities and lived vicariously through my friends’ adventures.

The end result is that I’m not entirely squishy after eight weeks of recovery and I haven’t murdered anyone. I count that as a victory!

How do you maintain sanity and fitness when you’ve sustained an injury?