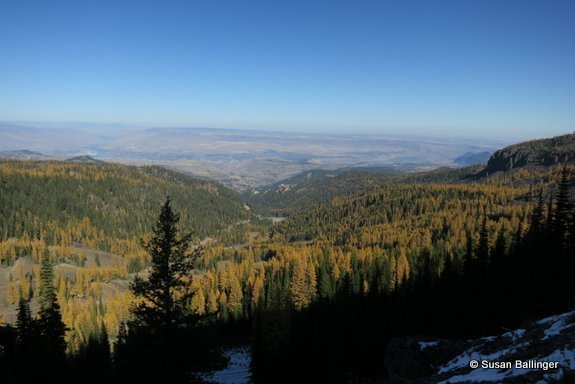 Western larch, a deciduous conifer, glowing amongst the normal conifers in the Wenatchee National Forest.

Low-angled, fleeting October sunshine sharpens the fall foliage display of our native deciduous shrubs and trees. My favorite tree this time of year is the larch, a species that breaks the rule that says a conifer tree must have evergreen needles. Larch needles turn a golden orange in October, lighting up the mountainside with a shimmering glow. Come November, the ground below a larch is carpeted with soft brown needles and the tree’s bare branches make the tree look dead. In the Cascades and the greater Pacific Northwest, we have two native species: western larch (Larix occidentalis) and alpine larch (Larix lyallii).  Some people call larch a “tamarack,” which is the name of the third North American species (Larix laricina) that doesn’t overlap its range with our two. Tamaracks grow coast-to-coast across Canada and in the northern US from Minnesota to Maine. 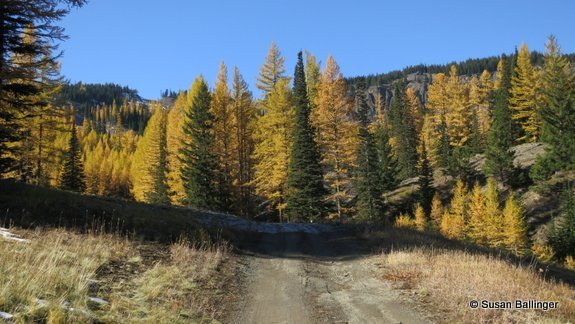 Grove of western larch partway up the service road at Mission Ski Area.

In our area, you can use elevation as your guide to figure out which larch species you see:  western larch is found below 5,500 feet and alpine larch above 5,500 feet. Look for western larch as you drive over Blewitt Pass, drive to Mission Ridge Ski Area, hike to Clara Lake, or drive along the upper Icicle River Road.

To see alpine larch up close, you’ll need to climb up a steep trail. Alpine larch cling to the rocky north-facing side of Icicle Ridge, grow in tight groves throughout the Enchantment basin, and flag high ridges for a 120-mile stretch from the Wenatchee Mountains north to Canada.

All Larix produce tufts of fine, soft green needles on the end of stubby wood shoots that line a branch. The single-season larch needles lack a waxy coating and by being short and small, have a comparatively large surface area to collect sunshine that powers photosynthesis. Other conifers like pine, fir, and spruce have long-lived needles that are coated in wax that helps to minimize water loss from the tree. Compared to all other evergreen conifers, larches are more efficient at photosynthesis, but that means they do use more water and require full sun to maximize food production. This efficiency allows larch trees to be leaf-less all winter, yet still able to thrive alongside their evergreen conifer neighbors in the forest. 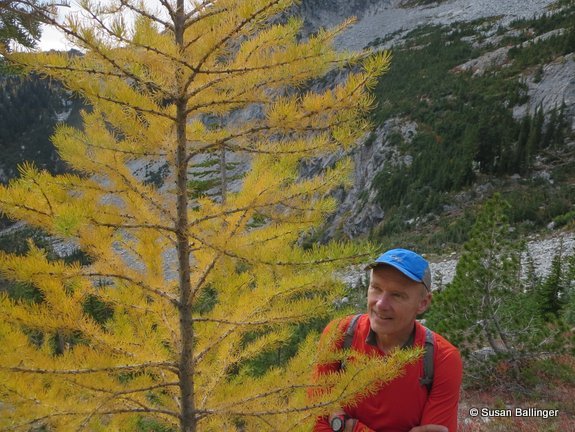 Paul Ballinger admires an alpine larch in full fall color. This photo was taken 6,700 feet on Icicle Ridge, at the top of Chatter Creek Trail.

Western larch grow tall and straight, with a high open canopy. Like ponderosa pine, mature western larch have thick bark that is deeply furrowed and fluted, creating effective insulation against the heat of a wildfire.  Alpine larch  are smaller, but are usually the largest conifer growing at timberline, with gangly spreading limbs and often, a weather battered top. Alpine larch occupy sites that are too cold, too snowy, too rocky, or too boggy for conifers to grow. A survival strategy for young saplings is to have some specialized over-wintering evergreen needles on low branches that live all winter, joined by the regular needles that bud out in early June when the snowpack is still deep.

October’s golden larch trees provide us a lesson in tenacity. Their lovely orange glow shows us how to persevere under difficult situations, as we all head into a darker, colder season. 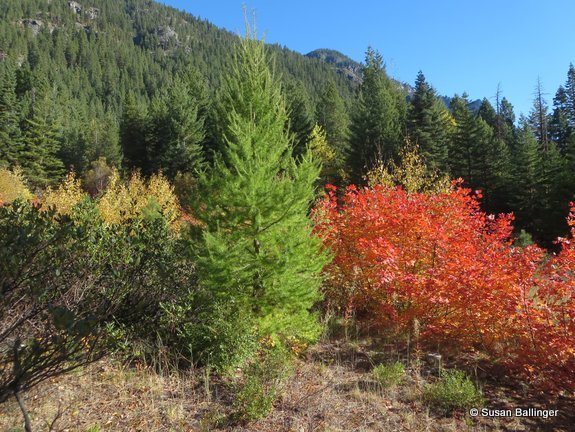 A young western larch is beginning to turn yellow in early October. The photo was taken at the Chatter Creek trailhead, elevation 2,623 feet, along the Icicle River.

It’s hard to get enough of larches when they hit peak gold. Below are additional pictures of alpine larches taken in the Enchantment Lakes Basin. 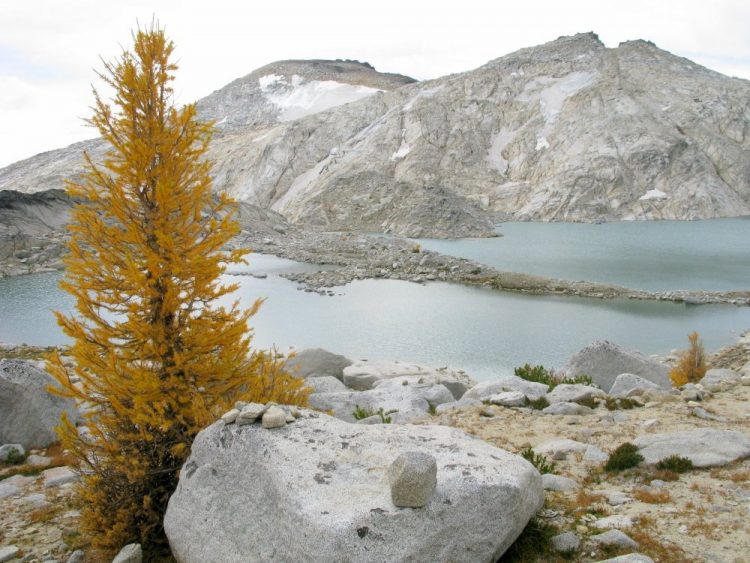