The Loop is Wenatchee’s most famous hike/bike trail. Along the western bank of Wenatchee’s riverfront, the paved trail follows a series of riverside parks along the Columbia River. Next, the trail crosses the Odabashian Bridge (Highway 97) on the northside of town. Then it follows the much wilder waterfront of East Wenatchee before recrossing the Columbia on the Pedestrian Bridge (the first bridge spanning the Columbia built back in 1908) and returns to the starting point. A few paved bike trails also connect to the Loop — on the east side of the pedestrian bridge you can follow a paved trail from the Loop 2.2 miles down the Columbia to Hydro Park. And as of 2014-15 you’ll be able to follow another paved spur leading from the east side of the Loop Trail at the Odabashian Bridge about 5.5 miles up the Columbia to Lincoln Rock State Park.

Map: View our topo map. Note: use ‘Print Preview’ before printing to properly scale this map to a full sheet of paper. Trip Instructions:  Once on the trail, go left or go right. Go far enough (10.5 miles) and you’ll complete a circle that ends where you started. Alternately, head out in one direction as long as time or energy allows; then turn around.
— Note 1: There is a nice paved extension to the Loop leading from the east side of the Pedestrian Bridge to Kirby Billingsley Hydro Park, which is downstream of East Wenatchee. One-way distance to Hydro Park: 2.2 miles.
–Note 2: As of 2014-15 you’ll be able to follow another paved spur called the Rocky Reach Trail leading from the east side of the Loop Trail at the Odabashian Bridge past the Rocky Reach Dam  to Lincoln Rock State Park. One way distance from the Loop to the state park: 5.5 miles. More Info:  Click here for information about parks and sites found along this 10.5-mile, circular, paved trail giving a riverside view of both Wenatchee and East Wenatchee.

The city of Wenatchee now offers access to local biking suggestions, both on and off road, in their new app, “My City Bikes Wenatchee”. The app can be found in your phone’s app store.

The Chelan County PUD maintains much of the west side of the loop. Here’s an excellent schematic map posted at their website. And here’s info showing a schematic map of the amenities found at Kirby Billingsley Hydro Park.

The Complete the Loop Coalition (CTLC) has worked diligently to make this riverfront loop a reality. The CTLC was also responsible for helping pave the trail to Hydro Park, and for conceptualizing and completing the Rocky Reach Trail.

More Info: This compilation from Gene’s BMX has history about The Loop, photo galleries, links to other sources of information, and the best hyper-linked listing of news stories written about the Loop, the Hydro Park Extention, and the Rocky Reach Trail.

Leave It Better Than You Found It: This should be every outdoor user’s goal. Pick up trash left by others, pull noxious weeds along your route, disperse old fire rings (they encourage more fires), throw branches over spur trails and spurs between switchbacks (make it harder to do the wrong thing than the right thing).

Important Disclaimer:  Treat this information as recommendations, not gospel. Things change, conditions change, and those contributing these reports are volunteers–they may make mistakes, fail to give complete information, or may not know all the issues affecting a route. So forget about finger pointing: If things go wrong, you are completely responsible for yourself and your actions. If you can’t live with that, you are prohibited from using our information. This guide is sponsored by the Brosi Family who owns and operates Momma Crow Farm. Located just outside of East Wenatchee, where they grow vegetables and flowers for their CSA (Community Supported Agriculture) and the Wenatchee Farmer’s Market.

“Since we have kids, this trail is important because it’s accessible to all ages and abilities. One of our favorite things to do here is to search for waterfowl on the Columbia River with our kids; this trail offers a number of excellent vantage points. We also like to ride bikes and use the play structure at Walla Walla Park.” 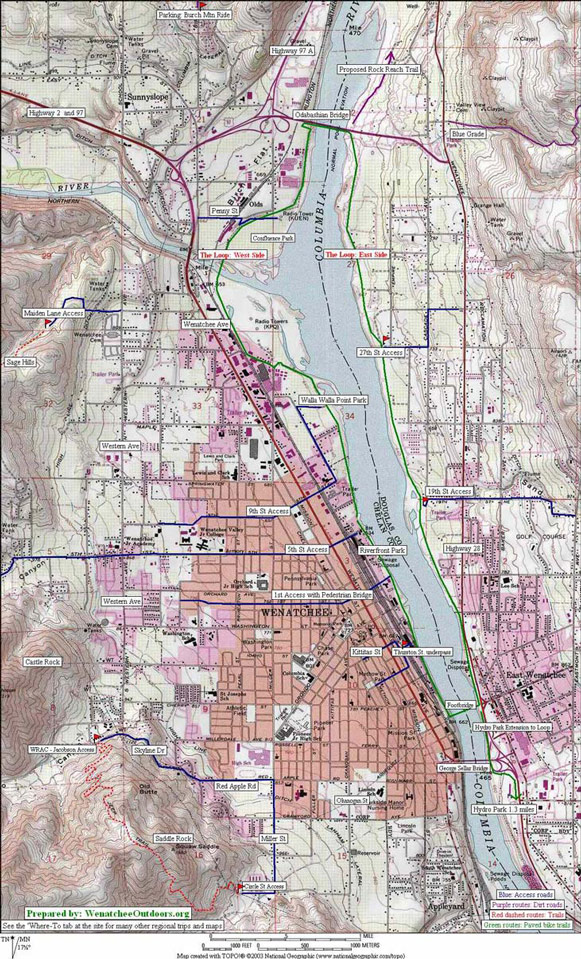