The Dakobed Redemption Tour (DRT)
Adam Vognild
Last year Trevor Kostanich, two of his friends, and I traveled for eight days from Holden Village to Darrington on skis. We didn’t have particularly good weather — the camera only came out sporadically even though the maps showed we were traveling through spectacular terrain. On day four, we wanted to ski off Chiwawa Mountain towards Fortress Mountain and then to Buck Creek Pass. We climbed into a cloud on Chiwawa and, from what we thought was the top of the peak, skied off the wrong side. This blunder changed the route we ultimately traveled and had haunted us ever since.

This past week Trevor had been studying the weather and thought we had the window needed to go back and complete the portion of the route we botched last year. Then new snow rolled in on Thursday and 3” of water equivalency dumped on parts of the cascades. NWAC issued a rare spring avalanche bulletin for the mountains we wanted to travel. So … another trip was hatched. Instead of redeeming ourselves on the last half of last year’s tour we decided to ski the Dakobed Traverse, following the White River Trail beyond Lake Wenatchee, generally following trails up to Boulder Pass, and then traveling cross-country from Boulder Pass to the Honeycomb Glacier on the flanks of Glacier Peak. The route would lead us safely to higher ground and let us evaluate stability before we committed to steeper slopes that might be slide prone.

The next day we woke at 5 a.m. to the blue skies that had been forecasted. The morning started out with Trevor putting me on belay as I kicked a cornice off so we could assess the slopes below camp. After a few stomps a huge chunk fell, and slid downward without precipitating bigger slides. The slopes seemed stable. We dropped over for a few turns; then the skins went back on the skis for more climbing. Soon we were on the Walrus (or Clark) Glacier looking over our shoulders at terrain we’d traveled a year before, but hadn’t really seen from inside all those clouds.

From the east shoulder of Clark, we dropped our overnight gear and slid out onto the mountain’s south slopes. Skiing off the top of this slope was, by itself, enough to call our trip a success. With perfect weather, however, this was just the start of the good things to come. We traversed onward and were soon at the base of Luahna Peak. We dropped backs for a quick boot to the top. The ski down from the summit was steep by my standards but, without the pack, it went well.

After picking up the packs again, we dropped onto the Pilz Glacier and enjoyed more steep turns on wind-buffed powder. Next stop was the Butterfly Glacier where we enjoyed a May rarity, spectacular powder turns. We set up camp below Neyah Point at 8000 feet where the views were incredible in both directions. We were buzzing from an incredible day and hatched plans for Monday based on the snow quality we’d seen. Tenpeak Couloir was the plan.

Monday we left camp and quickly found ourselves carving 1800’ of awesome powder as we descended the Moth Glacier. What a way to start the day. Soon the skins were back on and we began to traverse under the north side of Ten Peak Mountain. The snow was punchy under the couloir and we didn’t think it would be good skiing. So we changed plans and set our sites’ on skiing Glacier Peak, an objective we hadn’t really thought we’d have time to do. We quickly climbed onto the Honeycomb Glacier and dropped our overnight gear. We melted snow, drank and ate for over an hour. We left our gear around 12:30 p.m.

The terrain on the Suiattle and Cool glaciers was perfect skinning terrain, gentle and rolling. It allowed us to gawk as we steadily worked our way up. Again, we looked over to the east at the terrain we had traveled a year before and smiled seeing how impressive it really was. Around 5:15 p.m. we summited Glacier Peak, having kept skis on the entire climb. We sat on top absorbing our surroundings and the 360-degree view of blue skies, black spires, and white snowfields. Ever so slightly better than the views was the long downhill run through nearly perfect corn snow leading back to camp at 7,300 feet. How amazing to have such scenery, slopes, and snow all to ourselves.

Our final day, we dropped out of the high country by descending Lightening Creek. Down in the deep valley and eventually in the dark forests of the White River, we slogged back to the truck. It was a full day of travel that returned us to the truck around 5 p.m.. Fatigue, exhilaration, redemption were all intermixed as we drove out of the mountains. Our bodies ached but our tails were wagging.

Trip Instructions. From the end of the road, follow the trail along the White River north for about 4 miles. At Boulder Creek, head east and then north up the drainage to Boulder Pass. From here follow our topographic maps which show the route Adam travelled. 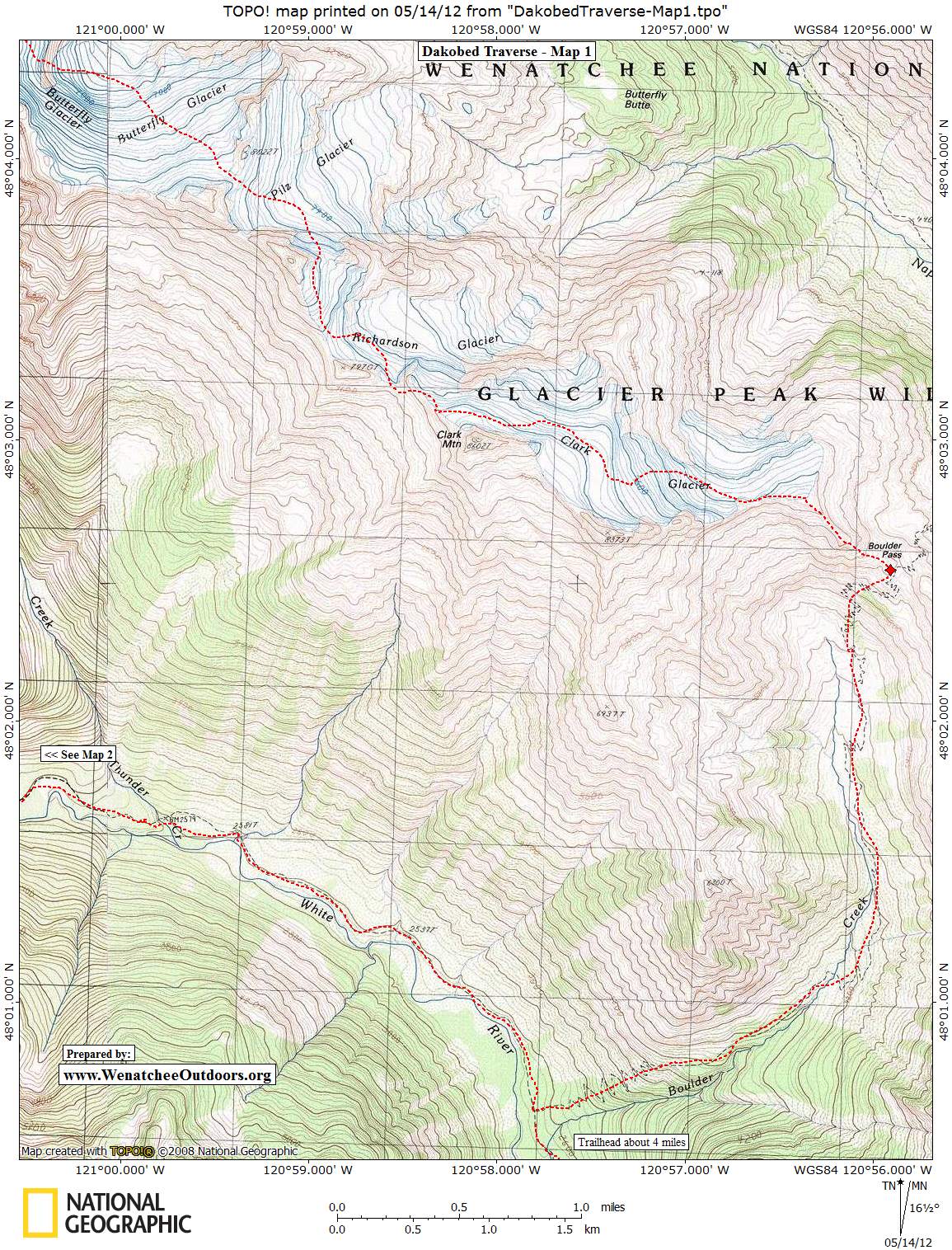 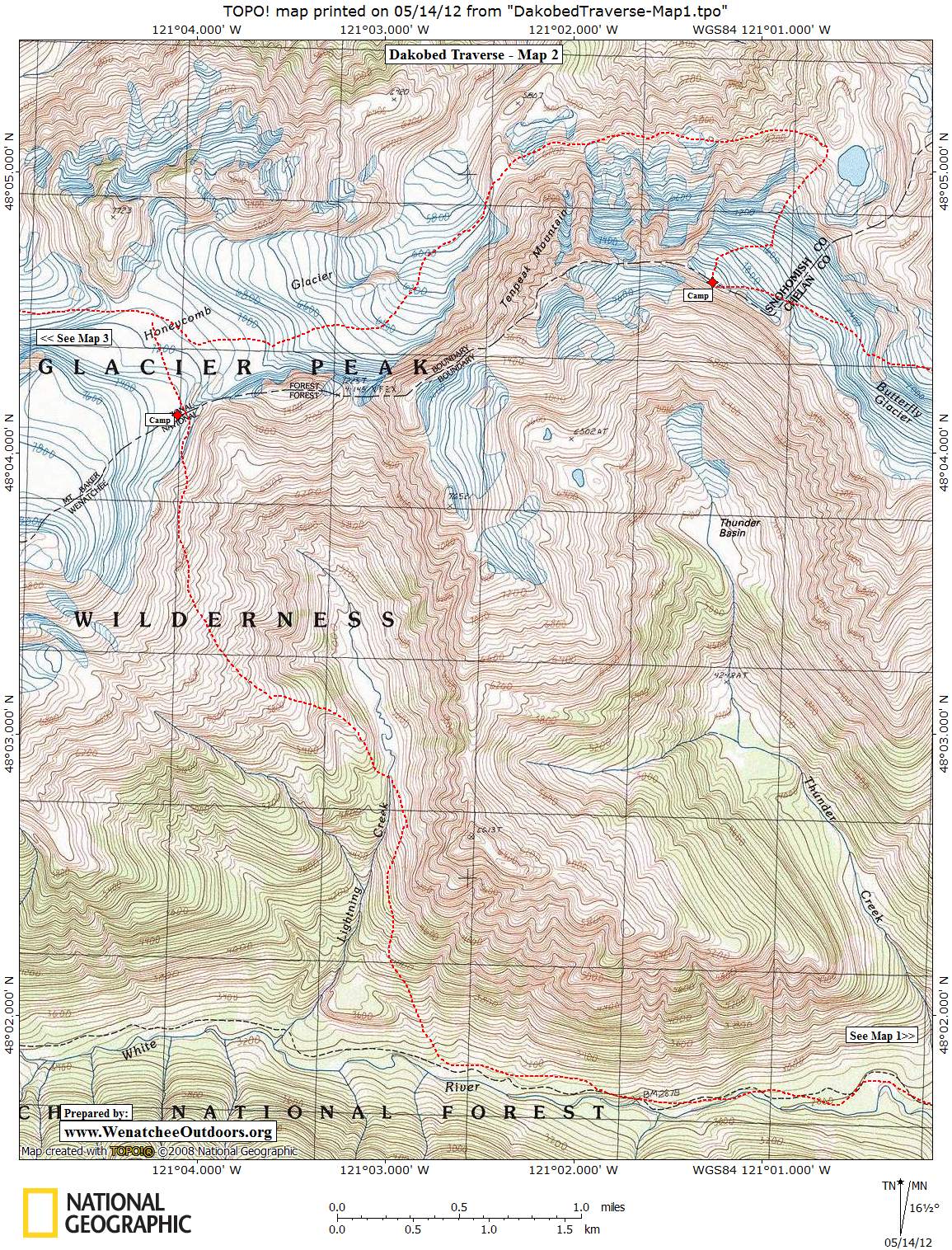 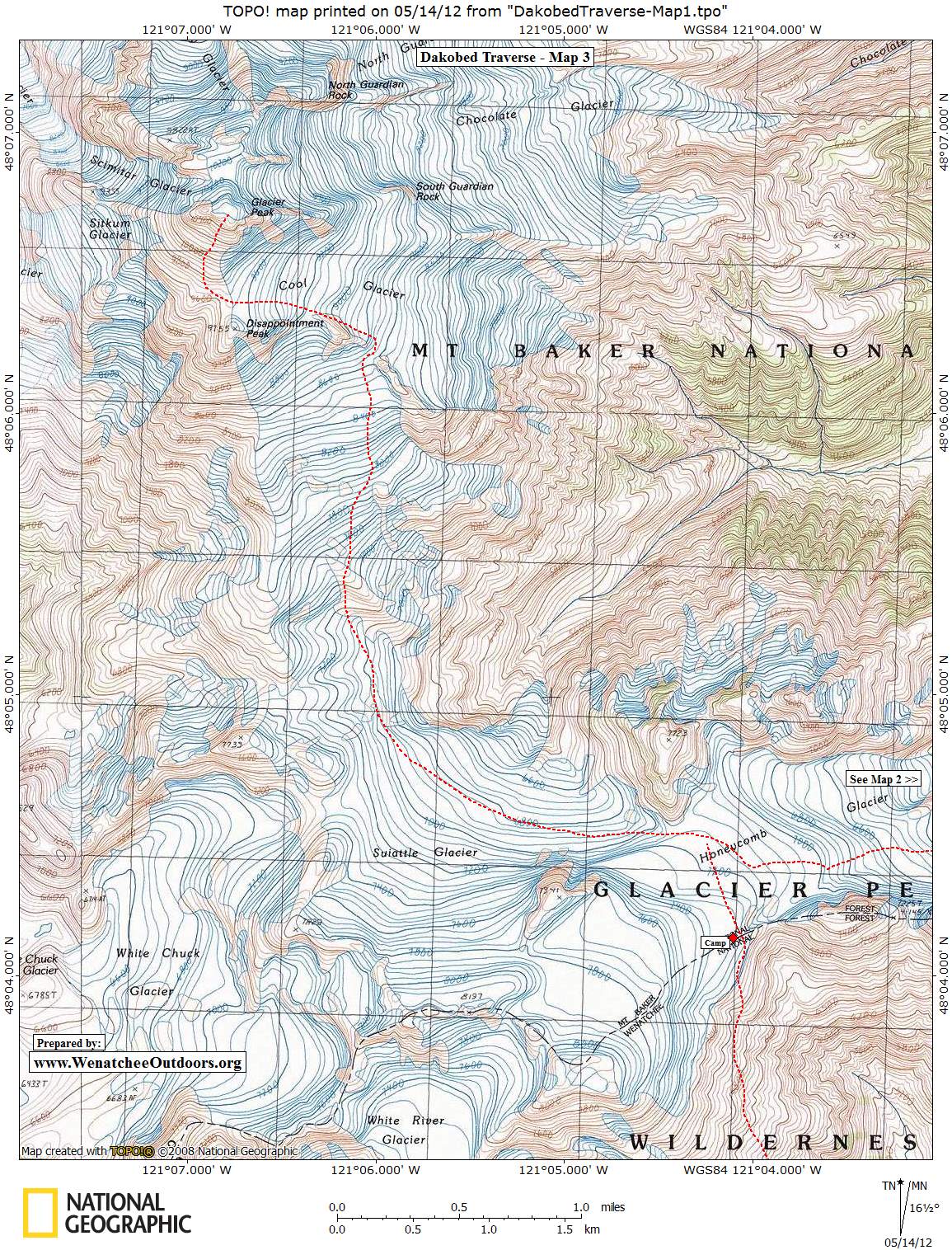