Photo: Richard Talbot and Steph Jones appreciating the snowy crest of the Cascades.

There’s so much snow!” they exclaim, their British accents oddly punctuating an observation many make at this point. We’re approaching Stevens Pass at 60 miles per hour and, over the past seven miles, the snowbanks flanking the highway have sprouted from hip height to hoop* height (*as in B-Ball).  That amount of snow is stretching the believability quotient of Richard Talbot and Steph Jones who are visiting Plain for a combination of pleasure and business, which in its own way (who comes to Plain??) also stretches the believability quotient. Photo: Why do you say this is a lot of snow??

At Stevens Pass, we skin up the snowed-over road leading to the radio tower near Skyline Lake. Beyond the lake, we travel in a northwesterly direction to a nearby pass, cross into a tributary of Nason Creek, and climb again toward the 5,476-foot summit of Tye Peak, a rather nothing peak with a very something view.

The clouds cooperate momentarily on the summit, delivering grudging views of Mount Stuart to the southeast and of Rock Mountain to the northeast. The sky is gray and the surrounding craggy peaks are plastered with ‘snice’ – that unique concoction of snow-injected ice. As we drop off the SE side of Tye Peak and descend the feeder stream leading to Nason Creek, our companions marvel over another quality of Northwestern skiing: “You have so many trees.” Photo: What am I supposed to do with all these annoying sticks?

Skiing, obviously, isn’t a natural part of British outdoor life. Rock climbing, hill walking, yes. Ice climbing in Scotland, perhaps. “Those of us in England who ski,” says Richard, “are typically mountaineers who got tired of alpine climbing.”

Now Richard and Steph visit the mountains of Austria, Germany, Switzerland, and France on skis to mix things up. The Euro ski touring terrain, however, is almost exclusively above timberline. It’s barren and lifeless. Having woody matter – big old-growth woody matter at that – adds a new dimension to skiing that challenges their intermediate skills. At times it’s a challenge too much and the Brits burrow into the soft snow rather than risk a hard encounter with cellulose. Photo: I say, is it proper technique to stick out one’s tongue, Old Boy?

This is how they become familiar with yet more Northwestern mysteries. What sorcery, they want to know, can transform snow that is fluffy to ski into white cement that anchors boards and limbs in impossible contorted positions immediately following a fall? Sometimes they struggle like antelopes locked in the claws of lions to free themselves. Yet with stiff upper lips and dry senses of humor, they still seem to enjoy themselves here in the great Northwet.

Yet we’re not completely sure. At the end of the day we drive Highway 2 toward Leavenworth and the combination of lost elevation and eastward migration whittles the snowbanks in reverse from hoop to hip height. Eventually we pop the question, “What’s your take on Northwestern ski touring now?” The Brits are tired and they’re not of the American persuasion to blather more than necessary. “So many trees. So much snow,” Steph says in a six-word summary of our six-hour day.

We wait. Surely with the awkward silence we give them they’ll fill in the dead space with more details.  Was it fun, did they find it hideous, are they excited for more bark-eating encounters, do they have enemies they’d like to bury in our white cement, do they ever plan to come back to this spongy bad country, were they awed by the monster trees in the green cathedral?

Finally Richard pipes in to qualify and elaborate upon his girlfriend’s summary. “So many trees and so much wet snow,” he says. Photo: Tye Peak, a rather nothing peak with a very something view.

Tye Peak sits smack dab on the Cascade Crest. The border of King and Chelan counties run across its top, as does the boundary between the Wenatchee and Baker-Snoqualmie national forests. Take a wide stance on the summit and feel yourself in two different counties and two different forests all at once. Trippy! Here on the Cascade Crest, geography accounts for the peak’s massive snowfalls, maritime temperatures, and monster trees. Access. Drive Highway 2 to Stevens Pass and park in the lot on the north side of the highway. If it’s a weekend, take one of the easternmost stalls (farthest from the ski lifts). Downhill skiers pay for the plowing, so give them the courtesy of parking closer to the lifts.

Map. See our topo map of this route below. Snow conditions. Use our ‘Skiing’ Condition Reports to evaluate the snow and avalanche conditions before you head out.  Also, check the Snow & Ski  User Reports to see what others are reporting about the current backcountry conditions. 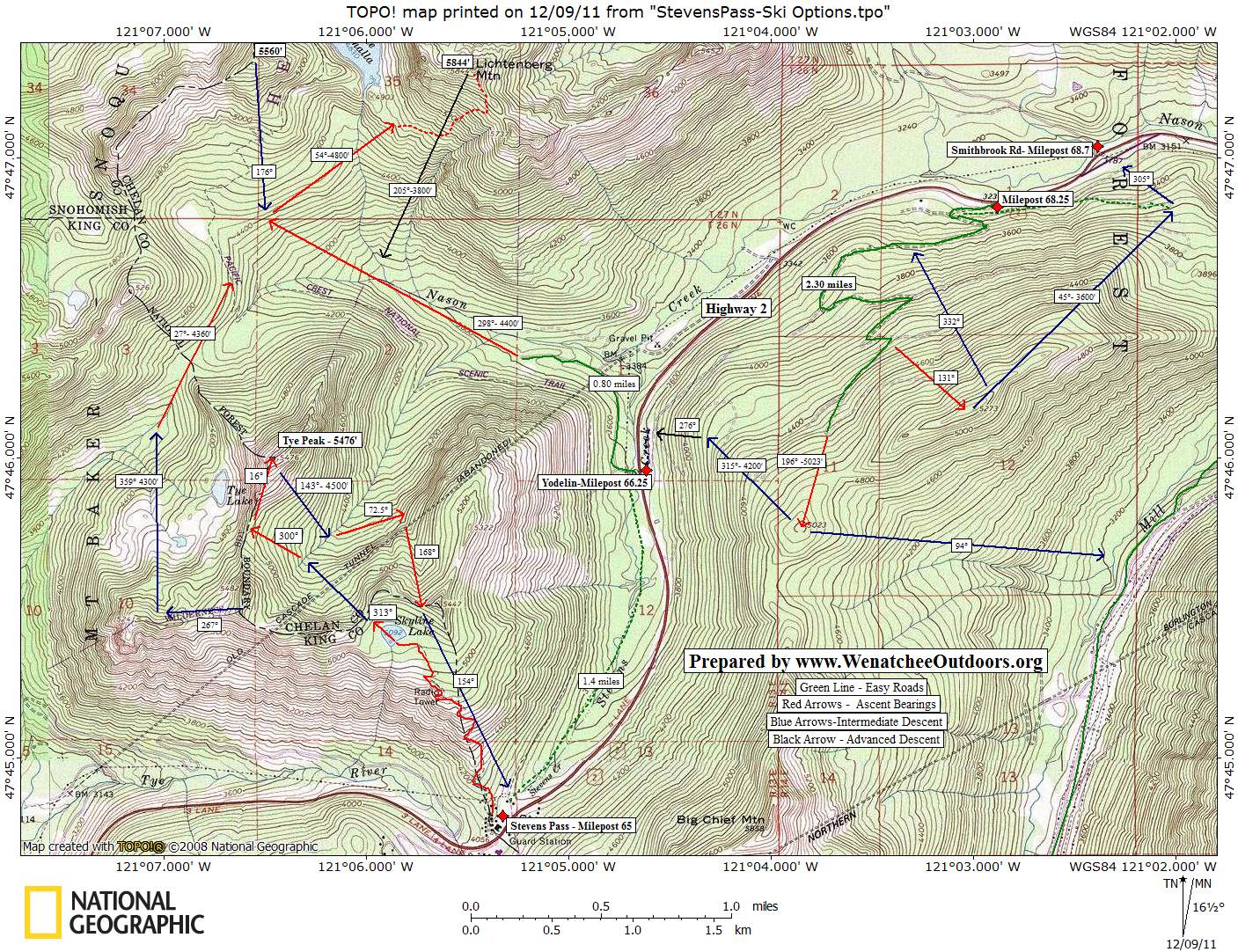