Trails mirror the company we share them with. The trails of the mute are solitary cells of isolation, while those of the chatty become ambulatory confession chambers. Some trails are wandering movie reviews, others are storied trips to new corners of the world.

Today on the eight-hour ascent of Eightmile Mountain via Eightmile Road, Eightmile Trail, Eightmile Lake and Eightmile Creek, Adam is tackling the conundrum of living fully and with purpose. These are personal quests and Adam’s voyage has found enlightenment in the Zenful pursuit of living mindfully in the present. He’s discussing how we need to value the pricelessness of the now…how we fulfill the future by focusing fully on the present.

“In the past two years I’ve known a dozen people who have seen the rules of their lives change in an instant. I’ve got friends who were paralyzed or killed in motor accidents, friends who had legs and knees shattered in skiing crashes, family members immobilized by bad backs, and family members fighting cancer. I’ve stopped believing that there’s no time limit on what I want to ski or climb…or that I can count on having a functional body next month… or even next week. Maybe I’ll be the next one to fall apart.”

“How does that change what you do or how you do it?” I ask short question with long answers, then I save my breath while Adam rambles.

“It’s made me define the big trips I really want to take—and to get serious about making them happen. For example, I don’t want to checkout without actually having taken a shot at climbing the Lotus Flower Tower in the Cirque of the Unclimbables.”

“And what you do about living fully on a day-to-day basis?” “I’m trying not to approach everything at full throttle. On a day like today, I’m trying to slow down and really appreciate beautiful places, beautiful views, and the ambience of the summit. I’m trying to use more gears. Sure…there are times when you need to jet to finish what you set out to do, but I’m trying to appreciate more as I go. So what if a trip takes eight hours rather than six?”

Adam is quiet a moment framing something else. “I’m also less interested in repeating trips. There are a lot of things worth repeating, but right now I’m most interested in cultivating new experiences.

These musings are a synthesis of carpe diem and The Bucket List…Seize the Bucket, if you will. Take this trip to ski Eightmile Mountain–none of us have skied the peak before, but Adam had seen its southern slopes from afar and been tempted. Map study furthered titillated him. In the email dialog discussing our Saturday blitz of the 20-mile round-trip route, I suggested we consider waiting a day. Saturday’s forecasted temperatures and clouds indicated we’d be skiing icy slopes all day. The sunnier weather predicted for Sunday, I argued, would facilitate softer snow conditions. But for Adam, Saturday’s moment was Eightmile Mountain; Sunday had its own moment.

And on Saturday we see Adam’s wisdom in living in the present rather than waiting for a future forecasted by others. By late morning we’ve made the many-mile approach leading past Eightmile Lake and, as we start climbing the 3,000-vertical-foot southern slopes leading to the top, the summit glows in the sun. Despite the forecast, we just might be descending sun-softened corn snow in several hours. We slather on the sun cream and attack the climb.

Hour’s pass while increasingly spectacular sights scroll into view. Whether he’s waiting for me or practicing his new creed, Adam stops occasionally to marvel over the clouds swirling around Mount Stuart, the fog hovering over Eightmile Lake, or the many peaks on the horizon with tempting ski slopes. Photo: Mt Stuart as seen from the southern slopes of Eightmile Mountain

In the end, the sunshine is a tease. It’s given us expansive views and temporary hope of a soft descent but, an hour before we summit, charcoal clouds stream in from the southwest and clot the sky. On top, Adam wants to sit a spell and enjoy the fruits of our efforts, but the cloud level continues to plummet. Peaks only slightly higher than this one are getting swallowed. I argue we should ski the steep slopes below us while the visibility is good.

Pragmatics and aesthetics temporarily collide. Like most decisions in the mountains, there are few absolutes, just a sliding scale of values to choose from. Sometimes speed is simply speed and, as Adam knows, it detracts from appreciation and aesthetics. In this case, speed is safety and we vacate the summit without fully appreciating it. Soon we’re skiing icy snows that are so noisy that foam plugs constitute recommended ear protection. Though loud, the surface is rough and our edges find plenty of grain for grip. As the potential energy of our climb is transformed into kinetic energy for our skis, we all experience joy and exhilaration.

This is Adam’s gift. Had he not prodded me to ‘get after it’ and make the best of the now, I’d be home cleaning gutters. And waiting. Waiting for the sun. Waiting for Godot to deliver good conditions rather than embracing the current possibilities.

Now I’m surrounded by grandeur with windblown cheeks, a bucket full of new memories, and a sense of well being. The future, with all its gutters that still need cleaning, may assault my happiness later, but the present rocks.

Note: Use ‘Print Preview’ first to properly orient and scale the map to your printer.

Distance. Roundtrip distance of about 19 miles from the Icicle River Road and 13 miles from the Eightmile Lake trailhead. In winter this is a long daytrip or a more reasonable overnight trip. Possible Activities. In winter: backcountry skiing and snowshoeing. In summer: peak bagging. Winter is a preferred time (the brush beyond Eightmile Lake will be covered with snow). The non-technical climb, however, is tackled by hikers who don’t mind wrestling with some brush.

Hazards. Big avalanches sweep the southern, northeastern, and eastern slopes of this peak. Know your shtuff (and your snow) if you ski or snowshoe the peak.

Uses Allowed. Snowmobiling (on the road), skiing, snowshoeing. Snowmobiling is only allowed about 0.75 miles up the Eightmile Trail.

Permits. None needed in winter and spring. 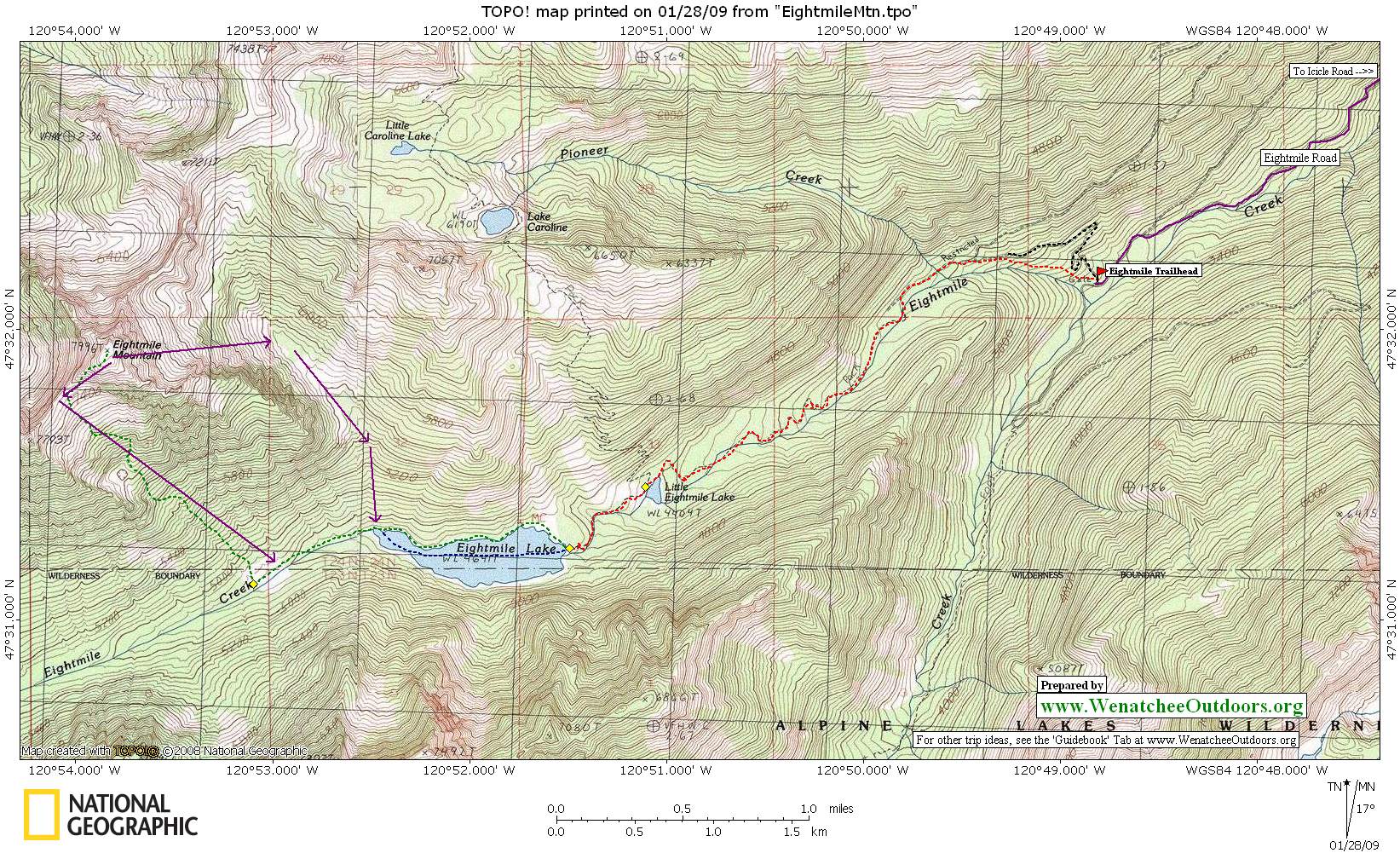