Photo: Looking out over Forbidden Peak and its satellites from Eldorado’s East Ridge

In mid-June, the duo from Wenatchee carried skis up Seven-Fingered Jack only to find the snow gone. Disgruntled, they returned from the mutant-digited mountain and declared their Eastside ski season over. That, however, did not deter them from looking farther afield for plank-footed opportunities. For the obsession of turning left, turning right, and turning left again, the two joined the metastasizing cancer of humanity, consumed an extravagant ration of oil, belched an obscene jigger of greenhouse gases, and struck out for snowfields west of the Cascade crest. Now at 4:40 a.m., Dumb and Dumber are trudging up the brutally steep trail bordering Eldorado Creek, climbing through an old-growth cedar forest sprinkled with the pleasant garnishes of Devil’s club, deadfall, and slide alder. Their packs, pregnant with ski gear, feel familiarly unpleasant, especially in light of their Highway 20 drive that indicated the skiing cup around them might be more than half empty. With their faith waning, they climb onward. And that’s when inspiration strikes.

“An ordinary smart person can climb with a light daypack,” says Dumb, “but it takes exceptional stupidity to climb throughout the summer carrying heavy ski gear.” Dumb elaborates upon a concept. “Drudgery that doesn’t support a higher goal is soul crushing. But drudgery defined as an end in itself is something quite different. It can be savored for its own tangy sting…or its own stinky smell. Maybe it even becomes a gateway to enlightenment.”

Dumber understands. In fact, he distills the concept into a three-word movement, “You’re talking about ‘Carry All Year!’” Seemingly the pace quickens and the load lightens as the charter members of Carry all Year (CAY) chatter about the movement’s future.

“Anyone can afford to gear-up for CAY—just buy 40-year-old equipment at a garage sale.  In fact, people will donate ancient gear for the pure joy of watching their clutter become your burden.”

“And the heavier the ski, the better. Hardcore carriers will understand that the higher the stupidity index, the sweeter the rewards. The Lightniks who don’t really ‘get it’ and who carry cardboard cutouts of skis and boots will never cheat their way to enlightenment.”

“In winter we of the CAY will mock knee-deep powder and S turns. We’ll revel in worming our way through the snowpack and leaving behind chest-deep troughs. Or maybe in December, we’ll fly to the southern hemisphere and carry there.”

Near timberline at the 5600-foot level, the founders of Carry All Year face a moral dilemma: Snow. Enough snow to ski their planned circuit up and over Eldorado Peak, across to Tepeh Towers, down part of the McAllister Glacier, up another portion of the McAllister to the base of Klawatti Peak, with a return to this very spot. Photo: Mt. Torment as seen from timberline near the headwaters of Eldorado Creek

They could carry on as the valiant disciples of a new creed. Or they could cave to self gratification. “Carrying All Year sounds like a commitment to a wonderful relationship,” says Dumb, “yet turning is such a seductive mistress.”

With a conspiratorial nod, they strip the packs and birth the skis.

Photo: On the Inspiration Glacier looking toward Tepeh Towers and Klawatti Peak (right)

Six hours later when they return to this spot, they will have to live with the consequences of preaching one purpose and practicing another…of  sacrificing principles for pleasure. Later when they repack skis and descend the green chastity belt of bush guarding these virginal snows, the charter members of CAY will wrestle with their seduction and the ease with which their greater purpose was desecrated. But here and now, with snow under foot and pleasurable peaks to pillage, Dumb and Dumber, like most of humanity, just don’t give a damn. Photo: The seduction of sin–skiing Eldorado.

Best season. After the Eastside backcountry ski season melts away (usually between late May and mid June) a few Westside places to ski come to mind. The spectacular icefields surrounding Eldorado Peak is one such destination.

Distances here are difficult to measure– the trail up Eldorado Creek to timberline is not an official trail and is a ridiculously steep climber’s trail that wastes no time on flat ground.

Skill Level.  Hikers used to normal trails will find the approach trail difficult—call it a 3+ hike. Mountaineers used to traveling cross-country over rough ground will find the approach trail steep but straightforward. There is about 100 vertical feet of third-class climbing between Eldorado and Roush creeks. The actual skiing once you get above timberline is intermediate (2+) in technical ability. Skiing the Tepeh towers is easy technically but does involve crossing glaciers with some big crevasses. The same applies to skiing the top 1200 vertical feet of the McAllister Glacier.

Access. Drive Highway 20 to Marblemount; then follow the Cascade River Road east. Park in a large parking lot on your left (south) about 100 yards past Milepost 20. Hazards. In winter and spring, huge avalanches can and do sweep down parts of this route. Know how to assess the hazard and follow routes minimizing your exposure. Crevasses will also be found and navigated around on the Inspiration Glacier.

Permits. Permits are not needed for parking or day use of the area. Overnight campers need a backcountry permit issued by North Cascades National Park (offices in Marblemount). 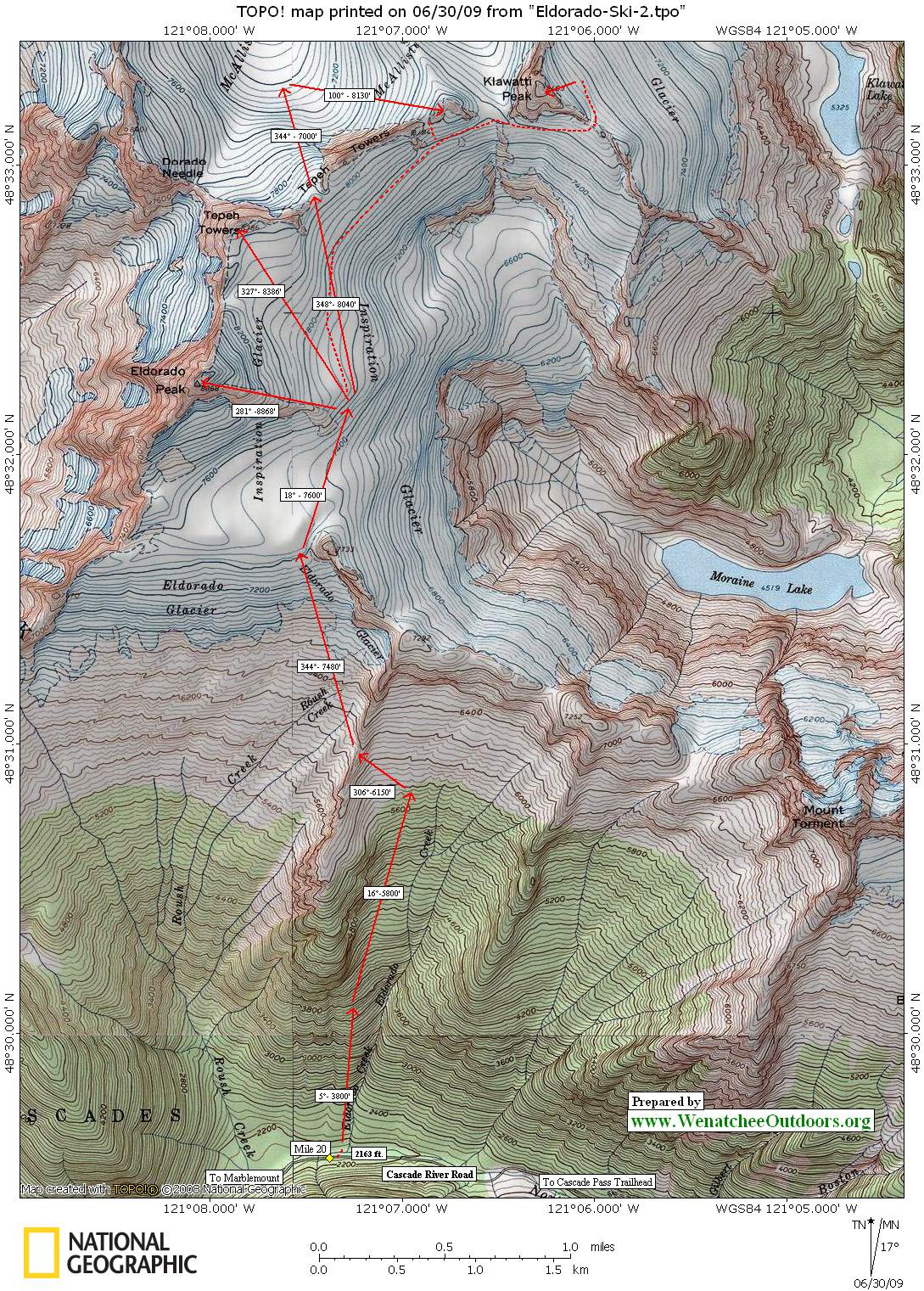