Tom Janisch and I attempted to get back to Highchair Peak Sunday. We were compelled by a photo I took of this peak and the intervening ridge (Ridge 6600) last week from Grindstone. We had obviously forgotten about 18 miles of flat road, and decided it would be fun to try to pull this one off.

By 6 a.m., we were skiing Icicle Road. This time, I went without skins, and Tom ingeniously had some 4 inch skin remnants he put right underfoot on his skis, allowing him to glide more yet provide grip on the gradual uphills. The mileage to the Icicle Creek Trailhead seemed to be more than on our Grindstone tour. We were at the trailhead in 3.5 hours.

We found it ironic, and a little troubling, that after 10 miles of foot travel, we were just now starting our tour. We skied up the trail for about a half mile before making a southward turn into the trees. We skinned the trees forever, up 6600 Ridge for about 2,800 feet. Though it was mostly old growth, the skinning was steep and strenuous. The previous week’s snow provided unstable powder over ice. Around 5,800, the trees finally relented into open slopes. We were more than pleased to find about a foot of new, light powder.

Travel became much easier from this point, but I was already thrashed physically from the approach and trees. But touring with Tom is like aid climbing, providing an unfair advantage. He broke trail the entire distance and was infused with his characteristic enthusiasm despite the suffering. We continued along the ridge, with momentary glimpses of Highchair through the clouds. It was a long ways away still, with many intervening ridges. Good sense finally ruled out (mostly because I was ready to collapse!) and we stopped at Point 6820 on the topographic map.

We de-skinned, and skied 1,600 vertical feet of some of the best powder all season. We jumped over a small ridge and skied an unmarked drainage 3,000 feet back to the trail. This skiing too was in incredible powder through old growth, and natural half-pipes also filled with the light snow. Unlike previous tours, at no point during the descent was the snow bad. We both agreed it was one of the most unique ski descents we’ve had all season, as we hit the coverage and snow just right. Details, Details
WenatcheeOutdoors asked John Plotz if there was a more direct skiing ascent of Highchair Mountain that backcountry skiers might want to consider. Here’s what he said:
A more direct route for bagging Highchair ?? Is helicopter-access restricted in this area?  The only way I would want to try this again as a day trip is if 1) I had a snowmobile ride to the trailhead 2)the snow was firm corn for quick skinning.
All the new snow we encountered, while good for epic turns, was challenging for fast skinning.

Going up Blackjack Ridge appears more direct, but it is heavily forested for almost the entire distance.  The same is true for Black Pine drainage.  So, following 6600 Ridge would be my only choice.  Plus it’s the most scenic route.

Highchair Mountain Logistics: With Plotz’s advice in mind, if you don’t have a snowmobile assist, consider doing Highchair or 6600-foot Ridge as a lightweight, multi-day trip. On day 1, ski/snowshoe the road and a kilometer up the Icicle Creek Trail to where the actual climbing splits off and camp. Use day 2 for the climb and day 3 for the return to your vehicle. Or, immeditely after the Icicle Road melts out (or is plowed) tackle the route as a day tour.

Variation to consider: If Highchair is the intended goal, we wonder whether this variation might not prove faster and create an interesting loop: Make the ascent of Highchair by using the trail up Blackjack Ridge to reach the summit of Blackjack Mountain, drop down the southern ridges to the 6200-foot level, climb the east-facing slopes leading to the summit of Highchair. On the descent, descend the NE ridge and the NE bowls of Highchair to about 5600-foot level; then make a contouring ascent toward peaklet 6,820 to intersect Plotz’s ascent and descent routes.

Access: From Leavenworth, follow Icicle Rd up Icicle Creek about 6 miles past the Sleeping Lady Resort and park at the end of the plowed road (usually just past the turn to the Bridge Creek Campground).

Maps: View the topo map below for more information on this tour.

Permits needed: A Northwest Forest Pass is needed in summer but will not be required before the Icicle Road is plowed to the Icicle Creek Trailhead. Likewise a Sno-Park permit is not required to park at the end of the plowed road near Bridge Creek. 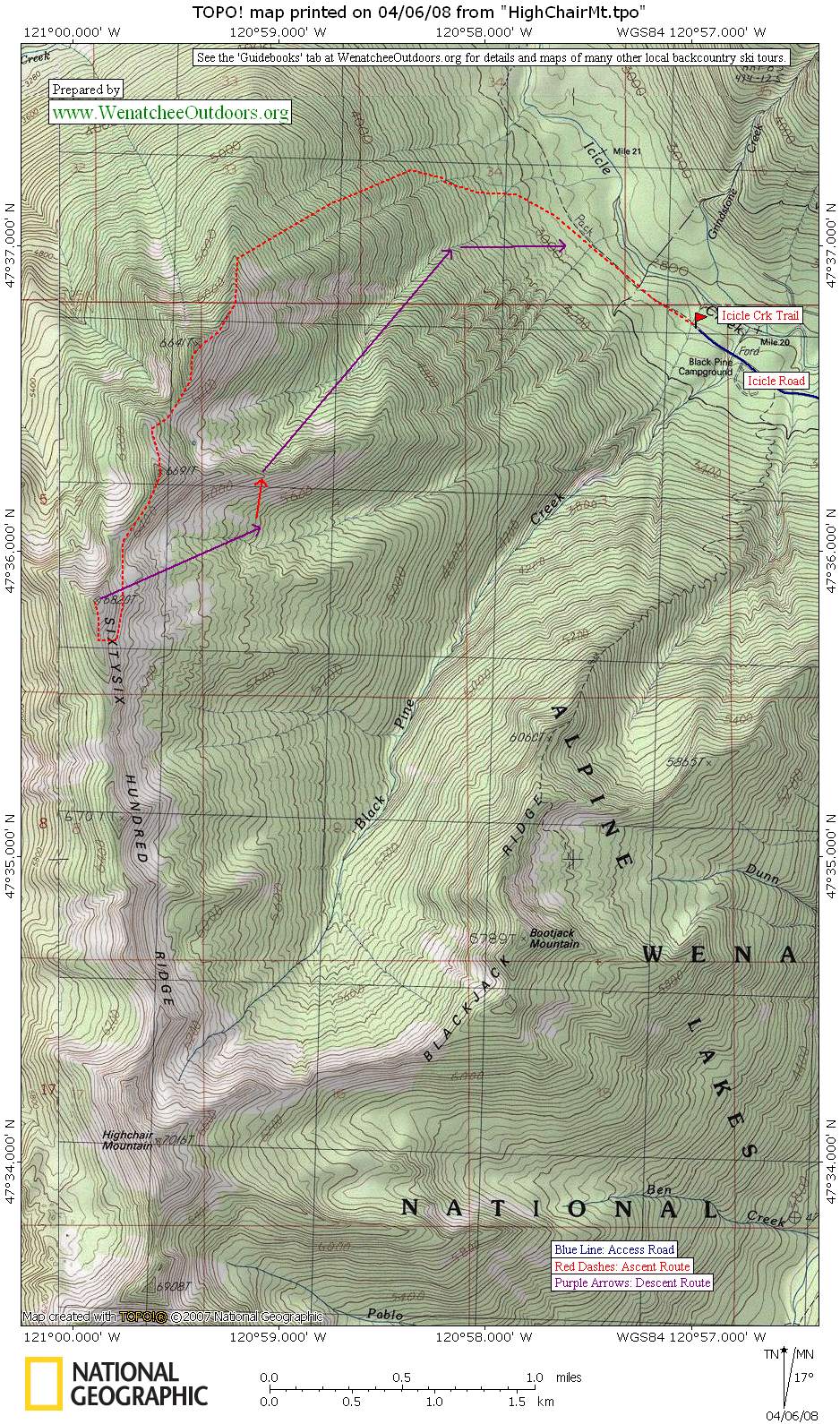