Words and photos by John Plotz

I’m a visual learner so I’m partial to the cliché that a picture is worth a 1,000 words.  People can tell me all about a sick line that they’ve skied, or a splitter crack they may have climbed, but I have to see it for my imagination to kick in.  Not surprisingly, I spend too much time looking at snapshots of local mountains and their corresponding couloirs.  For me, they provide the daydreams of a thousand ski descents – some are just wishful thinking, others I’m able to turn into reality.

Last spring, Andy Dappen, Tom Janisch and I ski toured Mt. Cashmere.  On that outing, I looked back toward Cannon Mountain, and I was awestruck by a steep, rocky headwall that appeared to have a serpentine tail of snow that seemingly reached all the way to valley bottom.  From my vantage point, it looked like a nearly uninterrupted run from the summit to the trail, delivering close to a vertical mile of skiing. Some of that skiing would be steep and committing, the rest would be fun cruising.  I snapped a photo of this local dream route and put it on my laptop to be ogled until I had the chance to ski it. That time came on Saturday (2/6/2010).  I recruited a couple west-side friends, Scott and Will, and my stalwart partner Kyle Flick.  Things didn’t start well for Kyle when at the parking lot, he noticed he had failed to pack his avalanche beacon for the tour.

The approach took us 0.5 miles up the Stuart Lake Trail.  From that point, we followed my GPS up through thick trees to a nice flat area at the 5,000-foot level.  From this point forward, we would be ascending an avalanche runout zone.  Given that this tour would ascend a significant avalanche path for a few thousand feet, we would be exposed to that objective hazard for at least three to four hours. Being sans beacon, this weighed heavily on Kyle’s psyche, causing him to turn back low down on the route.  Those of us with transceivers but less common sense, continued.   Eventually, Will, Scott and I broke out of the dreary clouds that have blanketed the Wenatchee Valley all winter.  We found ourselves right at the base of the headwall cliffs.  With the slope being too steep to skin, we switched to crampons and ice axes and kicked steps up the headwall.  There were a few sections of sink-to-your-knees powder, but overall the slope remained firm enough to make efficient upward movement. By 1:30 p.m. the three of us were on the summit ridge, basking in sunlight and actually enjoying an icy wind that made the summit jaunt feel like winter for the first time this year. I’m partial to Cannon Mountain’s summit.  It is plainly visible from most anywhere in Wenatchee, and commands an excellent vista into the Upper Enchantments, Druid Plateau, Coney Lake Basin and Hel Basin.  If the clouds weren’t so persistent, we would have been able to see the neighborhoods in Wenatchee, East Wenatchee, and on Badger Mountain.

The view west is also unobstructed and highly recommended!  We snapped our summit shots and decided we had had our fill of the chilly wind.  Will and I clicked into our skis, and Scott, being the oddball snowboarder, slithered down the rimed ridge to our ascent route.

The skiing on this northwest-facing headwall was as I expected: It was firm, steep and by no means perfect. Still, we found pockets of decent powder to make up for the challenging sections.  Under the headwall, we could really open it up.  The snow had the consistency of baby powder. At times I couldn’t tell if my skis were even touching the snow anymore.  This section of perfect turns lasted quite a while, then we came crashing back to backcountry reality in a huge thicket of slide alder and thick trees.  The nightmare continued like this for another 800′ to the Stuart Lake Trail.

Back on the well-worn trail, we congratulated ourselves on finding such an outstanding run and making it down safely. In the back of my mind, I was already looking forward to reviewing the photos I took. From them there will be more daydreaming…and some future outings.

Skill Level:  3+ (advanced to expert). The headwall area is consistently 43 to 45 degrees with the top 500 feet being the steepest.

Skiability. The Plotz party skied the entire route and was able to easily get around the obvious cliff band in the middle of the headwall. Of the 5,000+ vertical feet of skiing, 4,000 feet of it was mostly unobstructed. With some exploration skiers may find a more continuous path down the final 1000 vertical feet of trees and bush leading to the trail.

Avalanche Hazard: Steer well clear of this route if you are at all concerned about snow stability. The route is a large slide path, and you will be exposed to serious objective hazard throughout most of the ascent. Snow could slide a couple thousand feet above you and you wouldn’t know it until it was screaming down on top of you. 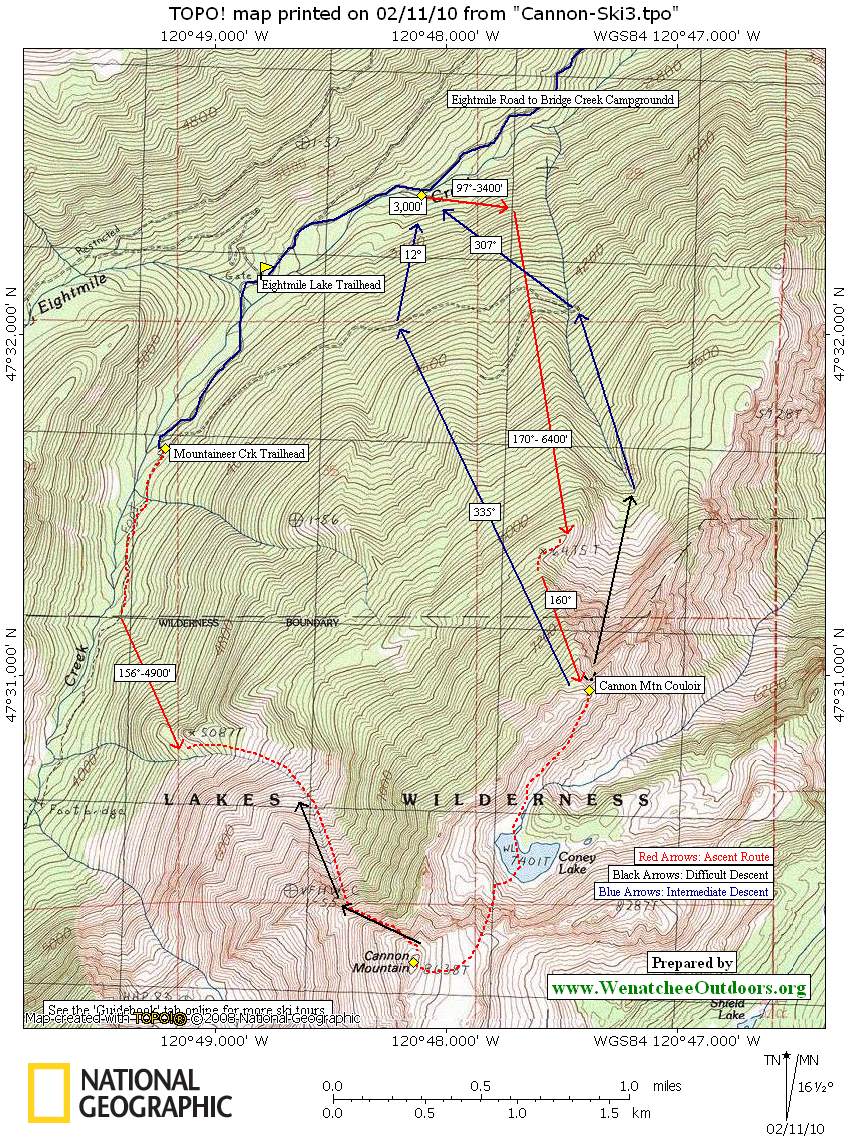