Photo: Cannon Mountain Couloir as seen from the bottom of the Eightmile Road.

Dreams and Dread – The Cannon Mountain Couloir
by Andy Dappen
It’s been on Jamie’s hit list for eons. In fact, every time he’s driven or skied the bottom of the Eightmile Road and looked up, that white gash has been an in-your-face-effrontery that he’s not gotten the job done.

Now he’s finally at the other end of the spectacle – at the top looking steeply down the Cannon Mountain Couloir to the road 6000 vertical feet lower and thinking, “Why did I want to do this?”

The six-hour hoof from bottom to top has given him plenty of time to stew over uncomfortable questions: “Is this more than I’m ready for?” “Will the conditions be so firm as to cause a slide for life or so soft as to bury me under a Slurpee?” “Am I going to die today?”

By the time we reach the top, some of these questions have been answered. Jamie no longer needs to worry about getting caught in a slurry of sliding snow – the surface has been crampon hard. Whew — that only leaves sliding on ice and pinballing between the couloir’s rock walls to worry about.

We lounge at the top discussing whether we should wait for the snow to corn up or whether it has already softened enough to provide adequate edge bite. We throw snowballs and small rocks down the gulley to gauge the firmness of what awaits. Conditions are everything when it comes to skiing dangerous ground. If an inch of soft corn coats the surface, these slopes will  be a picnic. Yet the same couloir can be a killing machine if the snow is rock hard and you lose an edge. As we stare down the gun barrel, Jamie mutters, “Gawd, if I kill myself, Polly’s gonna kill me?”

By modern standards what’s down there  is actually quite passé. The 40-degree slopes we will descend look positively tame when stacked up against the 50- and 55-degree steeps that the big guns of the sport tackle. But to normal mortals like Jamie and me, where the occasional fall is not unusual, flirting with conditions where a fall will result in a death slide is only a good idea when we’ve grown overly weary of paying for college tuition.

Mike Rolfs and I are all for waiting an hour in hopes that the warming air will provide us with that picnic we’d like to ski. Jamie is of an altogether different mind because he knows exactly how his mind work.  Sitting up here and fretting will only curtail his ability to actually ski.  Intellectually he knows he can contend with the current conditions. For him, it will be better to get the job done without thinking about it too much, ”Jiminy Christmas,” he says with a voice that’s an octave too high, “if I wait here much longer my balls are going to disappear.” He steps into his skis and then gingerly steps to the edge of the couloir and sideslips into the entrance gate that isn’t a whole lot wider than the skis themselves. With a combination of sidestepping and sideslipping he works past a chock stone pinching the upper gulley. It’s an obstacle that a hard man might just straight line past. Next, he starts a series of slow,  deliberate stem christies. His skis chatter on a surface that’s more like frozen cookie dough than snow.

The turns aren’t pretty and his speed isn’t spectacular– Teton Mountain Gravity won’t use  footage of this skiing for upcoming movies. Here where a fall is highly discouraged, however, his technique is smart and stable. About a thousand vertical feet below the top,  lower altitudes and higher sun exposure are magically alchemizing  the snow. Over the course of several turns the skis stop chattering on frozen cookie dough and slice into creamy corn. Jamie switches from his jerky survival christies to smooth, carved turns. Grimaces turned to grins.

Onward we go. The steepness backs off, the slopes widen, the corn deepens. The intensity felt moments ago is washed clean by a wave of  pure pleasure skiing. Some 2500 vertical feet from the top we’re either slightly drunk from  this mountain hooch or feeling an emotional rebound called Rapture of the Steep. Jamie is giving us his commentary and can’t decide whether the awful first part of the ride or the wonderful second half of the game will be his overriding memory of the day.  As is frequently the case, his  ranching upbringing colors his language. “You’d have to threaten stringing me out for castration before I’d ski the top again today. The bottom half, however…. Wow! Wasn’t that like running a stallion through golden grass.” Access. From Leavenworth, follow the Icicle River Road about 6 miles beyond the Sleeping Lady Resort. Park in the plowed lot at the end of plowing near the Bridge Creek Campground (elevation 2,080’). No permits are needed to park in winter. 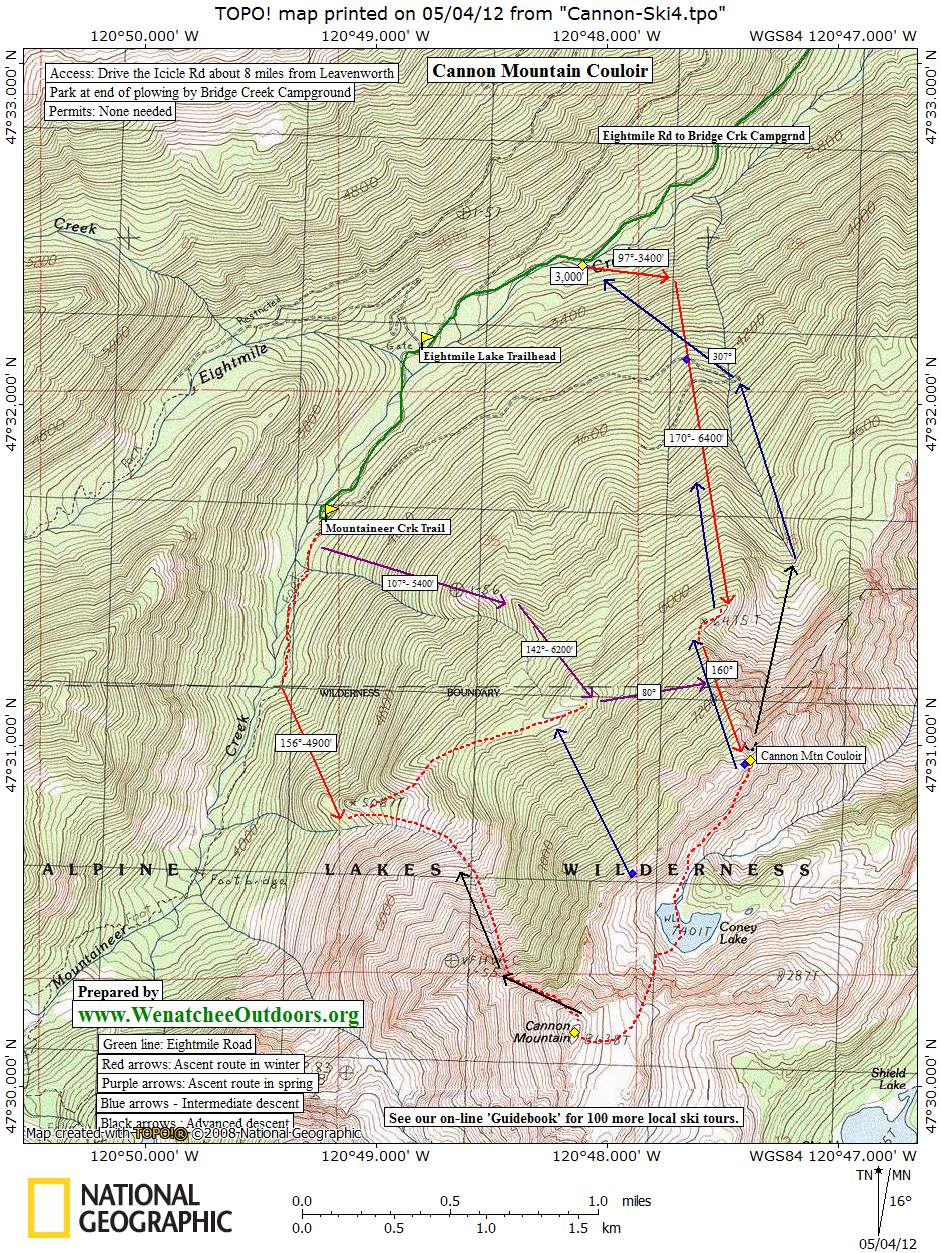