Suppose you ski to a fork in the road and the Guardian of the intersection is either the Devil or God. If the Devil always lies while God always tell the truth, what one question** can you ask that guarantees you’ll reach the powder fields of Heaven rather than the brambles of Hell? Photo: Is the enigmatic Tom Janisch the personification of Good or Evil?

As it turns out, we’re having trouble with much more than this logic question on Saturday morning. Heck, we can’t even find the road leading to the proverbial fork in the road because the map (which is apparently a friend of the Devil) lies. It indicates there should be a logging road branching off Highway 97 where we’ve plotted the start of our Devil’s March —a tour that will take us, up Tronsen Ridge, down its north side into Devil’s Gulch, and back. But there’s no logging road to be found where the map indicates and pulling off the highway near the desired starting point is not possible. Meanwhile, a half a mile before the map’s nonexistent road, there is an existing road that isn’t illustrated on the map. We’re apparently victims of a cartographic Devil’s Triangle. We park the car at the mouth of the existing logging road and start our march using an improvised approach to Peak 4870′, one of the bumps along Tronsen Ridge.

Soon we discover the snow du jour is sloppy and soggy. Anyone with half a brain would, at this stage of the season, abandon this low-lying route for higher ground. The four of us put together, however, have one functioning brain between us and we’re reveling in how much fun it’s going to be to turn in this tricky, gloppy snow. This is snow to be enjoyed because it magnifies your mistakes and enhances the odds of taking a head-over-heels face shot. This is snow to be enjoyed as a teacher and a technique detector. Photo Below: Coron Polley smiling over the devilish weather Minutes from the start we branch off the road and climb, cross-country, to the southwest ridge of Peak 4870’. The going is good on this ridge but, whether it’s been preordained by the Protector or the Tormentor, the weather turns bad. Soon it’s snowing hard and a moderate wind swirls spindrift around us. Rather than complain, my companions exult over the moody weather. Apparently, we of quarter brains aren’t ‘getting’ the cosmic clues that clobber us in quick succession.

Which may be why, near the top of Peak 4870’, my knee which has been creaky of late, goes to Hell in a ski basket. Suddenly any sort of sidestepping creates a click and sometimes a catch. The clicks are disturbing but the catches are painful and I yelp disparaging remarks at the deities who have undermined my powers. Still, a knee that is ripping apart into cartilaginous confetti is hardly the stuff to discourage the Conquistadors of the Irrelevant, so we push on.

We drop off Peak 4870’ along its Northeast Ridge but today even our navigational abilities are bundled up in the same basket as my knee. Perhaps because my knee leaves me unable to sidestep when we must climb to stay on the ridge crest, we opt to descend open slopes heading, more or less, in the right direction. But continually following the white hand of temptation in more or less the right direction eventually leads you more or less into a mess. In this case the mess is a nearly impenetrable mass of thin trees and fallen logs. The mess is the hellish forest born from the public’s desire for, and the Forest Service’s policy of, fire suppression. These forests needed fire, lots of fire, to keep them healthy. Now, after decades of suppression, the woody fuels are so stacked up on the slopes flanking Devils Gulch that any summer fire gaining a foothold here will become a stand-burning conflagration matching the fury of the Rat Creek and Tyee fires that raged across nearby forests in 1994. When that day arrives—as it eventually will – there will be Hell to pay for our collective folly. But that’s not our problem now. Currently our unique form of stupidity simply has us misplaced. Photo Below: The Three Geezers asking a simple question: Where the heck are we? We’re not exactly lost, but neither are we exactly found. Frequently we stop to consult the map and to determine how we can contour through all this deadfall to regain the Northeast Ridge. Each contour has its cheek-slapping thickets and its sidestepping obstacles to navigate. And each attempt to contour devours time. Eventually it’s obvious that time has begun to work against us.

It’s only then that I’m reminded of the joke of the shipwrecked religious zealot who passes up a floating door, a floating tire, a life ring, and a helpful dolphin because he’s a man of faith who believes God will send him a lifeboat. He drowns and suddenly finds himself at the Pearly Gates standing beside a sign stating, “No idiots admitted.” He complains bitterly that God didn’t try to save him. “Didn’t try save you?” Saint Peter scoffs, “God sent you a floating door, a tire, a life ring, and even a dolphin but you were too stupid to grab hold.”

It could be coincidence but there seems to be a Karmic insistence that we terminate today’s quest. Finally, we grab hold of the dolphin and turn around. We skin up and lay an uphill track away from these green nightmares. Our ski track is an ascending contour that, after 20 minutes, has us out of the woods and on the crest of the Northeast Ridge that we should have been following all along. It’s a relatively open line and, despite the occasional bump to climb over, it’s well-suited to skiing. The gully systems flanking us to climber’s left, meanwhile, are vegetation free and drop at least a 1000 vertical feet before disappearing into the mists below. On the right days these could offer beautiful descents; today greater powers apparently want us to stay away.

Knowing what we now know about the forested Hell holes on the back side of Tronsen Ridge, our deviation from the ridges of the Devils March was pure folly. Still, the reconnaissance has been enlightening. At the right time of winter, in the right weather, with a functional right knee, and by taking the right forks along the way, there’s a paradox to enjoy back here – heavenly lines dropping directly into the Devil’s Gulch. Activities. We did this route on backcountry ski gear but the route would be excellent for snowshoers. Because the ridges don’t have thick vegetation, this would also be a scenic cross-country ridge hike in summer. Snowshoers may have an easier time dropping into Devils Gulch because they can more easily stick to the undulating ridge crests than skiers on unskinned skis.

Season. For snowshoers, the quality and depth of snow is less important than it is for skiers so their season for this trek is considerably longer (latish December to mid-April). For skiers, the lowest parts of the route are at an elevation of 2,150 feet where the mushy, thin snowpack can make the skiing tricky and more hazardous. Typically the best skiing is likely to be found between early January to early March.

Fitness: 2+ to 3 (intermediate to advanced).

Access. Drive south on Highway 97 about 18 miles from the Big Y Junction (the junction of Highway 2 and Highway 97) and park on the east side of the highway at the mouth of an unnamed logging road located near milepost 167. More specifically, drive 1.8 miles south of the Five Mile Road and look for the logging road mentioned above. Usually there’s a small pullout at the base of this road. No permit needed. Starting elevation: 3350’.

Map: See our topo map below for more information.

Alternative Descents. Skiers may want to try the more direct and steeper descents in the gullies between the two ridge systems described that lead into and out of Devils Gulch (these are noted as yellow dashed lines on our map.) These steeper lines do avalanche and subject you to the risk of being buried in terrain traps. Understand whether the avalanche conditions of the day allow for a safe descent — when in doubt, stick to the ridges. Hazards. This route is particularly good for snowshoeing. The snowpack can be thin on many parts of the route so skiers run the risk of grounding out on rocks and sticks. Finally, avalanches are a hazard – especially in the steeper gullies shown on the map.

Photo: Did we mention the snowpack is thin in places?

** Here’s the question that will have both the Devil and God pointing you in the desired direction: “Which way to your home?” 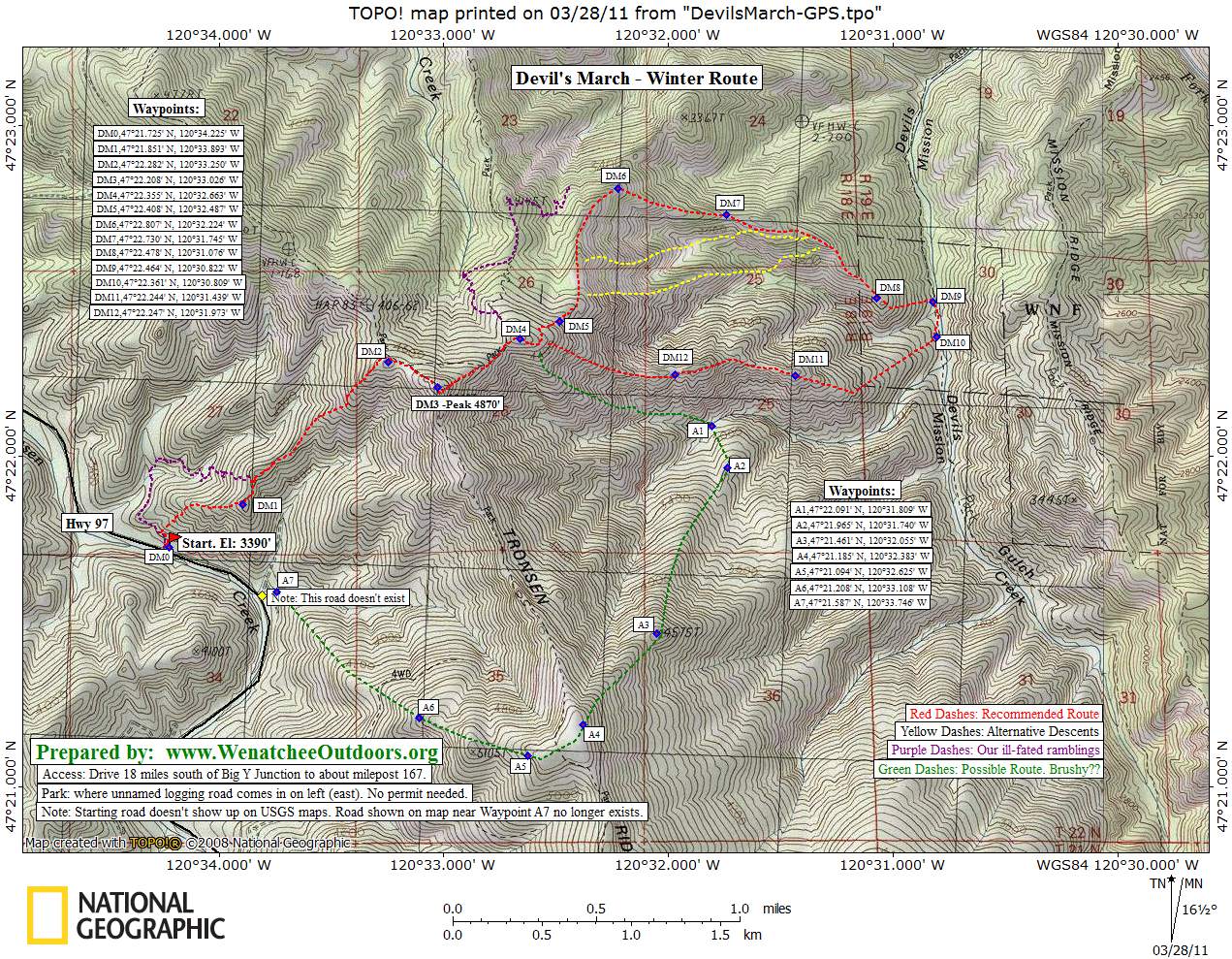