Attractions. Enjoy a side of history along with your exercise by walking, running, or biking the Similkameen Trail, a 3.5 mile (one way) segment of the old railroad grade that once ran along the Similkameen River between the towns of Oroville and Nighthawk. The route is a little drab for the first 0.75 miles, but the trail soon enters a spectacular gorge where you’ll be impressed with the scenery and the work it took to build a railroad line through such rugged country.

History of the trail. In 1909, the Great Northern Railway built this grade along the Similkameen River from Oroville to Nighthawk and beyond to the mines located at Hedley, British Columbia. Construction of the Oroville to Wenatchee line (for getting all the ore out to market) was completed in 1914. The railroad lines were divided into 6 to 8 miles sections overseen by an engineer and all the work done on these lines was completed by human hand or horse teams. Fresnos (horse drawn shovels) were used for the grading. The men doing the back breaking work were called ‘bindlestiffs’ because they carried possessions and bedding on a bundle carried on a stick slung over the shoulder.

Plans to complete railroad lines to Vancouver were scrapped when Canadian Pacific completed their “Transcanada” line farther north. Okanogan County had long awaited rails to transport ore from mines, but for many, they arrived too late. By the time the railroad was constructed, mineral prices were falling and many of the mines were no longer profitable. The Similkameen Line brought rich ores south from Hedley until the 1970s, but when flooding damaged this route, it was decided that repairing the damage was not worth the expense. In 1985, the rails and railroad ties were removed from the route. In 2009, the first 3.5 miles of the trail were converted into a rail trail. The hope is to one day complete the trail all the way to Nighthawk. Activities. Biking, running, walking. Motorized vehicles are not allowed.
Access: Drive Highway 97 to Oroville. At milepost 331.8  turn west onto 12th Avenue. Go one block, turn north (right) on Ironwood and go 2 blocks, turn left on Kernan and go 0.2 miles to a dirt pulloff for Similkameen Trail. There are no amenities here, just an information kiosk. No permits are needed for the trail.

* 1.75 miles. The trail crosses the river on a spectacular bridge that’s about 140 feet above river. Now on the opposite side of the river (which is usually around 80-100 feet below you), witness all the work that went into blasting and moving rock to make the rail bed.

* 2.75 miles. A small trail drops down to the river, accessing nice eddies and small beaches. On a hot day, swimming is very tempting and feasible, but do so at your own risk.

* At 3.5 miles, a gate is reached that, for now, marks trail’s end. Views in the distance of Enloe Falls and a few limestone peaks make this a pretty spot to rest before turning around. It’s a spot that will have you hoping the county finds a way to extend this trail to Nighthawk.

Leave It Better Than You Found It: This should be every outdoor user’s goal. Pick up trash left by others and stay on the trail. Please be particularly mindful of not wandering off-trail when on private property. To extend the trail upstream, the county will need to prove to landowners upstream that trail users respect private property. 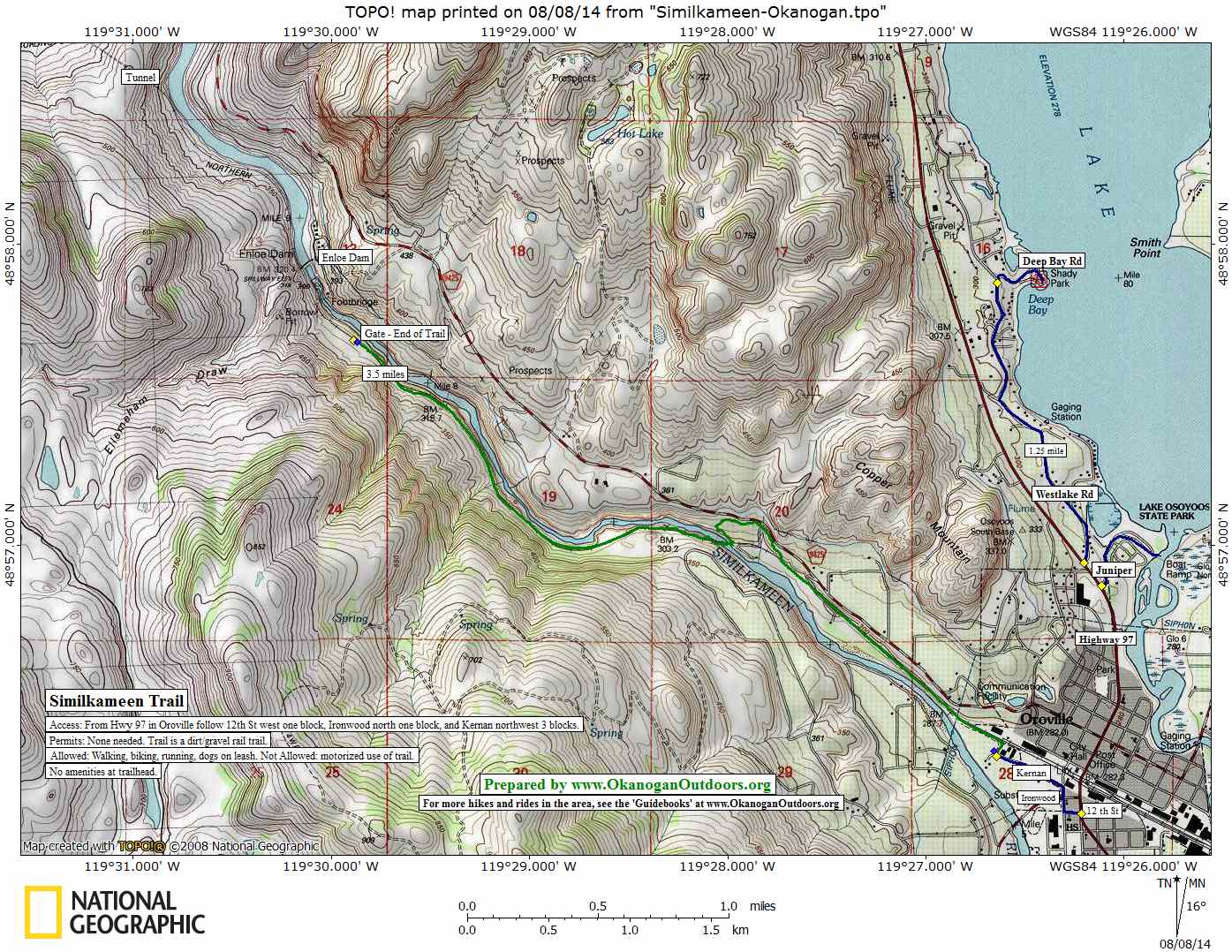