Low snow came early and stayed late. For local backcountry skiers and snowshoers this poses a question: Why travel massive distances — like all the way to Blewett Pass – for winter recreation  when rare plums in the local hills await harvesting? Twin Peaks is one such local plum and even though I’ve lived in Wenatchee for nearly 20 years, it’s home to some slopes I’ve only skied, many others I’ve never skied. That’s made this a good winter to explore new ground.

Today’s tour for example, starts at the end of the pavement up Number Two Canyon Road, 4 miles from the edge of Wenatchee. Initially it follows the snowed-over road winding up the south flanks of the peak. One-and-a-half miles up the road, a variation presents itself. The slopes heading uphill west of the road are well-covered and utterly untrammeled. When conditions allow wandering through roadless country, why not accept the invitation?

The going on the roadless slopes is slow, not because travel is difficult but because there’s so much to enjoy. Squirrels chatter, jays cackle, tracks between red-barked ponderosas abound. I stop to photograph Mission Peak. I stop to trace the route of the now dead Hog Loppet that followed a distance ridge. I stop to examine the Mission Ridge ski area from a new angle. The light is dappled but, where sun strikes ground, crystals of hoar frost flash like miniature strobes. Gradually I reach the quiet western summit of Twin Peaks. Compared to jaunts when I’m in workout mode, it takes twice the time to get here but the route has delivered four times the pleasure.

On this summit the views to the west and northwest dominate. I particularly enjoy the nearby hills surrounding Cashmere that look like the layers of a chocolate parfait. I’m also struck by all the rock towers of Temple Ridge farther away in the Enchantments. The western slopes below the summit are usually wind blasted by the prevailing weather but today a mixture of hoar-frost and powder sit on top of a firm crust. It’s a concoction begging to be skied and carving downhill through glades of old trees made crooked by frequent windstorms provides a gemstone for memory. A thousand vertical feet lower trees thicken, slopes steepen, and snow hardens. Passage is possible but not pleasurable. Skins are reapplied to ski bases and an uphill wander commences. The ponderosas captivate me with their beauty, yet it’s one gnarled Douglas fir that takes the prize for being most memorable. It’s height is unremarkable but it’s branches are twisted into bizarre shapes and its trunk is so fat it takes three of my six-foot wingspans to encircle it. Up top again I wind around to the north and look down on Cashmere and over to Chumstick Mountain. The northern slopes below are more heavily forested and I have never tried to ski them.  I push off and for several minutes white leads through the green canopy keep materializing. Then the pleasant surprise turns to disappointment, the bigger trees that started the run empty into a unit of second-growth spindle . There’s no real progress to be made here, only rude slaps to the face from fledgling trees. Skins are reapplied and a half-hour later I stand on the eastern summit of Twin Peaks looking down on the blue string of the Columbia River threading through our crumpled landscape.

The skiing down the prominent East Ridge of the peak looks spectacular – the ridge glows with early afternoon sunlight.  It has a gravity that pulls me down it. The first few turns along it are made tentatively to gauge the snow quality. The snow is sun softened and carves nicely — I let the skis run freer. Occasionally rock outcrops and hut-sized boulders cap the ridge. Often these blockages are best circumnavigated on the north side of the ridge. Today there is enough snow to wind around these obstacles on the sun-soaked south side. Off the ridgeline the southern aspects are steep and long. There’s a perceived fear that a botched turn could result in a long, uncontrolled slide that could suck a body into a ravine where it would never be found. I concentrate on botch-free turns.

Two thousand vertical feet of memorable skiing leads to a saddle on the ridge situated at the division between the forested hills above and the shrub-steppe foothills below. It’s a vantage point worthy of a stop.  Looking back at Twin Peaks from here multiple ridges pour off the summit like the many arms of a sea star. Between each arm are canyons and ravines forming miniature unvisited worlds that hide in plain sight. Even though I’ve hunted out these lost worlds for nearly two decades, the inventory of places visited is small compared to places unvisited.

My eyes keep returning to a steep, southeast-facing ridge catching the sunlight. It forms a brash slash leading from the airy summit into a dark ravine that I’ve yet to call upon. The crest of the ridge is rounded and holds enough snow to ski. I study the sky and frown. By the time I re-climb the peak, the sun will be near the western horizon , those shining snows will be shaded and locked up in ice. I address the ridge, “Not today, but soon.”

Distance: Round-trip distance to the summit via the road is roughly 7.5 miles. As the article above explains, when snow-coverage allows many options exist.

Recommended Season: For snowshoes and skis the area is generally best traveled from late December into February.

Access: In Wenatchee, drive south on Western Avenue until it bends hard to the right, and becomes Number Two Canyon Road. Follow Number Two Canyon Road 4.2 miles until the plowed road ends. There is a small pullout (on the south side of the road) at the very end of the road where you can park (elevation 2,535 feet). Don’t park in the larger parking area on the north side of the road — this is private property and cars parked here antagonize the owner.

Cons / Hazards: Snow amounts vary from year to year. Because the area is not that high, snow consistency is not always good.

Issues: The second gate on the road leading up Twin Peaks has a sign stating, “Closed to all motorized vehicles.” It then shows pictures of a car, 4-wheeler, motorcycle, and snowmobile. Formerly snowmobiles had been allowed past the gate, but that situation has changed and you have every right to politely inform motorized recreationalists encountered behind the gate that they are not allowed here. If you do encounter motorists beyond the gate, keep the conversation friendly — most motorists are out enjoying themselves and polite discourse will discourage them from revisiting.

Land Ownership: Mainly Forest Service. Some land flanking the road at the start of this route is private. Up near the top of the peak, one section of land just north of the summit is also private.

Leave It Better Than You Found It: This should be every outdoor user’s goal. Pick up trash left by others, pull noxious weeds along your route, disperse old fire rings (they encourage more fires), throw branches over spur trails and spurs between switchbacks (make it harder to do the wrong thing than the right thing).

Important Disclaimer: Treat this information as recommendations, not gospel. Things change and conditions change. Also, those contributing these reports are volunteers who may make mistakes, may fail to give complete information, or may not know all the issues affecting a route. Forget about finger pointing: If things go wrong, you are completely responsible for yourself and your actions. If you can’t live with that, you are prohibited from using our information. 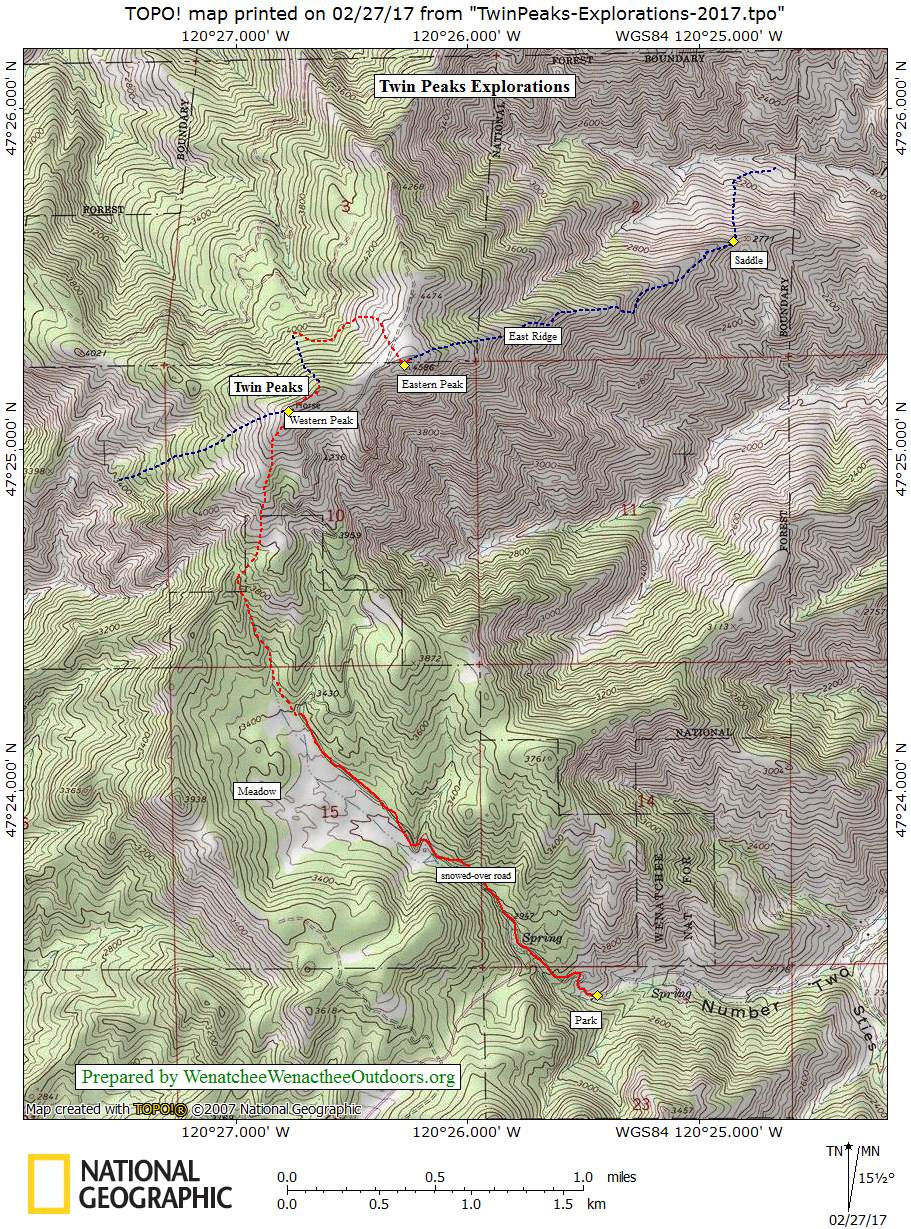