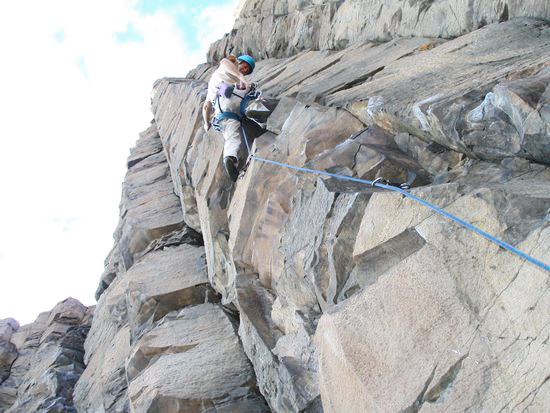 Charlie Hickenbottom, a third-grade teacher at Lewis and Clark Elementary School, has been pegged by his fellow teachers as a man who “teaches when he isn’t climbing.” Early in the spring of 2008 Charlie told his colleague, Tracie Sleeper, and her son, Enrique, that he’d take them climbing in the summer. As summer approached, other teachers in Charlie’s circle—Cindilia de la Mora, Teresa McFadden, Jocelyn Flitton, and Jamie Johnson– heard of the offer and horned in on the deal. Charlie rounded up shoes, helmets, harnesses, and ropes from climbing friends and, a week after school let out, took his bevy of new climbers out to the walls of Vantage. It was time to teach the teachers new tricks. 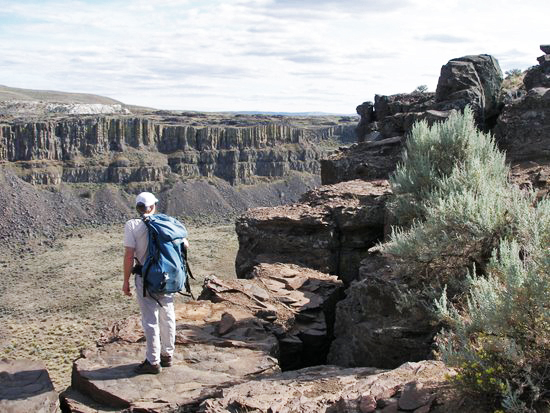 On the drive to Frenchman’s Coulee near Vantage, Charlie and Cindilia (Cindy), spend a good deal of time deconstructing the year. Charlie and Cindy shared 35 third graders in Lewis and Clark’s dual language program. Charlie taught half of the kids in English while the other half were with Cindy learning in Spanish. Halfway through the day, the kids would switch classrooms, teachers, and languages. Cindy is bittersweet about the school year being over now. “I loved our classes,” she tells Charlie. “The kids were all so supportive of each other.”

That support seems to be a byproduct of the dual language program because children whose native language is English are partnered with kids growing up in Spanish-speaking homes. It’s a situation demanding a breakdown of class distinction and one where students see that their partner from another culture brings missing skills—like language itself– to the mix. “Don’t you think our kids seemed wise beyond their years in the way they supported and cared for each other?” Cindy asks Charlie.

Charlie for his part sees parallels in what Cindy is discussing to the day ahead. He says climbing also partners people with different strengths and, together, they can reach goals that elude individuals.

At the parking lot of The Feathers, a clump of basalt columns with a cluster of short climbs ranging from 5.0 to 5.11 in difficulty, the teachers are surprised about the aesthetics of the desert surroundings. “I had no idea it would be so beautiful,” Teresa McFadden says as her eyes sweep from the blooming buckwheat, over the tiered cliffs of the distant coulee, around to the rust-colored walls bordering the parking. 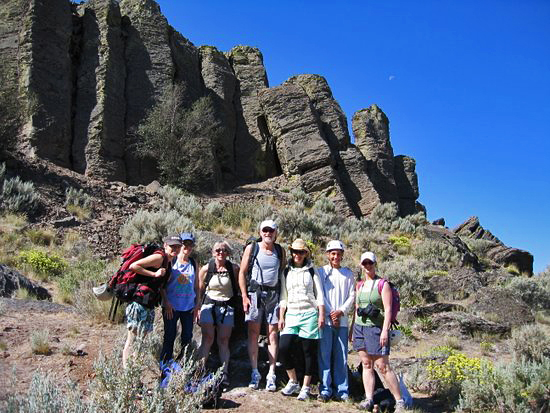 Students for a day.

Given this year’s cool spring, everyone is also enjoying the deep blue hue of the sky as well as the deep-tissue warmth of the sun. “What a way to start the summer,” Cindy comments.

Charlie distributes boxes of borrowed equipment and helmets, ropes, and harnesses are carried a short distance to the walls. Then Charlie and a few borrowed helpers with climbing experience, string ropes from the tops of many climbs. 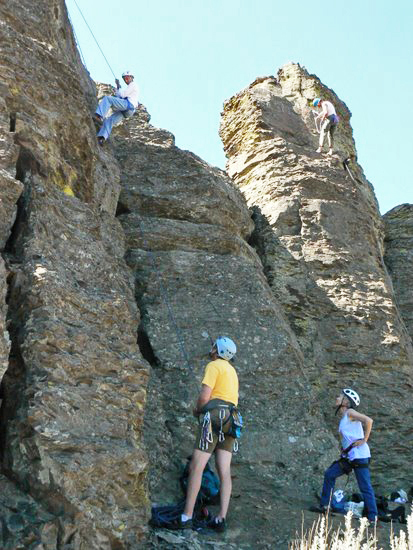 Over the course of the day, The Feathers become a Baskin and Robbins of climbing. The teachers can move easily from rope to rope sampling climbs of different flavor, steepness, character, and difficulty. The teachers, meanwhile, live up to what you’d expect of women working with eight- and nine-year-old children—they are nurturing and supportive. “Way to go!” and “Good job!” are the wind chimes of the day. Everyone celebrates an individual’s success.

Yet for all this support no one lets another cop-out easily. Each new climber encounters problems during the day where she clutches the rock, whimpers like a child, and falters in the courage needed to push on to the point of falling. “I can’t do this,” Cindy says at one point in the afternoon. Her mental composure has evaporated and she is physically hugging the rock, thinking that worming her flesh around every available nook of rock may provide the friction needed to prevent falling. “You don’t know what you can and can’t do yet,” Jocelyn tells her. “You can do a whole lot more than you think. Keep going!” Cindy is getting physically spanked by this cliff, mentally spanked by her colleague. 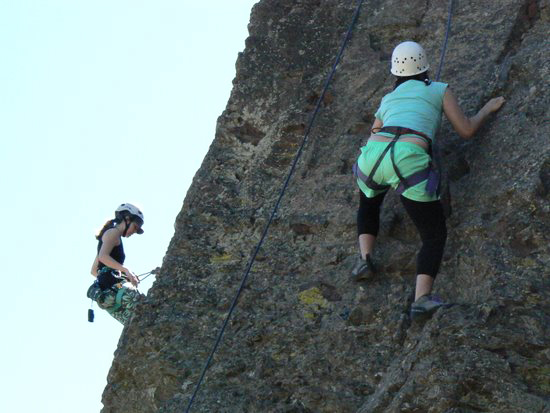 But the prodding from colleagues can take a quick about-face. Cindy finally gives up on this climb and allows herself to be lowered off. Her dead arms hang uselessly at her side like dangling sausages. “Good effort,” the others yell up to her. “That’s one to come back for another day,” Teresa tells her. “It’s not just a climb now, it’s a measuring stick.”

By mid-afternoon, each of the teachers has found a measuring stick of their own. And each has useless, dead arms. Charlie has prompted them all day to get their weight on their feet and let the strong muscles of legs, rather than the weak muscles of arms do the heavy lifting. Even if they are teachers, however, they’re not much different than normal pupils – firsthand experience cements lessons that words only takes so far. 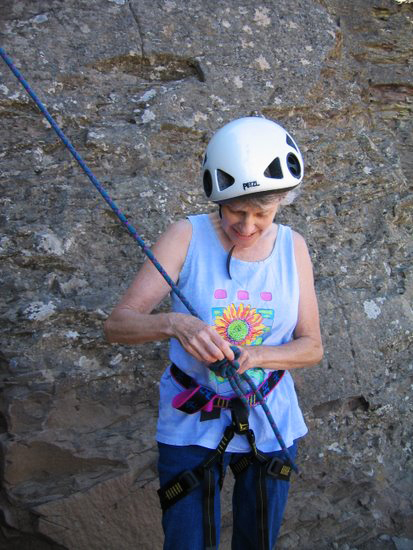 Teresa McFadden didn’t need to ask, “Why do I need to know this knot?”

“I’m going to be sooo sore tomorrow,” Teresa says. The comment is echoed by the rest in a good way—with humor rather than rancor. When asked who will and who won’t attend Charlie’s next climbing session, everyone wants in.

The cars are loaded but, before departing, the group is waxing philosophic about the day. “It would be so good to give kids this kind of experience,” one says. The rest ride that thought for a while, stressing how climbing would teach kids trust, confidence, the power of mind over matter … in success and in failure. It would teach kids to accept that they can’t beat every problem but that tenacity can best problems tomorrow that seemed insurmountable today. 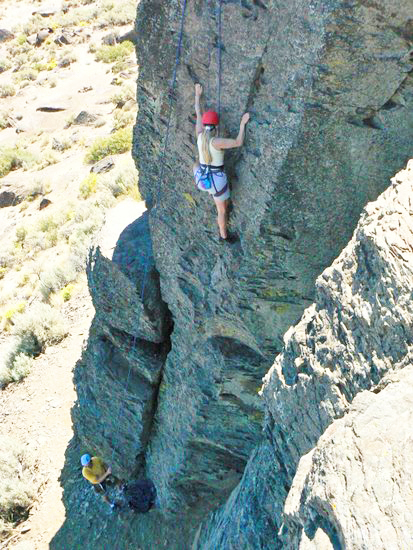 Questions are asked about why schools so rarely have outdoor opportunities, outdoor clubs, or outdoor field trips. “It’s a crime we don’t even teach swimming anymore,” Teresa complains. “We’re a city located at the confluence of two rivers.”

It’s also a crime, others say, that in a city with such easy access to natural areas that many local children don’t even know what Saddle Rock is much less that they could have a great time exploring the area. Others mention how few kids even ride their bikes to school anymore. Charlie says he’s taken kids down on the Loop in times past and been flabbergasted that nearly half of those kids have never visited the Loop before.

The cost of busing has killed many extracurricular activities. More to the point, paperwork, regulations, and liability concerns have gutted the willingness of any teacher showing a spark of enthusiasm about exposing kids to the world beyond the school walls.

Cindy is intrigued by the possibility of incorporating the outdoor world into the world of students. “You and I should start an after-school club,” she tells Charlie. “My parents took me camping and fishing a lot when I was growing up, but most kids don’t do this stuff anymore. They’re growing up with Wii rather than nature.” 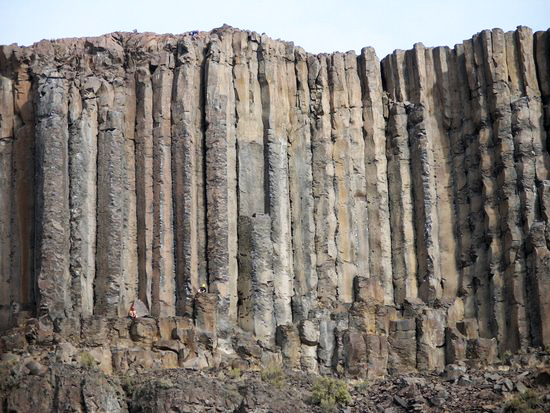 There’s much to be said for holding classes here. 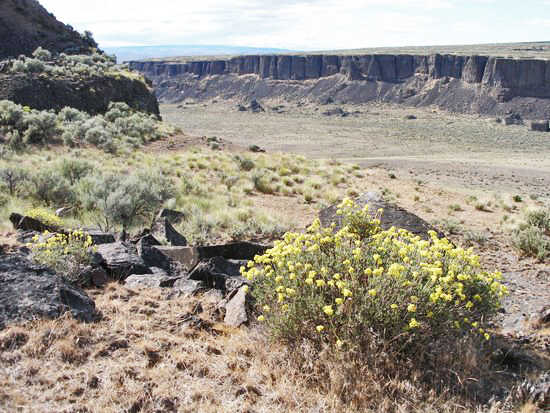 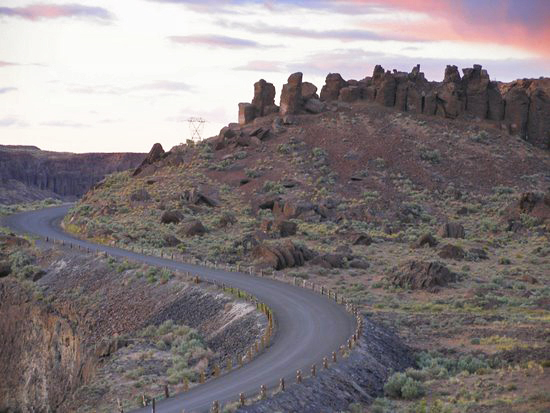 “We’re not far from the day when a robin flies by and kids can’t tell you what kind of bird they just saw,” Charlie says. Others pipe in about the benefits of the outdoors—the exercise it provides, the health benefits, the world of imaginative exploration it opens up. And about the cost benefits – so much can be done with little or no cost.

Nothing definitive catalyzes from the discussion, but Charlie’s willingness to expose his colleagues to what he does when he isn’t teaching has planted seeds. Everyone is thinking about ways of “paying it forward” to a generation that has lost entrances into the natural world.

This post, written by Andy Dappen, was originally published on 7/5/08.