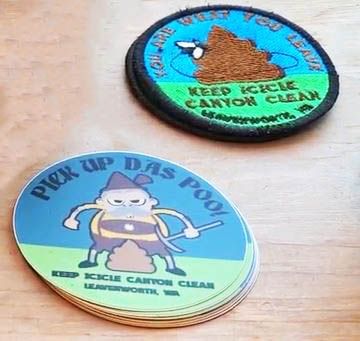 The fun stickers and patches Katie and her friend have created.

A note from the editor: We have continued to hear in 2020 about the huge amount of human poo being found on the public lands around Leavenworth. Let’s all take time to dig a cat hole or use a toilet or pack out our poo so that we can continue to enjoy these wild places.

Katy Pfannenstein has a message for Upper Valley hikers and climbers, and she wants you to wear it.

In 2019, Katy, a Leavenworth wildlife biologist and outdoors enthusiast, got tired of encountering unsightly deposits on her regular outings.

“Specifically, up the Icicle here, there is just a ton of human poop around, and dog poop too. And it was especially bad this spring as the snow was melting out. Just going up the Icicle Ridge Trail or going out by the end of the road where they stop plowing — the goldmines were just popping up everywhere. And it’s so gross!”

Katy says the problem in the Icicle River Valley is pronounced in the early spring, when people start using the trails but have no ready access to restrooms or pit toilets. Often trailheads latrines don’t open until late spring.
So she started her own anti-poop project: A sticker and button campaign urging trail users to scoop up after themselves and their pets. Katy came up with the basic concept, and asked a designer friend, Paul Otsu of Headwaters Studio in Red Lodge, Montana, to create the patches and stickers — for cars, water bottles, backpacks or wherever.

“He came back with the Lederhosen Guy, and I’m like, oh my gosh, this is brilliant.”

She started distributing the goods at Leavenworth shops, like Good Mood Food restaurant and cafe, and taking donations to pay for more. So far, the campaign’s been a hit.

“I want to create walking billboards out of people, because I feel like if people see the message more, they will get the idea that it’s not okay to leave your poop in the woods,” she says. “… “I think it’s an education thing. I just don’t think people are aware that they should not just poop on the ground and walk away from it.”

Katy hopes to start distributing the gear in other locations, like climbing gyms, where people learn to navigate the outdoors, but not necessarily how to leave no trace.

The article and video were originally published here.