White Pass on the Cheap

Most journalists are not well paid. I, for example, benefit from rummaging through city trash bins looking for aluminum cans whose shiny metals can double my earnings. My skinny wallet existence means vacations are always a challenge. A typical pitch to my wife goes something like this, “What do you think, Dear? You wanna visit Othello or Prosser this year?”

Recently a ski buddy mentioned that he had skied White Pass, on the cheap, thanks to the five “free” days of skiing allowed there if you’re a Mission Ridge Season’s Pass holder. That had my antenna up because “free” lift tickets at a different ski area registered high on the affordability scale of an outdoor writer. Before my wife could suggest a really expensive early-February mini-holiday to some place exotic like the Tri Cities, I made a tactical first strike. “What do you say we celebrate your birthday by skiing White Pass for a few days?”

Jan was delighted to do anything that got us away for a few days and White Pass sounded like Europe compared to the options I normally pitch.

A week later we drove a few hours to Yakima and then most of the way to the pass where I had booked a room at an inexpensive motel serving as home base. We planned to ski the area on a Friday and Saturday, because the outdoor writer wanted a Jekyll-and Hyde look at the mountain on both a weekday and weekend.

Our Friday visit coincided with the deliverance of four inches of new snow. Despite being a powder day on the mountain, the crowds were light enough that visitations may not have covered the ski area’s bills that day. This tragedy for the resort was good news for visitors like us who enjoyed run after run through the Expansion Area on the backside of the mountain in Paradise Basin.  Some locals also call the Expansion Area the ‘New Area’ of the resort even though the two lifts serving the 760 acres of terrain here are now seven years old.

As a tree-hugger, I’m often chagrinned by the way Western resorts create ski runs by clear-cutting big swaths down their mountain. Eastern resorts frequently employ a more sensitive approach to their ski trails by keeping them narrow and, often, by taking out some, but not all of the trees.  This means some Eastern resorts looked like thinned forests whereas a Western resort is more apt to look like a colossal octopus with boneless white arms that has attacked a mountain top. To their credit, White Pass used the sensitive Eastern approach to run cutting in the Expansion Area. Some trees had been removed to open up the canopy so skiers won’t become bark eaters or hospital visitors, and yet the conifers here have been treated like valued elders of the hill, not skiing detritus to be eliminated.

The ski runs in the Expansion Area were of very modest steepness yet the sensation of floating on powder while cutting smooth turns around the fat trunks of hemlocks and the skinny canopies of spruce was serious fun. Run after run our route through the trees would differ slightly, but each time threads of uncut snow revealed themselves to us.

After hours of this Jan’s legs were wobbling. We broke for a late lunch (a sack lunch, of course) and then Jan opted to read her book in the day lodge beside the fireplace where trophies honoring the winners of the Mahre Cup over the past 20 years adorned the mantle place. White Pass was the home hill of the Mahre twins, two of the winningest ski racers in American history, so why not soak in their aurora awhile?

I headed out to sample the steeper lines on the ‘old’ side of the mountain. As a college student I skied this hill occasionally and I wanted to reacquaint myself with some of the lines I formerly enjoyed: Mach V, Execution, Hour Glass, Chair Run, and Roller Cliff. Even though aging is a game of loss – lost strength, lost power, lost speed — it was rewarding to see better technique compensating for these losses. I could no longer ski these steep lines as aggressively as I did forty years ago, but in the Gray Years I skied these steeps more gracefully than I had during my Golden Years. That added a glow to the end of the day — not everything about the years sliding under the ski bases was downhill.

Saturday brought an altogether different energy to the mountain. A good chunk of Olympia, Tacoma, and Yakima had arrived to ski yet another four inches of snow that had fallen overnight. The lodge and lifts all bulged. Jan and I quickly left the crowded front side of the mountain looking for serenity back in the Expansion Area. Serenity was not to be found on the Couloir Express Chair we had spent hours skiing the day before. This high-speed quad had sprouted 15-minute lines for a ride that lasted several minutes and a descent that took us six or seven minutes to complete. We called that crummy math and went searching for better numbers.

The nearby Basin Chair serviced some of the same terrain in the Expansion Area, but because this fixed-grip chair felt painfully slow compared to the nearby express chair, the crowds were ignoring it. The chair’s slow speed proved to be more illusion than a reality. With no line, the six-minute ride to the top constituted good math. Furthermore the powder fields that the chair serviced had fewer skiers exploring them. Once again, even though the pitch of the terrain was modest, the exhilaration of powder skiing through the trees was not. We finished every run with Jan exclaiming, “That was so much fun!”

By lunch, Jan’s thighs were shot, so she took to her book again while I took to the steeper treed runs on the west side of the resort serviced by Chair 4, an ancient double chair installed during the resort’s Paleozoic Age. Again, because impatient skiers were unwilling to suffer a slow chair, there were no lines and few skiers enjoying the adjacent terrain. I took four laps through the trees bordering the chair, finding abundant fresh turns on every lap. Sure, others had found some of the same powdery bounty, but I kept happening upon fresh sheets of snow between the trees where I could scratch my signature.

Later that day, as we made the three-hour drive back to Wenatchee, we compared notes. “I’m glad Mission Ridge is our home hill — it feels bigger and more diverse,” Jan said. “But it was super to get away and ski something new. Where are we going next?”

For a minute panic seized me. How could the skinny wallet of my profession afford the decadence of more travel before this decade was done? Then I remembered another perk connected to the Mission Ridge Season’s Pass. “You know a little mini-vacation to Spokane might work. I’ve heard the skiing at 49 Degrees North is way better than the skiing in Switzerland.”

Map: See map below for more information. (Larger image of map in link below)

Access. The drive to White Pass takes 3 hours from Wenatchee. Naturally that’s speed-limit driving because writers cannot afford the poor-mileage cost of speeding. Drive to Yakima; then take Highway 12 west to the pass.

Lodging. We stayed at the Silver Beach Motel (509-672-2500) because it was only a 12-minute drive east of the ski hill. The rooms are rustic but clean — and they are cheap ($69/night). After a busy day of skiing all we really needed was a shower and comfortable bed, which these rooms offered. The White Pass Village Inn (509-672-3131) rents rooms and condos situated a few-minutes’ walk from the ski lifts. Weekends are typically sold out months in advance, but weekday stays can often be booked on short notice. Rates are high. Yakima, an hour’s drive east of the resort, and Packwood, a half-hour’s drive west of the pass, offer a wide variety of lodging options. See this Trip Advisor listing for for a much more complete list of properties.

Miscellaneous. Nordic skiers can enjoy 18 kilometers of groomed trail  through the old-growth forests flanking White Pass. Alpine skiers wanting a real workout can use their lift ticket to ski the Nordic area after the lifts close. Night skiing takes place at the pass on Saturdays. 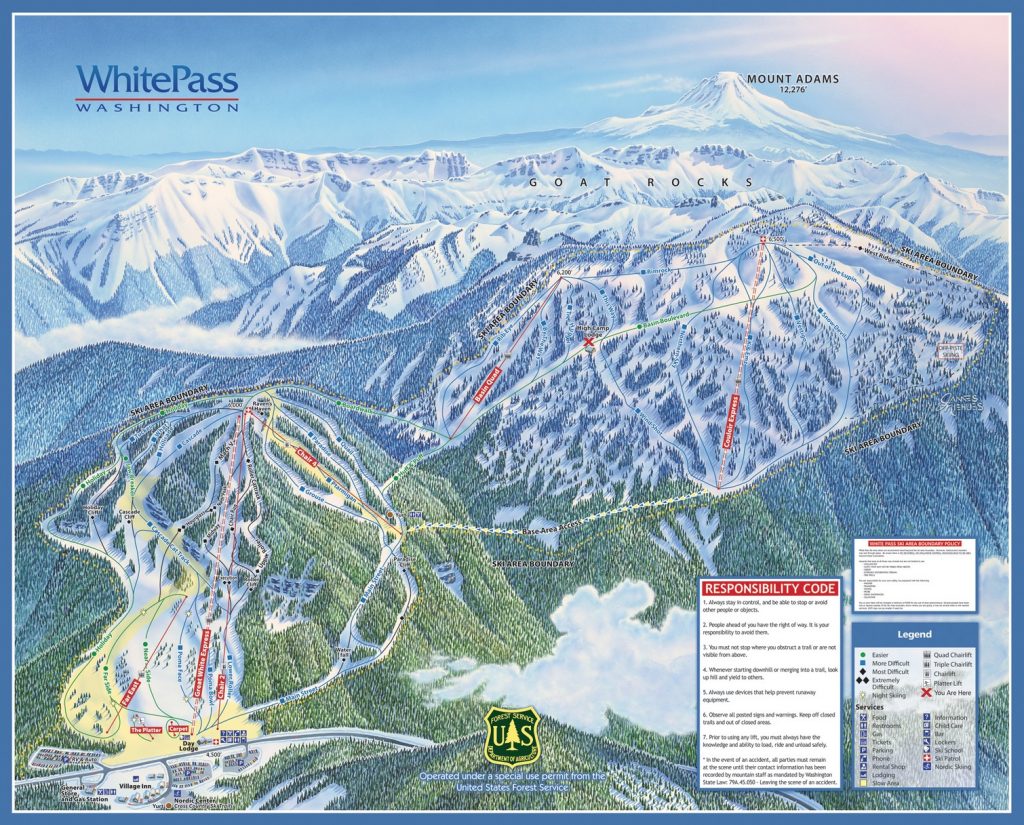