With longer days and melting snow, the earliest of the wildflowers have begun their show in the foothills of Chelan County. To the west of the Wenatchee Valley on the Sage Hills Loop and other areas, many beautiful species are coming into full bloom. Take a walk on this loop (please leave your mountain bikes at home until the trails have dried and fully hardened) and use this article as a guide. You might need to kneel to appreciate these tiny residents of the sagebrush steppe. 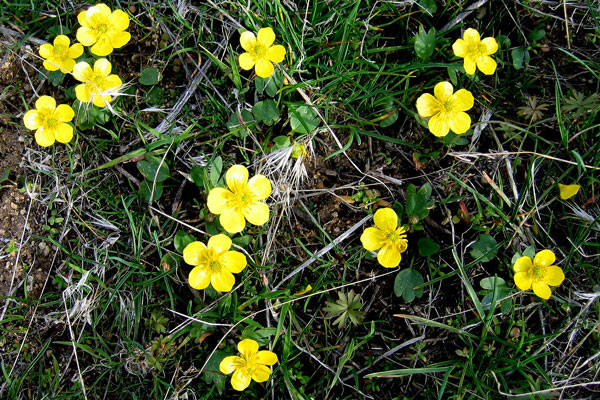 Earliest to bloom in spring is the Sagebrush Buttercup (Buttercup family, Ranunculus glaberrimus). Most buttercups are aquatic or semi-aquatic but our representative is one of the few tolerating dry conditions. The shiny, gold flowers are held on very short stems about 3 inches high. The bright green, waxy leaves are lobed, completely hairless and are the most reliable way to identify this plant. A very widespread little wildflower, it can usually be found growing under living or dead sagebrush or bitterbrush and extends even into the Ponderosa Pine forests and piñon-juniper woodlands.

Usually one or two days behind the Sagebrush Buttercup is the Yellow Bell (Lily family, Fritillaria pudica). A tiny yellow lily that blooms very early and lasts only a few days, Fritillaria stands only inches tall. It is fairly common, flowering under sagebrush, but never found in abundance. The yellow-orange petals and sepals hang down, hence the name. Yellow Bell is a widely traveled species that can be found high in the mountains in open forests and rocky meadows. Floral parts in the Lily family occur in threes (or multiples of three), and the Yellow Bell has three yellow sepals, three yellow petals and three anthers. A few inches down in the soil is a small, delicately symmetrical bulb.

Next on the early spring program is the Blue Bell (Borage family, Mertensia longiflora). As you have probably guessed, this beautiful little blue flower is not related to the Yellow Bell in the Lily family. Blue Bell does, however, like to grow in similar habitats as its yellow namesake but flowering times differ by one to two weeks. One of the few really “true blue” flowers, the buds appear pinkish, mature to sky blue with a touch of magenta, and finally fade to dark pink. As with most plants, an occasional color break will be found, like the white specimen on the right in the lower photograph. Blue Bell ranges from the sagebrush zone into the Ponderosa Pine belt.

One of the most evocative of names, Shooting Star (Primrose family, Dodecatheon pauciflorum) flowers appear to be plummeting to earth like a falcon diving full-tilt after prey. Most members of the Shooting Star genus frequent moister habitats (such as alpine meadows and marshes) than our sagebrush steppe. This species is generally found on north-facing slopes. Sometimes it can be found on road cuts receiving only a few hours of sun exposure each day. A number of related species are found at higher elevations.

One of the first flowers to appear in the eastern Cascade foothills is the Glacier Lily (Lily family, Erythronium grandiflorum), a showy and well-traveled constituent of the eastern half of our state. When Glacier lilies bloom, they don’t mess around–they get down too it and flower by the bazillions. Glacier lilies begin their opulent show right above the foothill communities of Leavenworth, Twisp, Mazama, etc. in late March and early April. As the snow melts up high, they’ll be found all the way up to timberline, as the above photograph of the meadows below Cutthroat Peak depicts.

Also called the Wood Trillium or Wake Robin (Lily family, Trillium ovatum), Western Trillium is one of the first flowers found in the damp, wooded areas of Chelan County such as the far end of Lake Wenatchee or shady parts of Icicle Canyon. As with other members of this family, the flower parts (and even the leaves) are in threes or multiples of three. The petals open white but turn magenta with age. Trilliums are generally small plants, 6 to 10 inches tall, but in fertile soils can develop into large caricatures of themselves, growing up to 24 inches in height. In coastal Washington, the fertile soils support extensive pure stands of Trillium ovatum. One botanist has observed a pure stand of the species comprising at least 50 acres. Western Trillium is most common at low elevation but is sometimes found in the middle ranges.