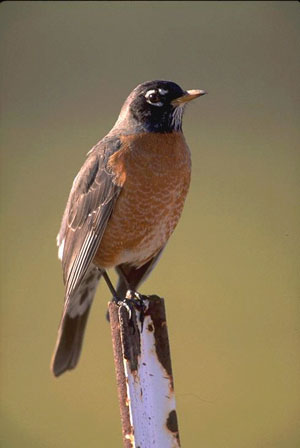 It is difficult believing one crazed bird could vacate its bowels with such vulgarity and regularity that each square foot of the porch and every square inch of the window sills have been blotted with intestinal treasures. Yet after nine days of travel, we return from spring vacation to the indignity of elderberry strudel spewed like spackle across swaths of our house.

This is the second spring in a row that a robin, probably the same demented flying dinosaur, has converted our castle into a sewage plant. That’s one spring too many, “I’m buying a pellet gun,” I tell my wife as I head for the door.

Jan, worried about how a little squirt gun of diarrhea has kindled such a flame thrower of anger, tries to put Mr. Hyde back in his box, “Let’s just hang fishing line where the robin likes to sit? “

“We can’t string the whole cussing house,” I shout pointing to the 2,000-square-foot mess smeared all around us. I head out the door. “I’ll bee bahk,” I tell her, speaking Terminator tongue.

Unfortunately my anger is magnified by ignorance. I find out later that when robins decide on nest sites, the surrounding territory is aggressively protected against other birds during the breeding season. Males, all pumped up with testosterone, pronounce in song, “This is where I mate with my mate, Mate. Make yourself scarce or I’ll break your beak.”

Sadly male robins don’t ‘get’ the concept of a reflection, so its sees itself as an intruder in every house window and, in a surprisingly human way, becomes its own worst enemy. In this case, however, the bird actually has a worse enemy. For a few days a game of cat and mouse, or popper and pooper, takes place. Robin seems to have an antenna sensing bad vibes — whenever I walk outside with weapon in hand, he floats away to a perch too far. Twice I squeeze off shots, Hail Mary rounds really, that through dumb luck might find the mark and smote the tweeter. They miss but must sing a fearful song of doom as they zing by because Passeriform Poop moves even farther away after each shot.

When my daughter, now living away from home, hears of the war waging in our yard, she is confused. There must be an alien possessing her father. She sees a side of me that clashes with my admire-and-protect, love-diversity, respect-nature sermons.

About the mess outside she reminds me, it took all of 20 minutes to clean the porch and window sills when the bird fell off its hormone high last year. “You’ve already spent waaay more than that hunting him. That sound like a wise use of time?. Oh…and is what you’re doing right by nature?”

Of course she’s right, but the father resists parenting from the child. I hang up the phone, grab the pellet gun, and poke the barrel out of the bedroom slider. From my bedroom blind, I have a commanding view of the backyard where Robin Poopbottom occasionally lands to hunt worms. “And the hunter shall become hunted,” I whisper sighting my eye down the barrel.

I aim the gun at the paper-plate pigeon I have staked in the backyard to create a territorial dispute for fair robin. I’ve given the head of my albino decoy a jaunty tilt. When Monsieur Robin hops 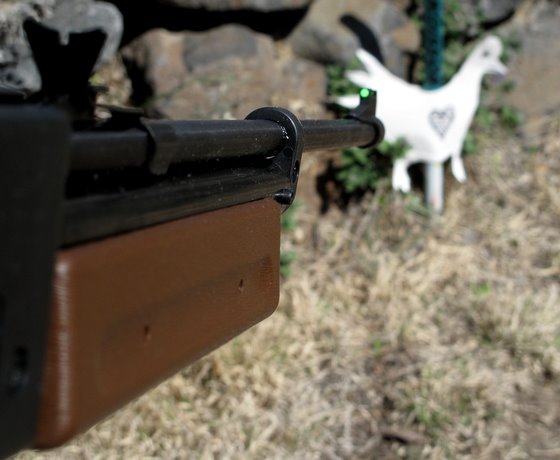 alongside and cocks his own head to look his paper nemesis in the eye, it will be the quizzical look of death staring back at him. I’ll have the gray-feathered septic tank in my cross hairs and victory will be mine.

Admittedly some of a robin’s nature can annoy, but much of its nature can also please, amaze, and educate. It’s the robin’s nature to sing, fly, and migrate. Here is a 2.5-ounce flying sausage with the lightness of bone and the strength of breast to navigate the sky at speeds of an electric car and to travel thousands of miles twice a year. The bird may lack the logic to understand the concept of a reflection, but inside that marble-sized skull he sees as well as humans, hears far better than we do, processes motion better, and reacts with faster reflexes. He can hear vibrations in the ground and, with an accurate peck of beak, spear a buried earthworm. And somehow that pellet-sized brain holds a sophisticated navigation system that uses a combination of sun, stars, and smells that can lead him thousands of miles south in winter and return him to this very pooping porch in spring. That’s a biological system that’s far more sophisticated than the heavier, chunkier GPS I own. How does such a compact package accomplish all of this?

As a specie, we’re fascinated by our own cleverness and the devices we build. But compare a beloved icon, say an iPod, to this robin I was so anxious to plug. The iPod can’t feed itself, move on its own, or reproduce to give me a free iPod. Heck, it can’t even find me a free song. It can’t fly, hop, see, hear worms in the ground, collect heat from the sun, or duck under a branch to escape rain. It can’t power itself by catching ants, beetles, termites, grubs, and worms. It can’t migrate to escape snow in winter or fly back to fertile feeding grounds in spring. If you lay it in front of a rolling car tire, the iPod will get pancaked rather than move an inch to save itself. If I line up an iPod next to my paper pigeon and then noisily open the slider of my bedroom blind, it won’t fly fearfully away. It will dumbly play a cheerful song from Glee while I terminate it with a pellet.

It takes one assembly line a few minutes to build a fully functional, although ridiculously untalented iPod. Every assembly line on Earth working every minute of every day can’t produce an elegant robin.

Next to a robin, the iPod is a severely overrated piece of garbage. Why would I give two hoots about it in a world full of birds? More importantly what was going on inside my head — what madness possessed me — when I wanted to snuff the marvel of Robin Strudeldoodle?

The mindset that had me wanting to shoot my winged neighbor for his crazy behavior was self-indulgent and misguided. The actual act, meanwhile, would have been illegal. Robins, and about 800 other migratory birds moving around North America each year, are protected from such indiscriminate hunting under the Migratory Bird Treaty.

This article was originally published on 4/19/11.