Search
The Neurological Rewards of Runout
by Mark Shaffer 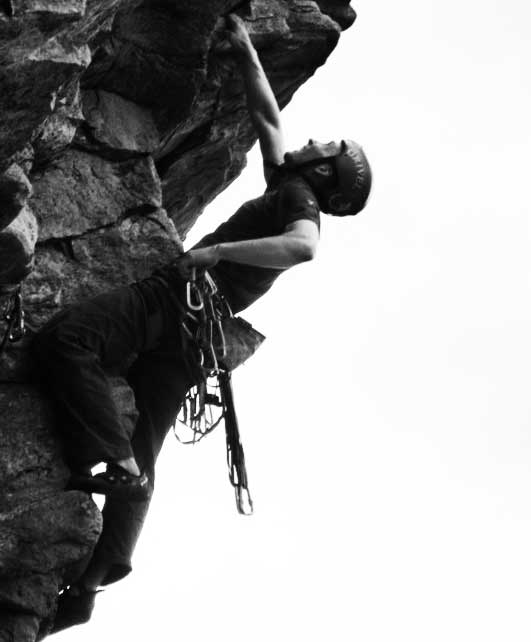 Mark Shaffer getting ready to clip the next bolt on a stiff route.

As your legs start to shake and your forearms ache, you glance nervously at your last piece of protection that is uncomfortably far below you. You analyze your potential fall and desperately wish that you could place a piece or clip a bolt before having to commit to your next move. You chalk up, search uselessly for a better handhold, than chalk up again. Knowing that you have nearly exhausted your endurance and that your next possible protection is still above you, you summon all remaining strength and climb on.

If this has ever happened to you then you know that climbing a route with a bolt every 3 feet is an entirely different psychological experience than climbing a route with sparse protection. In the Journal of Sports Sciences, researchers analyzed climber’s hormonal response to these two very different climbing situations. The study split the climbers into two groups; one of which would be allowed to clip every piece of fixed protection as they climbed and the other of which would be only be allowed to clip every other piece of protection. Therefore, the potential fall would be twice as far for the second group as compared to the first. The researchers analyzed various catecholamines (which is one group of neurotransmitter) in the climber’s blood before, immediately after, and 15 minutes after climbing to see what effect potential fall distance had on specific hormonal levels.

The researchers found that the climbers with the longer potential fall had levels of noradrenaline that were roughly 1.5 times higher and dopamine levels that were roughly 2.5 times higher than the group with the smaller potential fall. Noradrenaline is a hormone and neurtransmitter that mobilizes the body for action, increasing blood pressure and heartrate. Dopamine is known as the reward neurotransmitter, and is closely associated with pleasure and mood. Dopamine is typically released in response to eating, sex, or using certain addictive medication. The authors concluded that a greater potential lead fall distance is correlated with a larger catecholamine release.

It may be, therefore, that the number of bolts or pieces of protection on a route affect the way you feel when you reach the chains even more than the route itself.