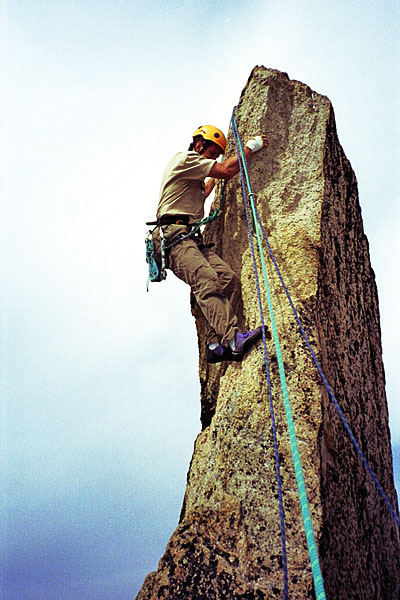 There’s evidence from all quarters that Americans work too much. Contrary to what our bosses say, this isn’t necessarily a good thing. In fact, it’s can be bad for one’s health and one’s happiness. Now evidence indicates that working too much is also bad for the environment. So if you need an excuse to go hiking, climbing, or biking, do it because you want to help save the planet. What goal could be loftier?

EXCERPT: DAVID SUZUKI’S GREEN GUIDE
Why happy people are good for the planet

The main reason many people give for not doing more outdoor activities and other things they enjoy is that they’re too busy. 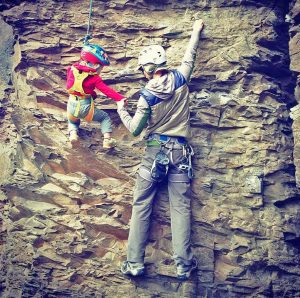 Mark Shaffer climbing with his daughter when she was about 2 years old. Picture taken at the Feathers, Vantage WA.

Indeed, Americans work longer hours than citizens of any other wealthy industrialized nation. In 2006, the average American worked 1,804 hours, or 370 hours more than the average German. That’s 10 extra weeks of work (or holidays, from the German perspective) every year. Canadians aren’t far behind, working an average of 1,738 hours annually.

If you’re time-poor because of work or other obligations, then you’re much more likely to drive than cycle or take transit, more likely to eat fast food or junk food than prepare a healthy meal, and more likely to buy inefficient or potentially toxic products (you lack the time to do any research).

When people are time-poor, they have less time to spend on the activities that create happiness, such as socializing with friends, pursuing hobbies and engaging with their communities. People are working harder and harder to amass more money and material wealth, yet the evidence is clear that this is a fool’s quest, providing little or no additional happiness while undermining the very qualities that make life worthwhile.

American happiness has declined since 1957, despite people earning over twice as much money (in real terms). It’s no coincidence that since 1957 the divorce rate has doubled, the teen suicide rate has more than doubled and the rate of mental illness has skyrocketed.

Social scientists confirm what many people already intuitively understand: Happiness comes not from money but from relationships, community, trust, and having a sense of purpose in life. The activities most likely to create happiness – time spent with family and friends, outdoor activities, sports, music, literature, dance, theatre and all manner of artistic endeavours, creative hobbies and lifelong education – generally have modest ecological impacts.

Why does happiness matter from an environmental perspective? The reason is that happy people are more ecologically responsible. Happy individuals tend to be more focused on personal growth, relationships and community involvement than on money and possessions. Happy people also tend to be more mindful, meaning that they are more attuned to their own inner state and behaviour, including the ecological consequences of their actions. We can own fewer goods, but gain more satisfaction from them. We can reduce our carbon emissions, but have more fun. We can travel shorter distances, but enjoy life’s journeys more.

We can spend more time enjoying nature, and less time destroying it.

We can eat local organic food, and feel healthier. We can live in small but comfortable houses that feel more like home. We can build denser neighbourhoods that offer more green space for exercising, playing and relaxing. The key is to be better, not bigger.

As Mark Anielski, author of The Economics of Happiness, concludes, “it is indeed possible for those of us from more affluent nations to achieve a high quality of life with a smaller ecological footprint.”