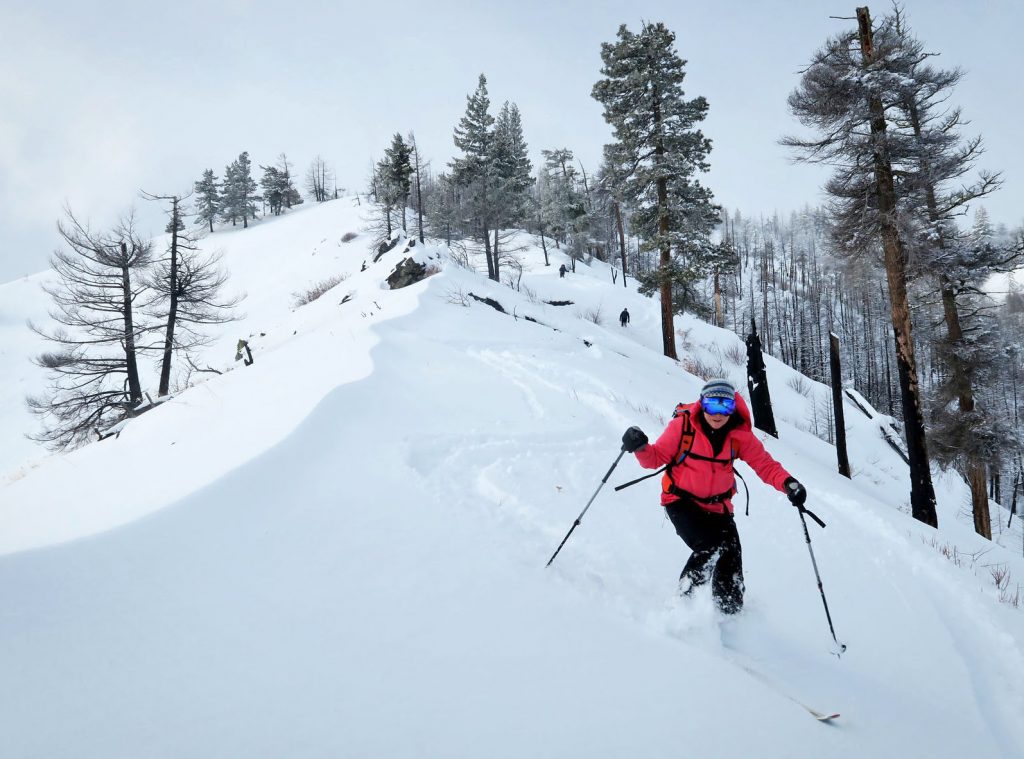 Patti Janisch skiing the shady side of the East Ridge.

The unexpected snow blanketing Wenatchee over the evening changed everything. The intended route up Angle Peak in the Entiat drainage— picked because we thought the avalanche hazard would be low— is suddenly off the tables. Now, parts of that route will sport dangerous depositions of wind-loaded snow. At our 6 a.m. meeting spot, our group recalculates. Given this windfall of new fluff there just might be adequate coverage for a south-to-north traverse of Twin Peaks, a ski tour that’s often only feasible a few days each year. And given the shallow snowpack over the Wenatchee foothills, we’re actually more worried about hitting rocks than starting avalanches.

With a new location calibrated to the day’s conditions, a few members of our group rush home to pull out their rock skis— matching gear to expected conditions is also an important requisite for a successful tour. We reconvene at the top of Number Two Canyon Road and ski 1.5 miles to the head of ‘the Meadows’. Here we leave the road, following direct slopes and ridges to the top of the Western Summit.

The west-facing slopes below the summit have a foundation of plasterboard dense snow covered by seven inches of powder. We rip skins and braid turns through glades of wind-twisted Douglas firs and sun-loving ponderosa pines. We disturb the area’s calm with embarrassingly childish whoops. About 800 vertical feet lower, the vegetation thickens into impenetrable stands of second growth. We re-apply the skins, climb back to the top, and traverse over to the twin’s Eastern Summit.

The wind is strong on this summit. We strip skins quickly, slide downhill toward the peak’s East Ridge, and drop below the jets of brisk air blasting the summit. Fog partially obscures the surrounding hills but the gray blanket has broken apart enough to reveal blue segments of the Columbia River far below. Ridges often offer ‘interesting’ skiing because the snow on the shady side of a crest is completely different than the snow on the sun-side of the crest. In this case, we enjoy soft powder turns in the shade but occasionally smack underlying rocks when obstacles force us onto sun-soaked portions of the ridge. We praise our rock skis. 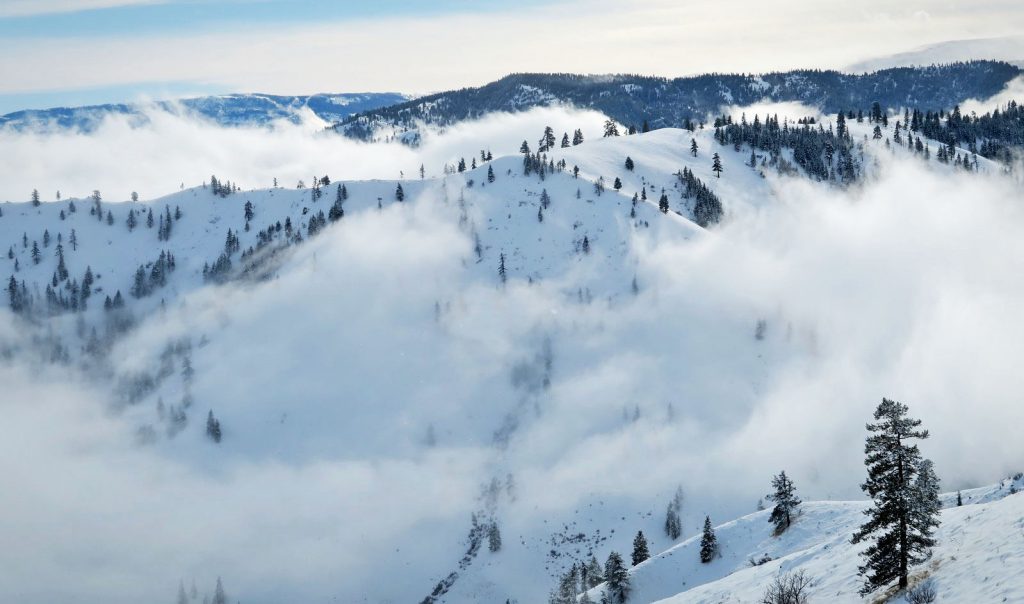 The foothills peeking out of valley fog. 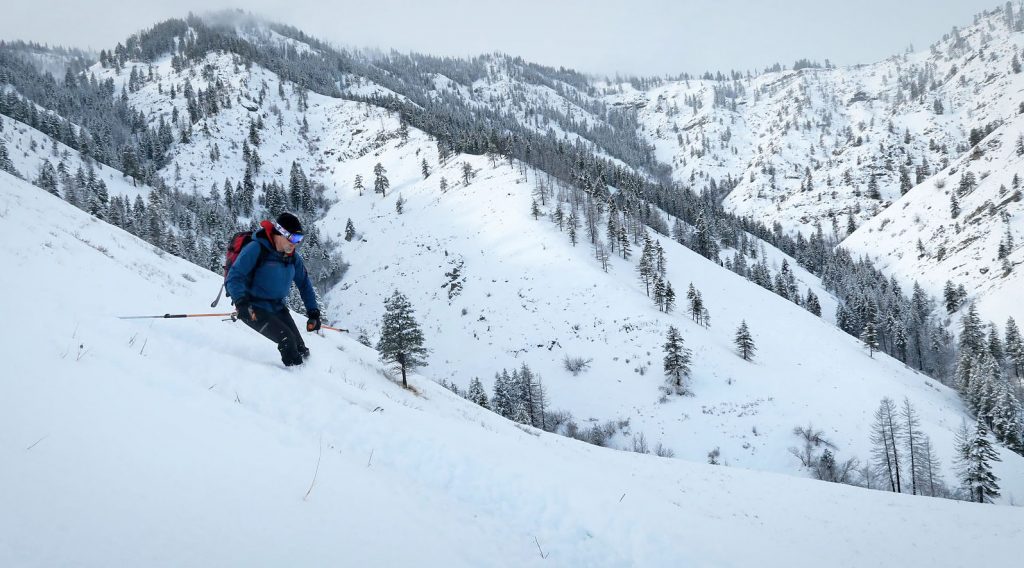 Kyle Flick skiing into the Heart of Darkness.

Eventually, we exit the ridge and descend north-facing slopes leading into a small valley we call ‘the Heart of Darkness’. By wings, we are only four-miles from downtown Wenatchee. If you broke your legs on a solo jaunt back here, however, it would be decades before your bleached bones were stumbled upon.

The day unwinds, the temperatures warm, and winds accelerate. We skin uphill and then traverse north toward Fairview Canyon and Butler Ridge. The wind is so strong it nearly flattens us several times. On some of the lower elevation roads leading down and out of the foothills, tumbleweeds roll by like balls looking for the pins of hapless people to bowl down. The snow responds to the warm wind — it nearly evaporates before our eyes. On the final stretch of road marking trip’s end, six inches of morning powder has melted down to an inch of afternoon glop. Suddenly even the glop is gone and mud coats the final 1.5 miles of our route. 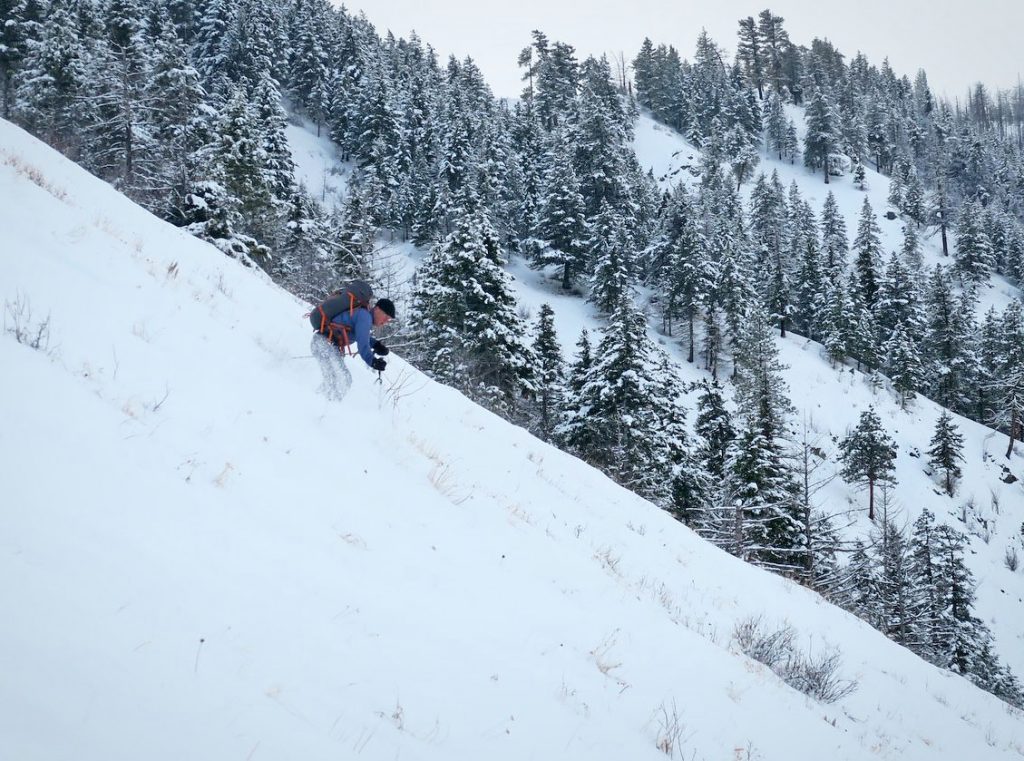 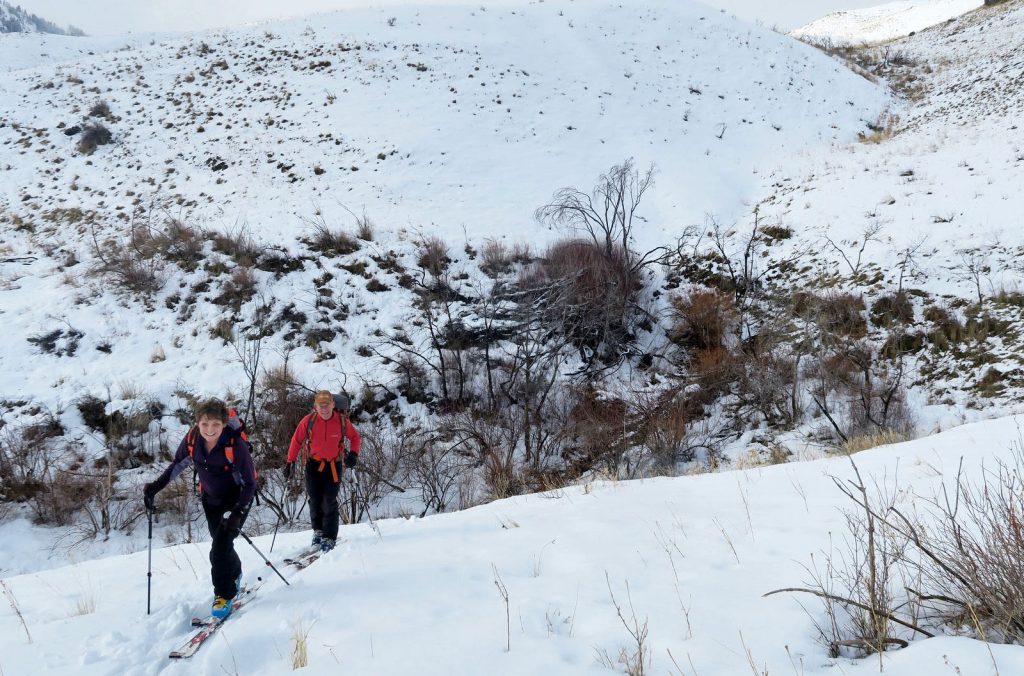 Racing to beat the melting snow.

We talk about the day as we walk. Our willingness to evaluate conditions before defining our location kept us safe. It also gave us the chance to ski country that only comes into shape a few days a year. What we traveled today will not be available to tomorrow’s adventurer searching for a safe place to ski or snowshoe. That, of course, is the ongoing reality of winter travel – conditions can change fast (and radically) from day to day.

Central Washington is blessed with its easy access to a handful of areas with markedly different snowpacks. A storm dropping a foot of snow at Stevens Pass often drops seven or eight inches of snow on the peaks bordering the Icicle River Road, four inches at Blewett Pass, and three inches at Mission Ridge. Throw in the lower-elevation foothills surrounding some of these destinations, and skiers and snowshoers can almost always find safe places to explore, even when the avalanche hazard is ‘high’ in the high mountains.