Fields of erratics… if you glaciate it, they will come.

The ice ages of the Pleistocene Epoch 2.6 million to 11,000 years ago had a dramatic role in shaping surface and the topography of North Central Washington. Of particular fame are the impacts of the Ice Age Floods where many of the largest floods the planet has ever seen washed over our lands and put the finishing touches on many of our canyons, coulees, and scablands. Immediately north of our dramatic coulee country, the Okanogan Highlands felt the impact of glaciers in a different way. Here, the Okanogan Lobe, an appendage of ice extending south from British Columbia and Western Alaska’s Cordilleran Ice Sheet, both scoured the lands beneath its frozen mass and deposited great loads of rubble being bulldozed by the glacier’s leading edge.

On this ride, you’ll see topography shaped by ice that was once thousands of feet deep. You’ll see the many miniature depressions and basins (kettles) scoured into the softer ground of the highlands. You’ll also see places where the glaciers formed rounded hills because the hard bedrock close to the surface resisted the ice bulldozers.

After the heyday of glaciation and periods of warming had the ice in retreat, massive amounts of glacial till (dust, sand, gravel, rocks, and boulders) transported by the glaciers were deposited in new areas. You’ll see huge boulders (erratics) that look out of place because… they are out of place! When all the ice melted, the boulders picked up in one place were strewn randomly and abundantly around new places.

This ride is also well-endowed with scenery. You’ll enjoy views over the Okanogan and Columbia river valleys at the start; Montana-like, Big-Sky Country in the middle; and the uniquely basaltic canyon country of the Pacific Northwest at the end of the ride.

Even though the technical nature of this route is not taxing, this is a ride worth taking.

Note: The dirt roads traveled for this ride are wide and easy to ride, but in total there are several miles of roads with loose sand or thick gravel where cyclo-cross bikes will struggle. However, depending on the variations of the ride chosen, you may also have up to about 14 miles of pavement where mountain bikes will lag. Regardless of the bike chosen, you’ll wish for a different bike at times. Our recommendation is to err toward safety and use mountain bikes – better to take your lumps by going slower than by flying over the handle bars when thin tires burrow into soft sand.

Map. See our topo map of the route.

Trip Instructions (starting from the top of the Snyder Flats Cutoff Road).

Road and Land Ownership.  The route follows county roads and a state highway. The lands bordering this ride are part of the Colville Reservation.

Various periods of glaciation occurred during the Pleistocene Epoch and the Cordilleran Ice Sheet covering most of British Columbia and Western Alaska at these times was thought to be 4,000 feet deep. Different lobes of ice extended south into Washington State and the Okanogan Lobe smothered much of Okanogan County east of the Cascade Mountains and west of the Kettle River in this portion of the Colville Reservation called the Okanogan Highlands.

Once the ice retreated, colossal amounts of sand, gravel, and rock bulldozed by the glacier were deposited by the melting ice. Some of this deposition formed big mounds of rubble (kames). Older drainages in the landscape before this period of glaciation  were often plugged and filled with all this glacial debris while haystack-like boulders from afar (erratics) were scattered over the surface in unlikely places. Ice and meltwater were also left in the many depressions carved in the earth by the glaciers and this provided water for the hundreds of little lakes (kettle lakes) found in these highlands.

Disclaimer. Treat this information as recommendations, not gospel. Conditions change and those contributing these reports are volunteers–they may make mistakes or not know all the. If you won’t accept that responsibility, you are prohibited from using our information. This guidebook post is sponsored by Andy Dappen, one of the founders of the WenatcheeOutdoors.org and OkanoganOutdoors.org websites. “It’s an easy ride but fascinating to think of this area being completely covered by a massive ice sheet long ago. Once that ice melted, the glacial erratics that now litter the landscape were left behind.” 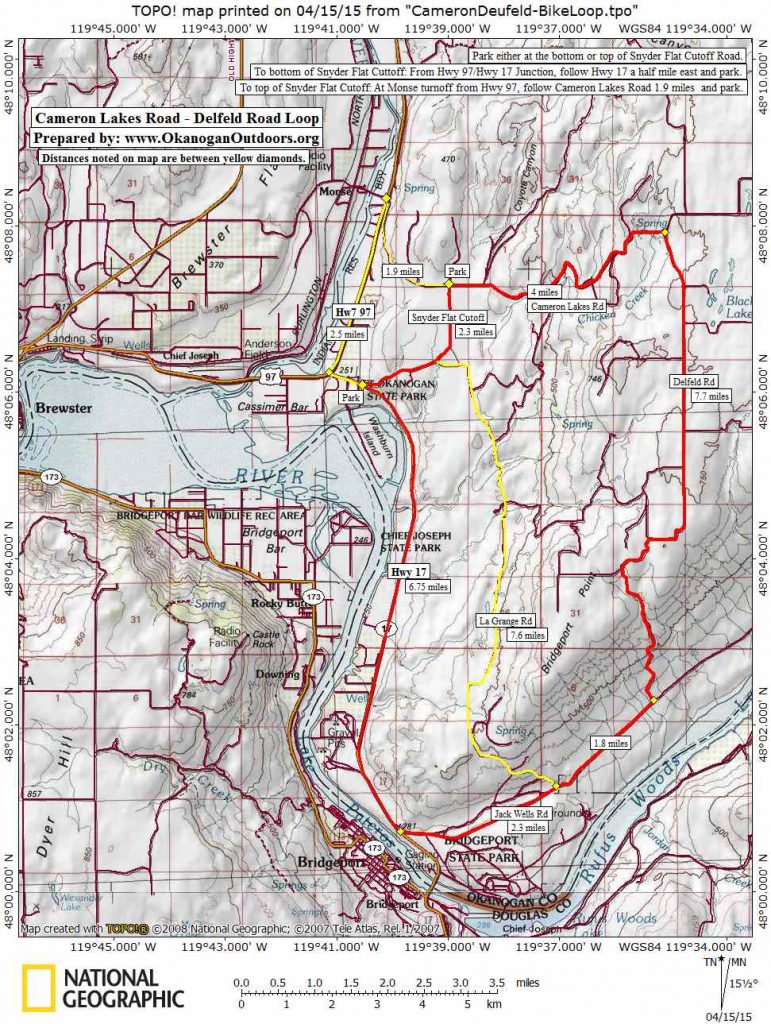