As late as 2010 if you had asked the residents of Plain, Washington to develop a Nordic skiing culture they’d have said, ‘Forget about it.’ If you wanted to ski groomed Nordic trails, they’d have told you to visit Leavenworth, Lake Wenatchee, Stevens Pass, Echo Ridge or go farther afield to the Methow Valley. But Plain? No way. This was truck and snowmobile country.

That was before, Rob Whitten, the owner of Plain Hardware and a life-long skier, decided Plain didn’t know what it was missing and went to work changing the community’s outlook on Nordic skiing. During the first year of his experiment, he and his employees at the hardware store groomed 8 kilometers of classic-skiing and skate-skiing trails in a large field system across the highway from the store. With a good snowpack that year (2011-12), the trail system operated from mid-November until early April. The trails didn’t exactly light a fire in the skiing desires of locals, but a seed was planted.

Each year since, Whitten has enlarged the trail system by adding new fields to the inventory. Now over a dozen property owners, including Mountain Springs Lodge, Beaver Valley Lodge, and Stonewater Ranch have included their acreage to the interconnected trail system and there are 24 kilometers of groomed trails in a mix that is shaping up to be one of the better regional trail systems. Skiers can loop circular routes around the large fields or they can ski five miles (one-way) up Beaver Creek and the Chiwawa River valleys along the edges of fields and beside creeks. The latter route has the feel of skiing the Winthrop Community Trail connecting Winthrop to Mazama in the Methow Valley.

“We’ve got more property owners willing to be part of the system and that will help us push the trail even farther away from Plain,” says Whitten. “The problem now is maintaining what we’ve got. Grooming everything daily is becoming a bigger and bigger job – especially when you consider we’re a hardware store.”

Selling hardware and peddling skiing aren’t businesses that commonly go together, but Whitten, 53, says it makes sense in Plain. “The lumber and hardware part of the business drops off drastically in late fall and the skiing helps keep the staff employed. It’s also a fun change of pace.”

Of course the existence of groomed trails alone does not make a skiing culture. People need to use and value those trails and Plain, with its agricultural, ranching, and forestry roots, isn’t a natural breeding ground for the sport. Carhartts and snowmobiles are more de rigeur here than Lycra and aerobic activity.

Whitten has attacked this wrinkle in culture by adopting an age-old strategy: Hook the kids. Last year he started a ski team for youths aged 7 to 18 and surprised even himself by attracting 42 local kids to the program. By 2016 the number swelled to 52.

The majority of these youths participate twice a week after school while older participants who are actually racing come five times a week to practice and train. “We have two vans that pick up the younger kids at the Beaver Valley School after class. We bring them back to the hardware store, have a snack, and then go skiing. Parents don’t have to take time off from work to make any of this happen.”

Besides teaching technique, Whitten says they play a lot of games on skate skis like Capture the Flag where kids of all ages are mingling. “It’s fun, so they want to come.”  Whitten and his coaches have also developed a skills park with jumps to go over and wickets to ski under. “They circle around that area over and over without thinking about how much exercise they’re getting or how much technique they’re learning.”

The ski team has a sliding scale for payment and kids are not turned away for monetary reasons. “Sometimes you need to give things away if you want individuals or the community involved,” Whitten maintains. Team members also don’t need to worry about purchasing gear – all of them use the hardware store’s rental equipment, which is sitting idle during the week. “I don’t know if any of these kids would be involved if their parents had to buy them new equipment.” The impact of the ski team has rippled throughout the community. Other local businesses have stepped in to help the effort and parents of greater financial means have helped keep the team afloat. Furthermore, when kids learn to enjoy skiing they drag their parents out on the trail as well. Over the past four years, and particularly over the past two years, an unlikely cast of new local skiers – some who are usually snowmobiling, others who are typically watching football – have taken to skinny skis and are striding around the Nordic trails. Just don’t expect to catch them wearing Lycra — some aspects of the Nordic culture may never make it to Plain.

Season.  Trails open as conditions allow, sometimes before Thanksgiving. They remain open as long as groomers can maintain the trails (sometimes as late as April).  Even during the low-snow years of 2013-14 and 2014-15, the trails operated for about 45 days.

Ski Trails. Plain offers a total of 15 miles (24 km) of groomed trails. Most trails are groomed for classic and skate skiing.  Most trails are gentle and suitable for beginners, but some steeper technical trails have been built to develop the skills and fitness of ski team members. If you want a challenge try the Beaver Hill Loop Trail (2.8 km) and the Cougar Run Trail (1 km). The longest trail is the Beaver Creek Trail (9.5 km, one-way).

Snowshoeing Trails. Snowshoers are not allowed on the ski trails but there are overt 5 kilometers of dedicated snowshoe trails that also start right across the highway from Plain Hardware.

Grooming and Snow Conditions. All trails are groomed daily during Winter. A cross-country skiing group for women that works on classic and skate skiing with a coach but is first and foremost about fun, making friends, and getting outdoors. You can join the group up to 4 times a week between January 6 and the end of February. Details here. Suggested donation: $40 to $100 (all donation support the youth team). 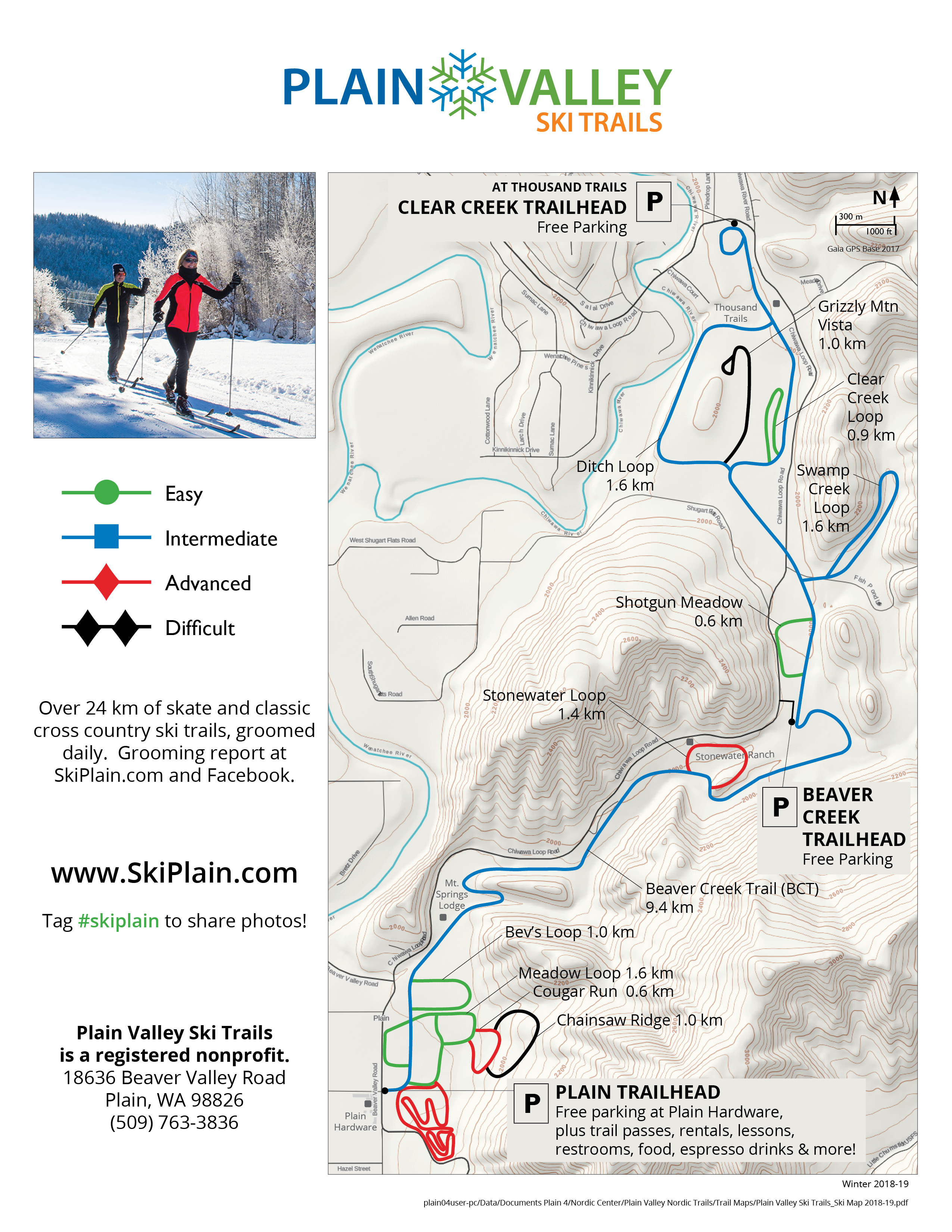