On a warm weekend in early September, Aaron Simmons and I set out from Ingalls Lake to traverse the entire Stuart Range. The big dream was to run the ridges over Stuart, Sherpa, Argonaut, Colchuck, and Dragontail. If we were moving particularly well, we thought we might even walk up and over Cannon Mountain.

Aaron and I hike fast, but we learned on this attempted traverse that being comfortable climbing without a rope on steep terrain is the key factor to reasonable progress on moderate terrain. The difference between our intended itinerary, and what we actually accomplished was the result of my need for a rope – both for moderate climbing and for steep descents.

Every time you set up a rappel, you spend 20 minutes with no forward progress.  At one point on Sherpa, I rappelled while Aaron downclimbed.  He was waiting for me at the bottom.  Unroped travel is faster, and in order to complete this traverse with only one bivy, we would have had to solo (up and down) more, than I was comfortable with. We had an uneventful walk to Ingalls Pass by headlamp and enjoyed the striking reflection of Mt. Stuart in the still waters of Ingalls Lake as we walked past.

We chose to ascend Stuart via the west ridge. This route had special meaning for u because we had done it together in 1986. Then, as juniors in high school, we were unprepared for the exposure we found on the north side section near the top. We named one spot “crybaby ledge” because we had sat together there a quarter century ago, weeping about our impending death and wondering how we’d gotten into this mess.

This time we found the climbing comfortable and fun, although we did use a rope on the upper section.  We met Kyle Flick on the route.  I think he may live on Mount Stuart.  Last time I was here, in May, it was Kyle and Tom Janisch with whom I skied Ulrich’s Couloir.

We summited at 1:40 p.m. still believing we would get over Sherpa and beyond to Sherpa Pass before dark. The travel to the base of the west ridge of Sherpa, however, was slow going and involved one rappel. We didn’t get to the We had seen the repeated up-downs on the west ridge of Argonaut from the summit of Stuart and it looked like it would take at least 5 rappels. At this point we knew we were going to have speed issues and that we didn’t have the time to stay on the ridge as an approach to the west ridge of Argonaut.  We decided it would be faster to climb and descend Sherpa via the west ridge, rappelling the route back to Sherpa Col, and then to walk around on the south shoulder to Sherpa Pass at the west shoulder of Argonaut.  The climb on Sherpa was great.  Aaron led the steep parts and we were on the summit at 5:45 p.m.  It was a treat to climb without a pack. Rappelling the route took longer than the climb.  We were back at the base at 7:30 p.m. and hustled downhill until dark.  We found water and an acceptable bivy spot at 7160’ around 9 p.m. and settled in.

The next morning, we further degraded our itinerary by abandonning the west ridge of Argonaut to avoid the time consuming series of up-down ridge spires. Instead, we traversed under the south cliffy spur of Sherpa and over to the south gully of Argonaut. The top of the gully is quite steep and the summit ridge was a joy.  Argonaut has a great summit.  It was here that I broke out the clams. From the summit, we could see the easy completion of our traverse… but it was 12:20 p.m. and the Argonaut descent was going to take a couple hours.

It was looking bad for summiting Colchuck and Dragontail.  We ended up at Colchuck Col at 3:30 p.m. and decided to pull the plug and head down.  The travel from the Colchuck/Argonaut plateau was easy on the south side of the ridge. We walked down Colchuck glacier, around the lake, and returned to the truck at 7:00 This was a great trip with only two skin injuries–my back (from my pack), and Aaron’s heels.  With as much roped travel as we did, we needed one more night to finish the traverse.  If we weren’t trying to hurry, we’d have done the west ridge of Argonaut and probably slept near the summit.  The third day we could have finished with Colchuck and Dragontail walk-up routes and then walked across the Enchantment Plateau and over Cannon Mountain to the car.  Even without touching all the summits, it was a memorable weekend. trailhead in the Icicle River valley outside of Leavenworth.  Logistics involved help from both our families.  The day before the trip, my wife and two kids followed me from Wenatchee to the Colchuck trailhead where I left my forest pass equipped truck.  They dropped me at Aaron’s work where I picked up his truck to drive home. I left my house at 2:30 a.m. in Aaron’s truck to meet him and his father at Aaron’s house at the north end of town.  I left Aaron’s rig there and his father drove us over Blewett Pass and up the Teannanway to drop us at the Esmerelda Trailhead at 5 a.m.  No extra vehicles anywhere!  Many thanks to our families for the support.

Mike Rolfs and Aaron Simmons have been climbing partners since 1985 when they were in high school. Rolfs is a civil engineer and a partner with Pacific Engineering and Design in Wenatchee. Simmons lives in Sunnyslope and is a construction engineer with at Douglas County Transportation and Land Services.


Leave It Better Than You Found It. This should be every outdoor user’s goal. Pick up trash left by others, pull some noxious weeds along your route, throw branches over unwanted spur trails, don’t ride or walk wet trails when you’re leaving ruts/footprints deeper than ¼ inch… 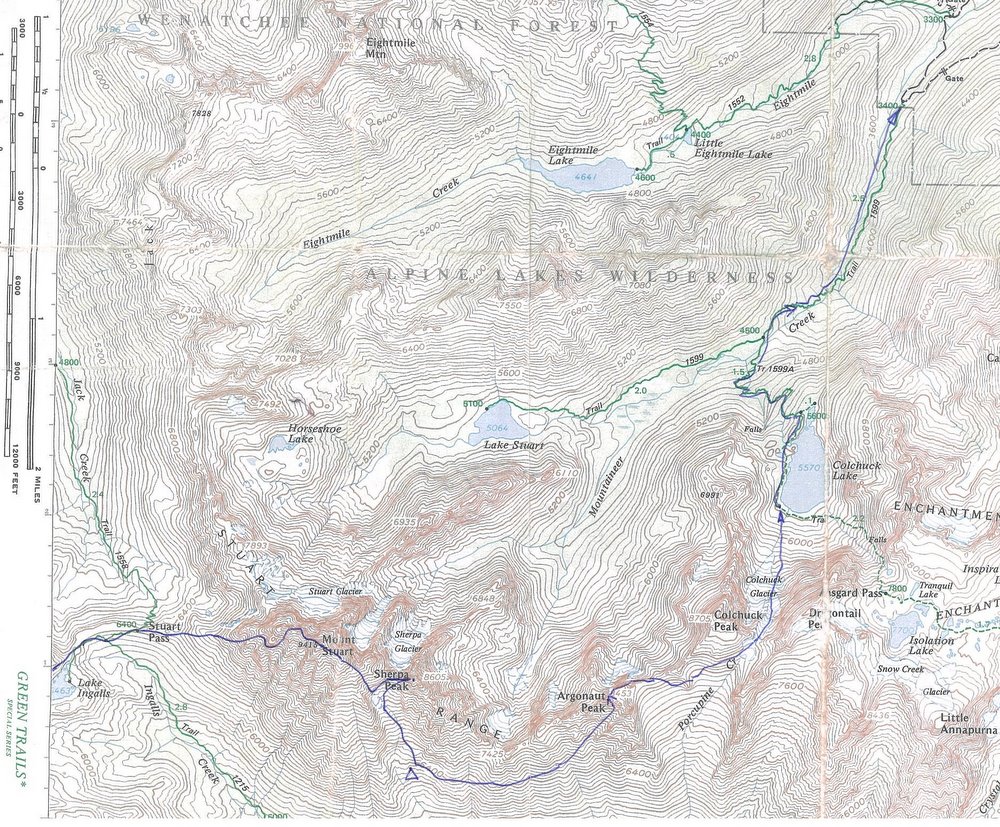