For about a month each winter when a low snow level has settled in over the foothills of the Wenatchee Valley, the road up Twin Peaks makes for an accessible and surprisingly enjoyable winter outing. A 4.2-mile drive up Number Two Canyon Road delivers you to the end of the pavement where the dirt portion of the road begins. No one lives up the dirt road, so the plowing stops where pavement ends. A gate another half mile up the dirt road is usually closed and locked in winter and this keeps fat-tired mudders from destroying the snow (and the road) on all but the first steep portion of the ujnplowed road. Beyond the first gate, the road is usually in nice shape for cross-country skiing, ski touring, snowshoeing, or winter walking and you can carry on for about 4 miles to reach the summit of Twin Peaks.

The terrain along the way varies from quiet, wooded forests to windy ridges with expansive views. The top of the peak is particularly impressive for a place so close to town. On a clear day, you’ll see Mt Rainier to the south, the Enchantments to the west, Glacier Peak to the northwest, the Waterville Plateau to the northeast, and the Columbia River at your feet. It’s not a bad payoff for a little sweat.

While the summit of Twin Peaks will hold snow for most of the winter and long into the spring, the season for skiing or snowshoeing all the way to the top is relatively short. Chinooks following winter snow storms often wipe out the snowpack on the lower miles of the route. If you want to ski or snowshoe the entire way, you need to and grab the route when opportunity knocks. Even when warmer temperatures have pushed the snow level up, however, Twin Peaks is a beautiful and accessible area for a wintertime outing. Throw snowshoes (or MicroSpikes) in the pack and start walking the road system upward — when you eventually walk your way into snow, pull out the snowshoes and carry on to the summit. Photo: Summit views to the east. Distance: Depending on route, round-trip distance to the summit is 7 to 8 miles

Recommended Season: For snowshoes and skis the area is generally best traveled from late December through February.

Access. In Wenatchee, drive south on Western Avenue until it bends hard to the right, and becomes Number Two Canyon Road. Follow Number Two Canyon Road 4.2 miles until the plowed road ends. There is a small pullout (on the south side of the road) at the very end of the road where you can park (elevation 2,535 feet). Don’t park in the larger parking area on the north side of the road — this is private property and cars parked here antagonize the owner.

Option 1: Skiing the main road to the summit. Our topo map will help you follow the road to the summit but here is a brief description. From the end of the paved county road, follow the snowed over road uphill to the second gate. Go straight through the second gate rather than hooking left on Road 7101. Follow the road behind the second gate for nearly two miles until a switchback near the 4,300-foot elevation level. Here, take the right of two roads and follow it as it makes a long traverse under the West summit and leads to the top of the East summit (4,596 feet). A more detailed description of this road is described in both the Hiking and the Mountain Biking guidebooks under Twin Peaks.
This road is the most popular winter route on Twin Peaks and is the best bet for those using light touring gear and flimsy boots. In good snow conditions, those with very flimsy gear (light touring Nordic skis with no metal edges) can ski the road. Once the road gets packed or gets icy, most skiers will prefer having lightweight metal-edged backcountry skis and boots giving you a modicum of control over the skis. No-wax skis are usually preferred for this route and skinny skins will often make the ascent less tiring on the arms.

Option 2: From the end of the paved county road, follow the snowed-over road uphill for about 300 yards. Once the steep sidehill on your right disappears, you can leave the road and follow a true bearing of 348 degrees uphill to peaklet 3,761. From here, follow a true bearing of 315 degrees in a northwesterly direction to the Canyon Number One viewpoint (3,820 feet). This leg is undulating terrain with a little descending, a little climbing—just keep the skins on. At the Canyon Number One viewpoint, the road is about 70 yards away to your left (west). From the viewpoint, follow a true bearing of 330 degrees along the SE ridge to the West Summit (4,620 feet). This bearing will intersect the road once or twice. From the West Summit there are sometimes good slopes to yoyo on the west face that drop 1,000 to 1,200 vertical feet. The top third of these slopes is usually icy or very packed from the strong winds blasting the summit. Lower down, glades protect the snow more.
This route is best handled with telemark gear (light or stout) or randonnee (Alpine touring) gear. I prefer randonnee gear because the peak often has variable snow conditions and shallow snow (there’s more risk dragging a dropped knee through thin snowpacks).

Option 3: Ski up the road per Option 1 for about 1.5 miles. At the end of the big meadow (on your left) and at an elevation of 3,400 feet, the road bends right (to the northeast). Leave the road here and skin uphill following a true bearing of 340 degrees until you reach the SW ridge of the West Summit at an elevation of 3,800 feet. Now follow the ridge following a true bearing of about 15 degrees to the West Summit. Other Options: a) From the second gate, follow Road 7101 over into Mission Creek. b) Follow Road 7101 to the pass at 3,300 feet, go right and follow another road to Waterbar World

Cons / Hazards. Snow amounts vary from year to year. Because the area is not that high, snow consistency is not always good.

Issues. The second gate on the road leading up Twin Peaks has a sign stating, “Closed to all motorized vehicles.” It then shows pictures of a car, 4-wheeler, motorcycle, and snowmobile. Formerly snowmobiles had been allowed past the gate, but that situation has changed and you have every right to politely inform motorized recreationalists encountered behind the gate that they are not allowed here. If you do encounter motorists back here, keep the conversation friendly — most motorists are out enjoying themselves and polite discourse will discourage them from revisiting. Leave It Better Than You Found It. This should be every outdoor user’s goal. Pick up trash left by others, pull noxious weeds along your route, disperse old fire rings (they encourage more fires), throw branches over spur trails and spurs between switchbacks (make it harder to do the wrong thing than the right thing).

Important Disclaimer: Treat this information as recommendations, not gospel. Things change, conditions change, and those contributing these reports are volunteers–they may make mistakes, fail to give complete information, or may not know all the issues affecting a route. So forget about finger pointing: If things go wrong, you are completely responsible for yourself and your actions. If you can’t live with that, you are prohibited from using our information. 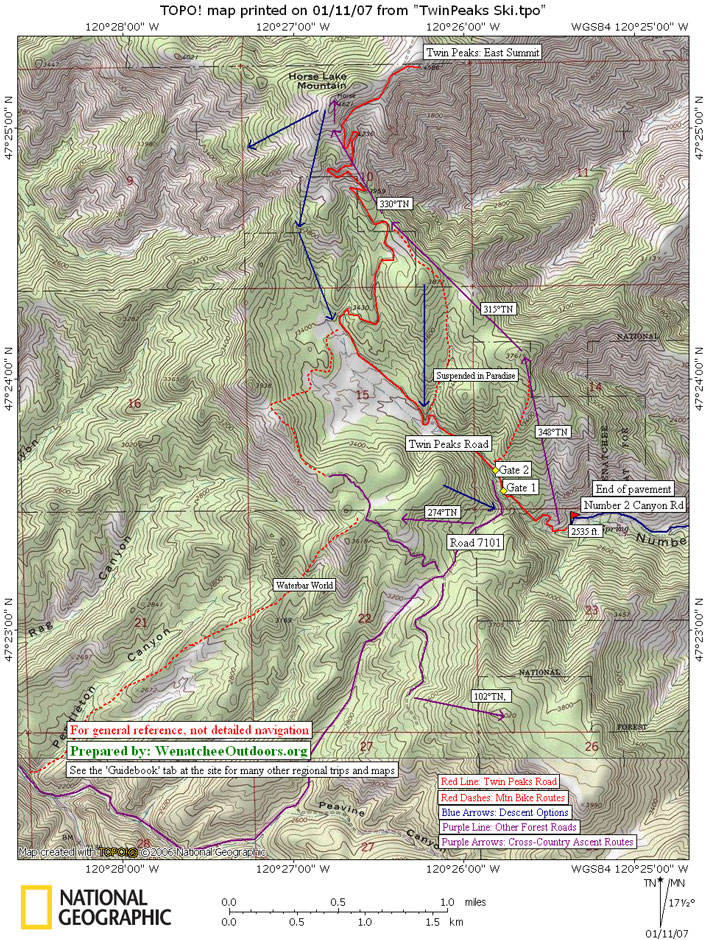