Photo: Near the high point of this loop looking at Diamond Head.

“Why am I always carrying you? Why isn’t it ever the other way around?”

“Because I’m a person and you’re a mountain bike”

“Bikes were made by people to carry people. That’s your purpose.”

‘But I have my own concept of purpose…and of what I want.”

“Then why are we having this conversation?”

The bike has me. Either this voice I’m hearing means I’m certifiably unhinged or there’s more consciousness in metal than I thought. Maybe before I commit myself to the care of a shrink, I should bend a bit to the grumbles of the bike — you know, see what happens.

To make lemonade out of this sour pact, it seems sensible to hike the bike up ground that’s too steep or uneven to ride and to return via a trail that’s longer and smoother. And, when you study maps from this perspective, there are quite a few loops and traverses where this devil’s deal makes sense.

As an initiation tour, I start with a short loop near Blewett Pass. The route starts from the Tronsen Road and follows ski trails I’m familiar with from winter use. For the first mile, we ride up old dirt roads.

“I thought you were going to carry me uphill.”

“I said ‘most’ of the uphill. Your time is coming.”

Photo: The faint tread along in the wooded portions of the XC15 Trail.

Soon we’re at the XC15 Trail cutting below the east face of Diamond Head and climbing toward Windy Knob. For a few minutes we alternate who is riding whom; then it becomes apparent I should just be the mule. I tie the bike to my pack and walk.

Photo below: talus slopes along the eastern flanks Diamond Head.

Photo Right: No country for old bikes…or for new bikes for that matter. Definite hike-a-bike country.

After 90 minutes of negotiating a faint trail, rocky sidehills, and undulating boulder fields, I reach a pass on the south ridge of Windy Point. From here, the route is likely to be ridable. “Time to earn your keep.”

We reverse positions and, soon, we are rolling along at a much faster clip. We intersect and follow the Table Mountain Trail, reach Haney Meadows, find the Tronsen Meadows Trail, and blast downhill toward Highway 97. Most of the time the going is good but, on anything steep, the motorized dirt bikes frequenting the area have badly rutted the trails by spinning their tires as they motor uphill through the fragile soill. “Malignant motorcycles,” I fume.

“Watch it!” the bike snaps back. “Those are my brothers.”

“Brothers or not, they can rot for creating this dust swamp and these deep ruts.”

“Well, how do you like rolling through this swill your brothers left behind for you?”

“It’s not the fault of machines –it’s the poor ethic of the pilots that has trashed segments of this trail.”

Photo: A segment of trail damaged by motorized use of a trail that’s too steep for the soil conditions. Because dirt bikes are causing the damage, good form would have motorized users working together to re-build these steep, rutted areas with man-made armoring (e.g., waffle-patterned concrete blocks) that supports the usage.

We roll on with me occasionally dismounting to walk the steepest sections of trails that are too rutted to ride safely. Soon we’re off the trail and speeding rapidly down the final segment of dirt road returning to the start of the tour. The road would be boring to walk, but on a bike it’s pure entertainment as we dodge potholes, hop small water bars, and fly past a vehicle that is bumping slowly downhill. We brake to a stop in front of the car.

“We doing this kind of trip again?” the bike asks hopefully.

It’s been an inane outing – I could definitely run and probably walk this loop faster. But being limited to feet alone would have been half as much fun. I’m also thinking of other possibilities: longer routes where the downhill would be stretched over many miles, or traverses where the bike would provide efficient transportation back to the start. It seems that trips where you are part mule, part master have a place in the grab bag of bike adventures.

“I think we can negotiate something.”

Skill: Hikers 2+. Mountain Bikers 2+ to 3-. Hikers will have talus fields to cross and will want reasonable navigation skills. Mountain bikers will be carrying the bike much of the way uphill and then have a fairly steep descent returning them to the start. Trail runners who try the loop will find that about half the route is suited to running — the rest is better-suited to fast walking so as not to not twist an ankle.

Access. Drive Highway 97 toward Blewett Pass and park 0.8 miles north of the pass at the highway’s intersection with the Tronsen Road (Road 7240). Park on the east side of the highway (elevation: 3910 feet). No permit is needed.

Permits: None needed for this trip.

Other info: Most of this route is within the Tronsen Meadows Non-Motorized winter recreation area. The trails here are seasonally closed from October 15 until June 15 to motorcycles, ATVs, snowmobiles, etc. This map shows other trails in the area with a seasonal closure to motorcycles

Leave It Better than You Found It. This should be every user’s goal. Pick up trash left by others, pull noxious weeds along your route, throw branches over unwanted spur trails, don’t ride or walk wet trails when you’re leaving ruts/footprints deeper than ¼ inch, etc… 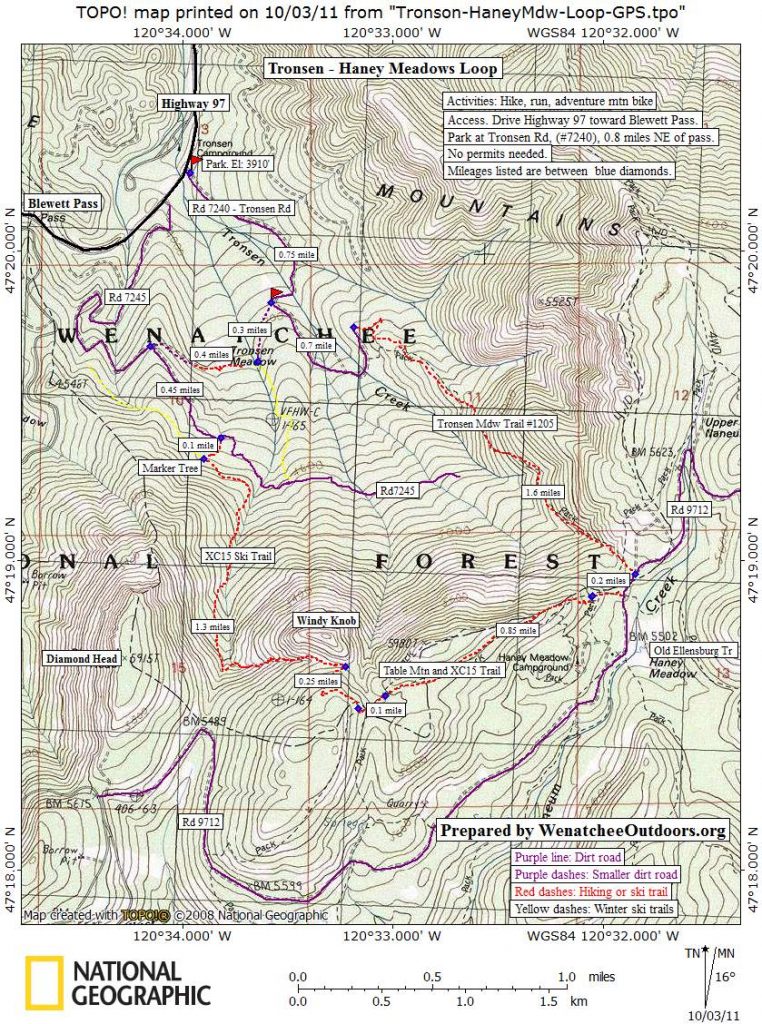